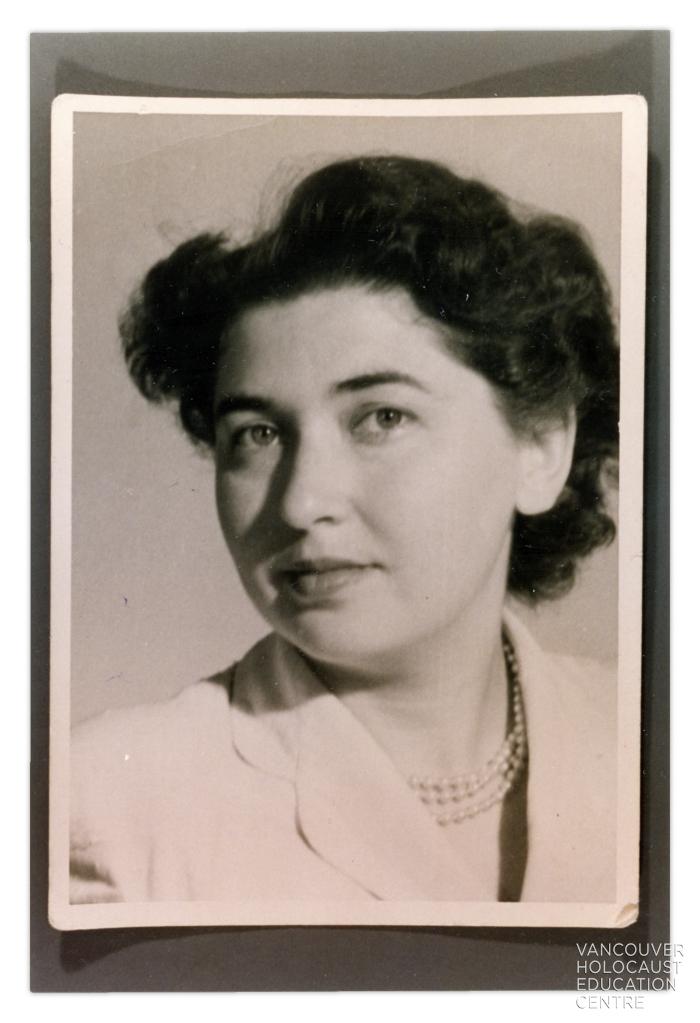 IdentifierRA075
Extent & Medium1 textual record
36 photographs
3 artefacts
Date[c. 1921 – 199-?]
CreatorHoyd, Frances
Administrative/Biographical HistoryFrances (Franceska Anna) Hoyd (Hajduska, Jajduska; née Schön) was born on December 1, 1918 in Mohács, Hungary to father John (Janos, Jeno) Schön (b. 16 June 1892, d. 1985) and mother Sarika (Sarolta) Schön (née Singer; b. 4 April 1889, d. June 1944). Her father was a well-off merchant born in Pécs, Hungary; her mother was from Sárpilis, Hungary. Sarika had a child from her previous marriage, István (b. 11 February 1915, d. 1943), who took the Schön last name as a child. Frances’s parents owned a textile store, and she was raised in a secular, middle-class Jewish home with a large extended family. In school she studied piano as well as German, French, Italian, Latin and English.

In 1935 the family moved to Budapest, Hungary, where she worked under a dermatologist. Around the mid-1930s Frances met her future husband, George Hoyd (Hadjuska, Jajduska; b. 1 January 1914, d. 1961). George was born in Hrtkovci, Austria-Hungary (present-day Serbia), and he was a mechanical engineer in the shoe-making industry. George and Frances married on October 26, 1942. Around 1940, Frances’s brother István was called to work at a labour camp in Russia, where he contracted pneumonia and died in 1943. In 1942, Frances’s father John was falsely accused of selling beef on the black market and taken to a military prison outside of Budapest. George Hoyd was called for labour in Russia shortly after he and Frances married.

Frances and her mother attempted to flee Budapest when the Nazis occupied Hungary in March 1944. They were caught and deported to Auschwitz, where her mother was subsequently murdered in June 1944. Frances covertly joined a group selected for forced labour at a flax factory in the Parschnitz labour camp, just northeast of Prague, Czechoslovakia (current-day Czech Republic).

Parschnitz was liberated by the Red Army on May 11, 1945. Frances returned to Budapest and reunited with her father; together they discovered that at least forty-one family members had been killed in the Holocaust. George returned from Russia to Budapest in September 1945. In 1948 Frances gave birth to their daughter, Marianne. That same year, the Second Hungarian Republic nationalized much of its industry, and Frances, George and Marianne left with false papers. They first moved to the newly formed State of Israel, where Frances got extremely ill and was forced to leave. They then lived in Barcelona, Spain and Paris, France, until they immigrated to Quebec, Canada in 1950.

The Hoyd family moved frequently between multiple cities and towns in Quebec as George found work in factories. They were joined by Frances’s father John in 1957, along with multiple Hungarian immigrants who left the country after the 1956 Hungarian Revolution. George was often in poor health following the Second World War and died suddenly in 1961. Frances moved from Montreal to Sydney, Australia in 1973 and then settled in Vancouver, BC, in 1986. She was regularly active in the local Jewish community, and participated in a multi-generational Holocaust art initiative called the Gesher Project. Frances passed away from pneumonia on January 9, 2014, in Vancouver.

Scope & ContentFonds consists of three series of records collected by Frances Hoyd relating to the Second World War and her life in Hungary and Canada. Records include photographs depicting Frances Hoyd, her family, friends and family monuments in Hungary and Canada before and after the war, three pieces of currency from the Buchenwald concentration camp and a piece of correspondence.

Accessions note: Item 93.08.0039a deaccessioned and moved to the donor file in 2022. Item 93.07.0122 deaccessioned in 2022.
System of ArrangementArranged following the original order in FileMaker Pro.
RightsResearchers are responsible for determining the copyright statuses and appropriate use or reuse of materials.
Rules or ConventionsArchival items described using RAD and ISAD(G). Museum items described according to CDWA.
Archivist's NoteArchival items arranged and described by Chase Nelson in 2022. Museum items described by Caitlin Donaldson in 2022.
Date of Description2022
Related Units of DescriptionGesher Project fonds

Frances Hoyd fonds (RA075)
Fonds consists of three series of records collected by Frances Hoyd relating to the Second World War and her life in Hungary and Canada. Records include photographs depicting Frances Hoyd, her family, friends and family monuments in Hungary and Canada before and after the war, three pieces of currency from the Buchenwald concentration camp and a piece of correspondence.