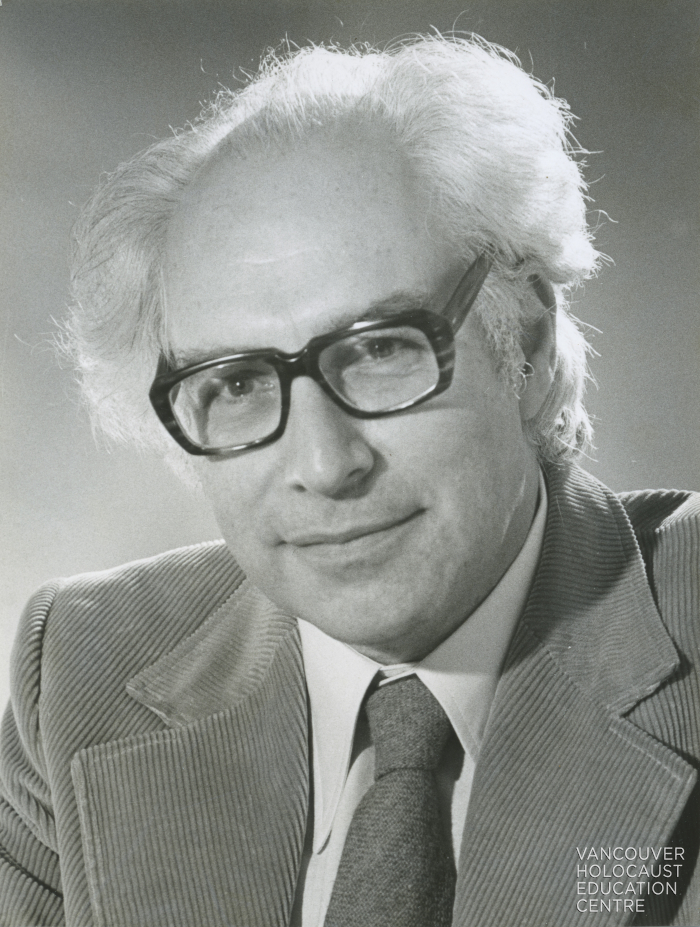 IdentifierRA008
Extent & Medium130 cm of textual records
53 photographs : black and white, colour
1 flash drive
6 objects
Date1924–2010
CreatorHerbert, John David
Administrative/Biographical HistoryJohn David Herbert (birth name Heinz Herbert Karpowitz, b. March 26, 1924, in Berlin, Germany) was from an affluent Jewish family, the second child of Otto Karpowitz and Frieda Abraham. He had two sisters: Inge Johanna Karpowitz (b. 1921) and Ellen Ruth Karpowitz (b. 1929). Otto Karpowitz was the owner of the Sportspalast in Berlin, a popular venue for the Nazi Party’s speeches and rallies, and heard Adolf Hitler’s plans to conquer Europe and eliminate the Jews. He moved the family to The Hague, Netherlands, in 1931. In 1937, Otto, once again fearing danger, brought John to England, enrolling him at Lindisfarne College, a private school. He left John at school and never returned. From 1940 to 1941, John was interned at Huyton Alien Internment Camp, near Liverpool. In the Netherlands, John’s mother and sisters survived the Holocaust in hiding. His father did not survive; he was arrested and died in Auschwitz in 1944.

John died on March 25, 2011, in Victoria.
Scope & ContentFonds consists of memoirs, correspondence, photographs, vital records, travel documents, financial documents, publications, newspaper and magazine clippings, handwritten notes and drawings, maps, conference papers and artefacts relating to the life of John Herbert. Records chronicle John Herbert’s personal life, pursuit of higher education, career history, hobbies, travels and struggle to attain compensation for the properties seized from his family during the Second World War. Fonds has been arranged into the following series: JH memoirs series (1938–2010), Karpowitz family series  (1939–2005), JH career documents series (1945–1988), JH inheritance and claims documents series (1924–2010), JH correspondence series (1955–2005), Research resources and notes series (1972–2005), Travel documents series (1946–1986), Inventions documents series (1979–1984), JH clippings series (1972–1988) and JH artefacts series.
Archival HistoryRecords were maintained by John Herbert until his death in 2011. As executor of John Herbert’s estate, Anne Noonan maintained the records until their donation.
Immediate Source of Acquisition or TransferRecords donated by the Estate of John Herbert to the VHEC in 2011, 2012, 2014 and 2016.
AccrualsNo further accruals are expected.
LanguageEnglish, German, Dutch, Malay, Hebrew
System of ArrangementThe original order of the fonds has been maintained where it was discerned. The fonds has been arranged into ten series which reflect the major activities of the creator. The items within most files have been kept in the order maintained by the creator. Select records only have been described at the item level. Other items have been digitized and scans used to illustrate fonds, series and file-level descriptions. Consult the archivist for more information.
RightsDonor relinquished rights to materials in fonds upon their donation to the VHEC but the fonds contains third-party materials for which copyright was not transferred. Researchers are responsible for determining the appropriate use or reuse of materials.
Rules or ConventionsISAD(G) informed by RAD.
Date of DescriptionPrepared by Sarika Kelm in November 2016. Updated January 2017.