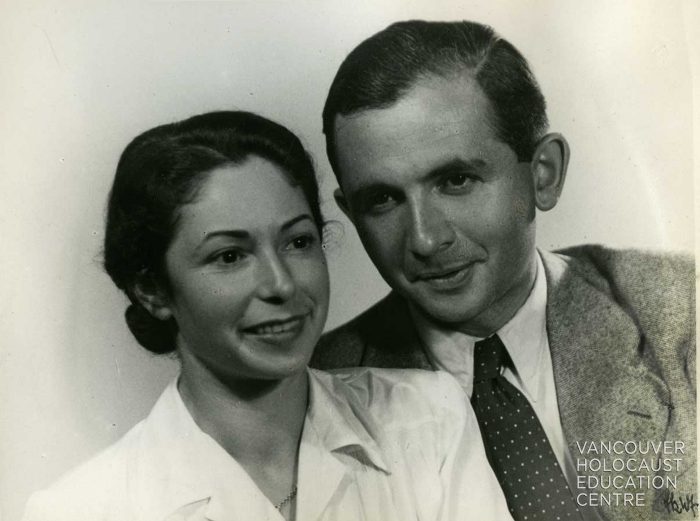 Rose Sonner died in 1971. Eric Sonner remarried in 1981 to Rita Edna Israels, who died in 2003. Eric Sonner died in 2009.
Scope & ContentFonds consists of vital statistics records, administrative documents, drawings, publications, educational certificates, academic papers, photographs, correspondence, letters of reference and audio-visual testimony relating to the life and work of Eric and Rose Sonner. Records detail the life events, career history, education, travels and emigration efforts of the family from the late 1940s until the mid-2000s. Collection is arranged in the following series: Terezín (1942–1945); Prague (1946–1949); Academic works (horticulture) (1947–1950); Correspondence and ephemera (1949–2000); Vital statistics records (Canada) (1949–2007); Eric Sonner testimony ([194-]–[before 2009]); and Photographs ([192-], 2016).
Archival HistoryAccessions 2012.002, 2016.006, 2018.036
Immediate Source of Acquisition or TransferRecords were maintained by Rose and Eric Sonner until their deaths in 1971 and 2009 respectively, after which time they were kept by their daughters, Nora and Eve. Nora Stevenson donated materials to the VHEC in 2012. A second donation was received from Eve Sonner in 2016. A prayer book used by Eric Sonner, dated 1934, was donated in 2018 by Eve Sonner.
AccrualsNo further accruals are expected.
LanguageCzech, English, German
NoteSelect items only have been described at the item level. Other items have been digitized and scans used to illustrate fonds, series and file-level descriptions. Consult the archivist for more information.
System of ArrangementOriginal order has been preserved where it existed. Series were developed by the archivist to reflect the functions and existing organization of the records. See Sonner research file for additional information.
RightsDonors relinquished rights to materials in fonds upon their donation to the VHEC but the fonds contains third-party materials for which copyright was not transferred. Researchers are responsible for determining the appropriate use or reuse of materials.
Rules or ConventionsISAD-G, informed by RAD
Date of DescriptionFinding Aid prepared by Myron Groover in June 2013. Updated August 2016 and 2019 by Shyla Seller with description of accrual.