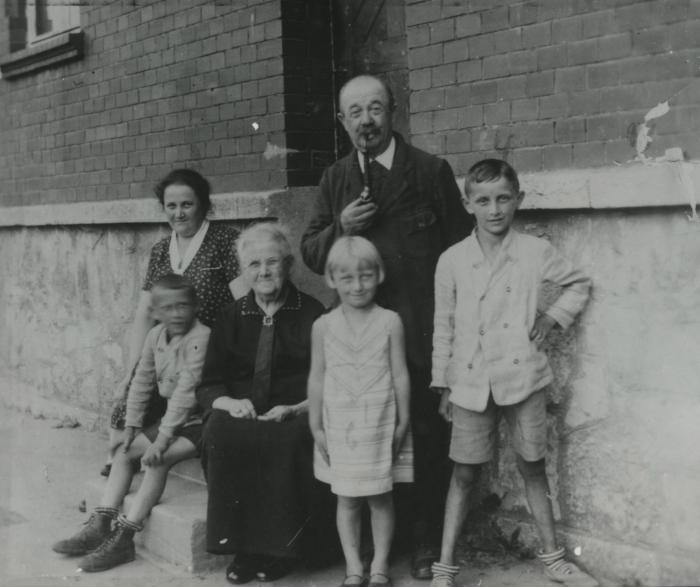 IdentifierRA005
Extent & Medium7.5 cm of textual records
circa 150 photographs: black and white, colour
1 floppy disk
12 objects
4 pieces of currency
1 book
Date[192-]–2008
CreatorRosengarten family
Administrative/Biographical HistoryThe Rosengartens were a Jewish family who lived in Themar, Thüringen, Germany, until their escape to Shanghai, China, in 1939. The documents in this fonds pertain mostly to Manfred Rosengarten (b. July 15, 1921, in Themar, Thüringen, Germany) and his son, Andrew Manfred Rosengarten (b. April 8, 1950, in Martinez, California, United States).

Manfred died November 1, 1987, in Martinez, California. Andrew currently lives in Surrey, British Columbia.
Scope & ContentFonds consists of scrapbook and supplemental materials, correspondence, photographs and family history documents relating to the lives of the Rosengarten family. Fonds has been arranged into the following series: Themar, Thüringen scrapbook series ([192-]–1983), Manfred and Eveline Rosengarten documents series (1945–2008), Andrew Rosengarten family history documents series (2000–2002), Rosengarten family photographs series (1986–[200-]), Rosengarten family artefacts series (circa twentieth century) and Rosengarten family collected books series (1942).
Immediate Source of Acquisition or TransferScrapbook, correspondence and photographs maintained by Manfred Rosengarten until his death in 1987. Materials were in the possession of Andrew Rosengarten prior to their donation to the VHEC in 2008, 2009, 2010, 2013, 2017 and 2018.
AccrualsFurther accruals are not expected.
LanguageEnglish, German, Yiddish
System of ArrangementThe original order of the fonds has been maintained where it was discerned. Fonds has been arranged into five series, which reflect the major activities of the Rosengarten family, as well as thematic divisions as it came to the VHEC.
RightsDonor relinquished rights to materials in fonds upon their donation to the VHEC but the fonds contains third-party materials for which copyright was not transferred. Researchers are responsible for determining the appropriate use or reuse of materials.
Rules or ConventionsISAD(G) informed by RAD
Date of DescriptionPrepared by Sarika Kelm in November 2016. Updated July 17, 2017 and August, 2019 with description of accrual..
Existence and Location of Originals"Mentschlikhkeit," article by Sharon Meen, published in Zachor no. 1, January 2008, pages 8-10.
Existence and Location of CopiesJuden in Themar - Their Voices Live On (website copyright Sharon Meen)