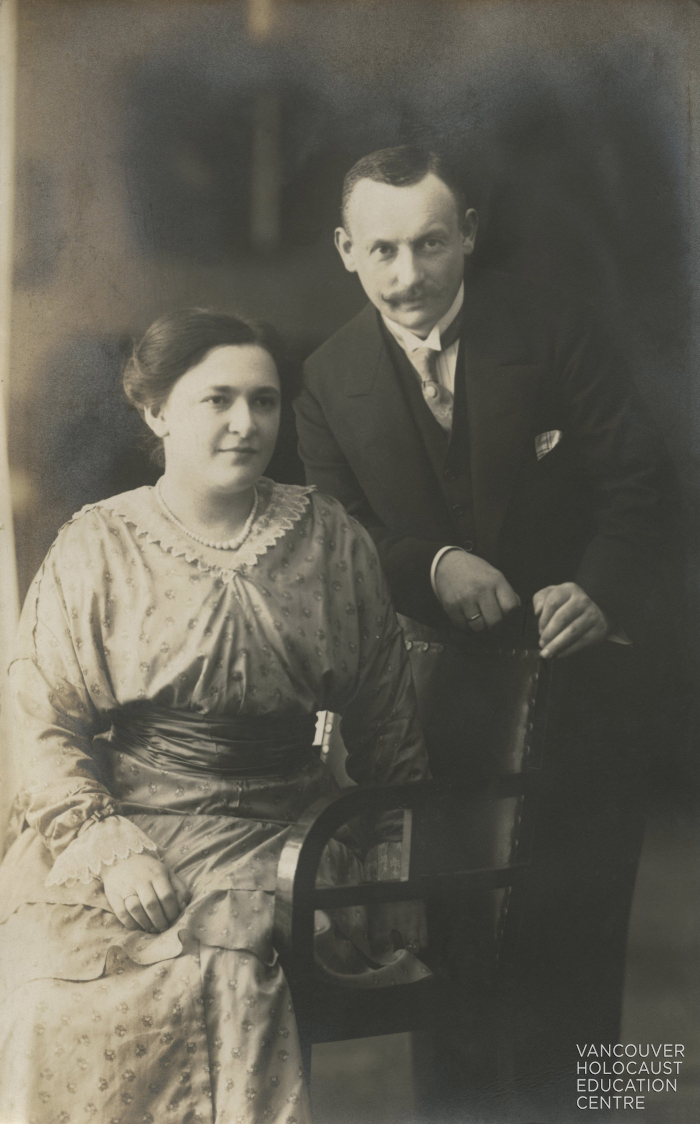 Siegfried Bick was born to Simon Bick (b. 1846; d. 1907) and Rosa Rosenthal (b. 1841; d. 1923). He had six brothers and sisters: Max, Georg, Jenny, Regina, Bertha and Felix. After the death of his father in 1907, Siegfried and his brother, Max, purchased their parents’ clothing store from their mother. Siegfried married Johanna Munter in April 1912. They had a daughter the following year and, in 1919, they had a son, Werner.

The Bick family home was vandalized during Kristallnacht, on November 9, 1938. Siegfried and Werner were imprisoned. Siegfried was transferred to Sachsenhausen concentration camp and Werner was released after four days in the local jail. He immediately contacted his uncle, Georg, who lived with his family in Amsterdam, Netherlands. Georg promised to send a friend to help him cross the border. Werner sought refuge in Vaals and studied woolen fabric design at a textile school for two months.

Siegfried was released from Sachsenhausen on December 13, 1938. On February 5, 1939, Siegfried and Johanna arrived in Rotterdam and stayed at the refugee camp there. They were reunited with Werner soon after and the three of them moved to the Lloyd Hotel in Amsterdam, which was being used as a refugee centre. Siegfried, Johanna, and Werner were set to leave Europe the day before the start of Second World War, September 1, 1939. They traveled to Antwerp, Belgium, and almost did not make it aboard the Chilean ship, the Copiapó, for which they had already purchased tickets. The ship, which was the last to make it out of Hamburg, Germany, before the war began, arrived in Valparaíso, Chile, with around 300 passengers on board, on September 29, 1939. The Bicks, who were among ninety Jewish refugees aboard the Copiapó, settled near Santiago.

In Chile, the Bicks found success farming and operating a cheese-making business. In 1949, Werner married Ingrid and the two of them lived in Lo Espejo, a suburb of Santiago. They had four daughters: Olivia, Silvia, Jacqueline and Rosely. After Siegfried died in January 1966, Werner decided to move the family to North America and began searching for a new city to live in. Werner and his daughters, Olivia and Jacqueline, arrived in Vancouver, British Columbia, Canada, on January 13, 1969. The rest of the family soon followed. The Bicks owned a dairy farm in Aldergrove, British Columbia.

Johanna died February 26, 1979, in Abbotsford, British Columbia. Werner died April 26, 2010.
Scope & ContentFonds consists of photograph albums, loose photographs, books, memoir, table cloth and official documents relating to the lives of members of the Bick family. Fonds has been arranged into the following series: Werner Bick memoir series (2002), Prayer books series (1868–1933), Bick family photographs series ([1891?]–[200-]), Siegfried and Johanna Bick emigration documents series (1938–1939) and Household object series ([before 1979]).
Archival HistorySeries 3, Collected books series, was removed July 2018 and books in this series removed from the collection. Inventory of books collected by the Bick family is available.
Immediate Source of Acquisition or TransferFirst accrual donated by Ingrid Bick in 2011. Second accrual donated by Ingrid Bick in 2017. Records were maintained by Werner Bick until his death in 2010.
AccrualsFurther accruals are possible.
LanguageEnglish, German, Hebrew, Spanish
System of ArrangementCollection has been arranged into five series which reflect the major activities of the Bick family, as well as thematic divisions as it came to the VHEC. Select photographs only have been described at the item level. Other items have been digitized and scans used as media representations for series, sub-series and file-level descriptions. Consult the archivist for more information.
RightsDonor relinquished rights to materials in fonds upon their donation to the VHEC but the fonds contains third-party materials for which copyright was not transferred. Researchers are responsible for determining the appropriate use or reuse of materials.
Rules or ConventionsISAD(G) informed by RAD
Date of DescriptionPrepared by Sarika Kelm in November 2016. Revised 2017 to include description of accrual. Revised 2018.