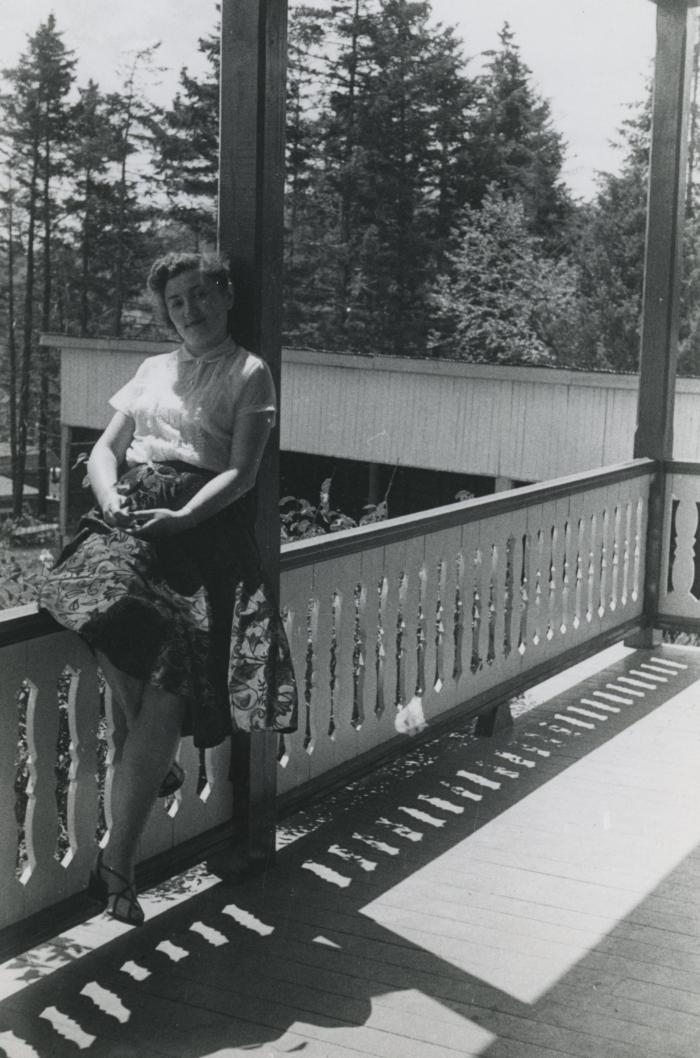 IdentifierRA013
Title NoteTitle based on contents of fonds.
Extent & Medium1.25 cm of textual records
40 photographs : black and white
Date[1912?]–1987
CreatorPhillips, Jennie
Administrative/Biographical HistoryJennie Phillips (birth name Jennie Lifschitz, b. July 8, 1924, in Montreal, Quebec, Canada) was perhaps the only Canadian-born Holocaust survivor. Jennie was born to Abraham Lifschitz (b. 1899; d. 1970) and Paula Blumberg (b. 1897; d. 1941), Jewish immigrants from Liepāja (Libau), Latvia. Their eldest son, Ruben, was born in Liepāja in 1920. Jennie and her older sister, Dora (b. 1922; d. 2005), were born in Montreal. Shortly after Jennie was born, Abraham and Paula separated and Paula and the children left Montreal for Liepāja in November 1924. In Liepāja, Paula and the children lived in poverty. Jennie and her siblings were separated so that their mother could work. In 1931, Abraham sent for the two oldest children, Ruben and Dora, and they returned to Montreal to live with him. Jennie lived with her mother in Liepāja until her mother remarried in 1937 and moved to Telz, now Telšiai, Lithuania. Jennie went to live with her grandmother, Malke Blumberg (b. 1863; d. 1941).

Jennie Phillips died August 9, 2005, in Vancouver.
Scope & ContentFonds consists of photographs, vital records, personal notes, transcribed songs, correspondence and ephemera relating to the life of Jennie Phillips. Fonds has been arranged into the following series: JP photographs series (1912–1982), JP vital records series (1953–1979), JP personal papers series (1946–1987), Transcribed ghetto and camp songs series (1946), Stutthof Museum correspondence series (1984–1985) and JP ephemera series (1972).
Immediate Source of Acquisition or TransferPhotographs taken before 1945 possibly in Abraham Lifschitz’s possession until his death in 1970. Records maintained by Jennie Phillips until her death in 2005. Records maintained by her daughter, Rachel Mines, until their donation to the VHEC in 2011.
AccrualsNo further accruals are expected.
LanguageEnglish, German, Yiddish, Polish, French
System of ArrangementFonds has been arranged into six series which reflect the major activities of Jennie Phillips, as well as thematic divisions as it came to the VHEC. All photographs kept in the order they were in at the time of their donation and placed in enclosures for preservation purposes. Select records only have been described at the item level. Other items have been digitized as media representations of fonds, series and file-level descriptions. Consult the archivist for more information.
RightsDonor relinquished rights to materials in fonds upon their donation to the VHEC but the fonds contains third-party materials for which copyright was not transferred. Researchers are responsible for determining the appropriate use or reuse of materials.
Rules or ConventionsISAD(G) informed by RAD
Date of DescriptionPrepared by Sarika Kelm in December 2016.
Existence and Location of OriginalsJennie Lifschitz’s Poems: Written After Surviving Concentration Camps at the Montreal Holocaust Museum