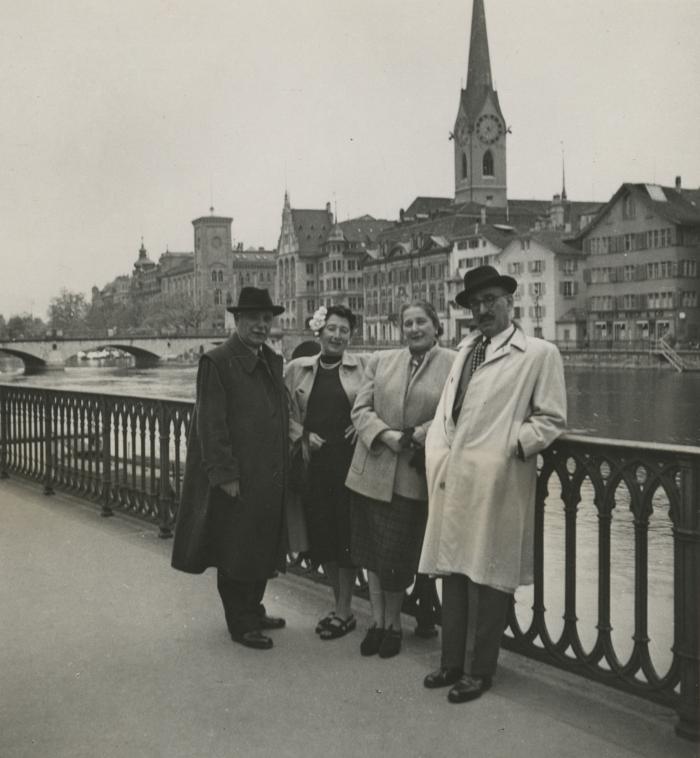 Julia died September 22, 1979, in Ottawa; Leo on June 2, 1985. Rosa died March 17, 1994.
Scope & ContentFonds consists of photograph albums and loose photos, personal records, passports, financial records, reparation and compensation claims forms, correspondence, notebooks and notes, ephemera and published materials relating to the lives of the Baltuch and Schmucker families before, during and after the Second World War. Fonds has been arranged into the following series: Baltuch, Schmucker family photographs series ([188-]–1964); Baltuch, Schmucker family personal records series (1906–1961); Josef and Rosa Baltuch emigration and immigration documents series (1943–1961); Household and financial records (1919–1984); Rosa Baltuch reparation and compensation documents series (1934–1966); Baltuch, Schmucker family correspondence series ([before 1941]–1980); Notebooks and notes series ([before 1994]); Baltuch, Schmucker family ephemera series ([before 1994]); Baltuch, Schmucker family artefacts series ([before 1994]); and Baltuch, Schmucker family collected books series (1930–1980).
Immediate Source of Acquisition or TransferRecords maintained by Rosa Baltuch after the deaths of Leo and Julie Schmucker and until her death in 1994. Records maintained by family friend, Micha Menczer, until their donation to the VHEC in 2010.
AccrualsNo further accruals are expected.
LanguageGerman, Romanian, English, Polish, Yiddish, French, Russian
System of ArrangementCollection has been arranged into ten series which reflect the major activities of the Baltuch and Schmucker families, as well as thematic divisions as it came to the VHEC. Select records, primarily photographs and some documents, have been described to the item level. Other items have been digitized as media representations of fonds, series and file-level descriptions.
RightsDonor relinquished rights to materials in fonds upon their donation to the VHEC but the fonds contains third-party materials for which copyright was not transferred. Researchers are responsible for determining the appropriate use or reuse of materials.
Rules or ConventionsISAD(G) informed by RAD
Date of DescriptionPrepared by Sarika Kelm in February 2017. Revised in September 2019 by Shyla Seller to reflect deaccession of suitcase.