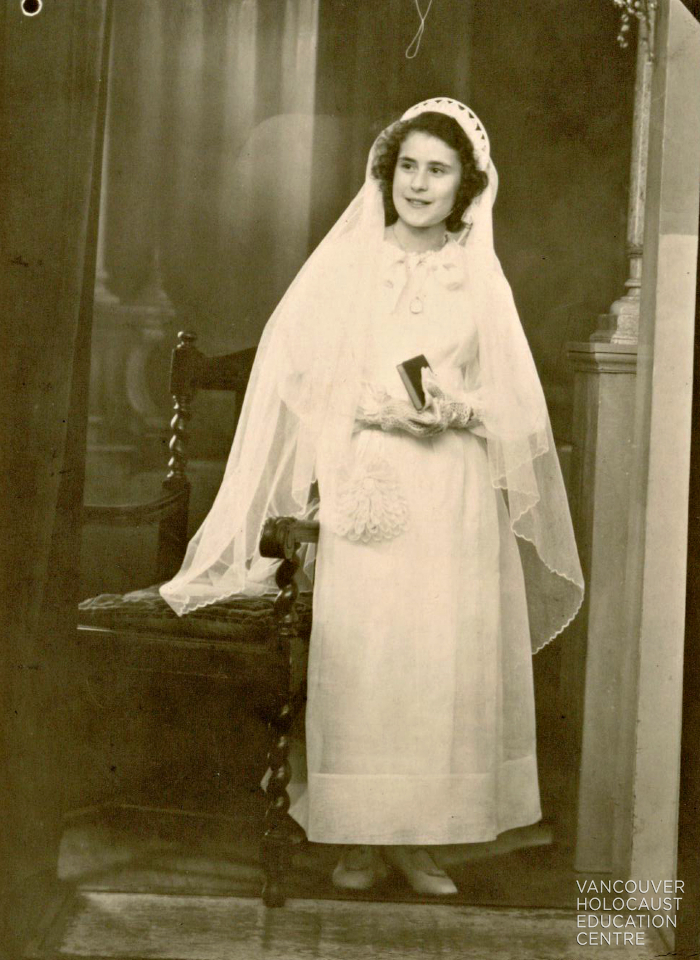 IdentifierR018
Title NoteTitle of fonds based on provenance of the records.
Extent & Medium4 photographs
4 documents
1 object
Date[194-]–1990
CreatorManes, Inge
Administrative/Biographical HistoryInge (Kollmann) Manes was born in Vienna, Austria, on August 19, 1933. Her sister, Lydia, was born July 17, 1930. Their parents were Stefka Taube Kollmann (nee Lande, born in Natasov, Poland) and Hubert Kollmann (born 1903, in Vienna, of Czech parents). The Kollmanns owned a general store in Heidenreichstein, a small border town between Czechoslovakia and Vienna.

In 1979, Alice Schiffer De Ruyck was recognized by Yad Vashem as Righteous Among the Nations for hiding Inge and her sister. She and Inge remained in touch in the years following the war. Alice Schiffer died in September, 1996.
Scope & ContentFonds consists of Manes' Star of David badge worn in Belgium, as well as documents and photographs documenting her and her family's experience of the Holocaust in Belgium. Fonds has been arranged into two files: Kollmann family file ([194-]–1962) and Alice Schiffer file ([1962?]–1990).
Immediate Source of Acquisition or TransferRecords maintained by Inge (Kollmann) Manes until their donation to the VHEC in two accessions: 1996.020 and 2010.010.
LanguageFrench, English
System of ArrangementFonds has been arranged into two files reflecting the subjects of the records.
RightsDonor relinquished rights to materials in fonds upon their donation to the VHEC but the fonds contains third-party materials for which copyright was not transferred. Researchers are responsible for determining the appropriate use or reuse of materials.
Rules or ConventionsISAD(G) informed by RAD
Date of DescriptionPrepared by Shyla Seller in June 2017.
Related Units of DescriptionNo Longer Alone: The Inge Manes Story Zachor, Winter 2011 issue