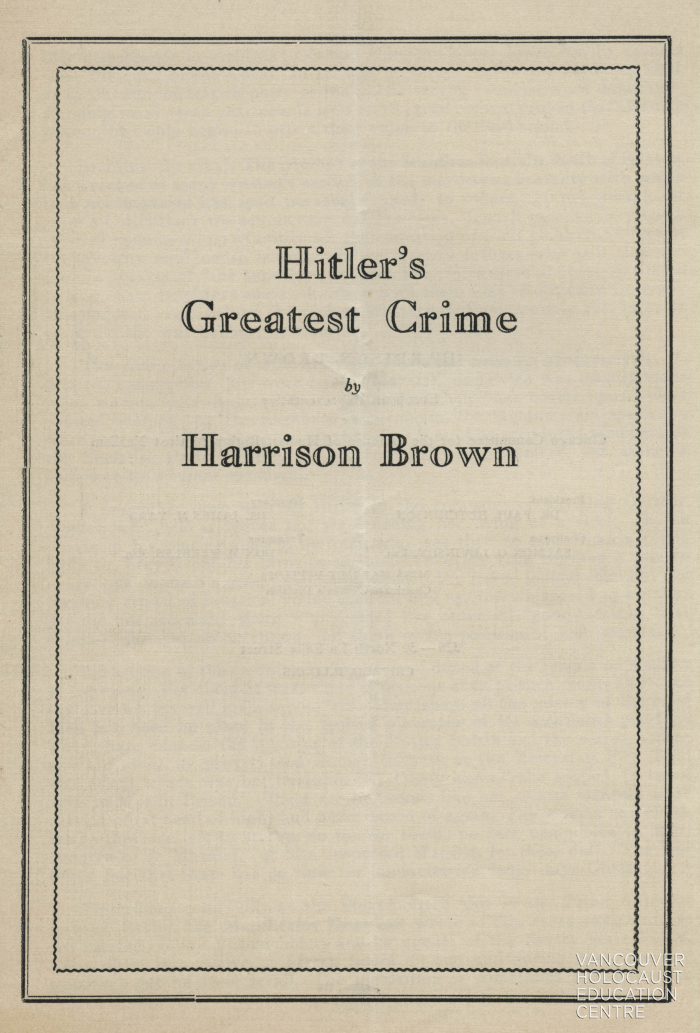 IdentifierRA019
Title NoteTitle based on provenance of collection.
Extent & Medium14.5 cm textual records
1 scrapbook
Date1933–1951, 1998
CreatorBrown, Harrison and Hilary
Administrative/Biographical HistoryJoan Hilary Brown (nee Newitt) was born on March 21, 1909 in Helensburg, Scotland. Like many of her peers, she went by her middle name and was known as Hilary Brown. Upon completion of her school studies Brown studied French and German in Geneva and Frankfurt with the aim of becoming an interpreter. During her time at the University of Frankfurt (1929 -1932) Hilary met Harrison Brown, a journalist, who would become her lifelong partner.

Brown published Women Must Choose, a study of women in democratic, socialist and fascist states, in 1937, and toured the US to promote the book. She received a contract for a second book, Half of Humanity, which was never published. That same year she and her husband moved permanently to Hornby Island, British Columbia. Throughout the 1950s, Brown was a regular contributor to CBC Radio, producing broadcasts on an array of subjects.

In 1973, the governing New Democratic Party passed legislation to create an Island’s Trust to oversee islands located in the Strait of Georgia and Howe Sound. Brown was appointed as the inaugural Director and Chair of the Islands Trust, a post she held for two years.

In the late 1970s and 1980s, Brown embarked on a series of trips to China and produced an unpublished study entitled "Tomorrow’s Ancestors," which examined the plight of the elderly. The venture was supported by the Canada Council and the National Film Board.

In 1991, Brown co-founded the Gulf Island Guardian and in 1992 received the Governor General’s Medal. She passed away on Hornby Island on September 28th, 2007.
Scope & ContentCollection consists of antisemitism- and anti-fascism–related material collected and/or created by Harrison and Hilary Brown. Records include booklets, pamphlets, propaganda, news clippings, articles and reports by Harrison Brown, a scrapbook containing notices of his speaking tours and private correspondence, in German with translations by Hilary Brown. Collection has been arranged into the following series: Pamphlets and other printed works (1933–1951); Official Nazi material on women (1935–1946); Articles on and by Harrison Brown dealing with anti-fascism (1932–1943); Various newspaper and magazine articles on Nazism (1933–1960); Personal letters and reports from the Hitler era (1932–1933); Early Nazi propaganda (1932–1936; 1998); Scrapbook of Harrison Brown (1934).
Archival HistoryAccession 1998.009
Immediate Source of Acquisition or TransferRecords were in the custody of Hilary Brown prior to their donation to the VHEC in 1998.
AccrualsNo further accruals are expected.
LanguageGerman, English, French, Hebrew
NoteSee the April 1999 issue of Zachor for more information about this collection. https://www.vhec.org/wp-content/uploads/Zachor_No.2_April_1999.pdf
System of ArrangementCollection was arranged in 1998 according to classifications established by the creator.
RightsDonor relinquished rights to materials in collection upon their donation to the VHEC but the collection contains third-party materials for which copyright was not transferred. Researchers are responsible for determining the appropriate use or reuse of materials.
Date of Description1998; revised 2021 with item-level descriptions ingested from 1998 Filemaker Pro database records with support from Library and Archives Canada Documentary Heritage Communities Program.
Related Units of DescriptionHilary Brown fonds [SFU Library Special Collections & Rare Books]