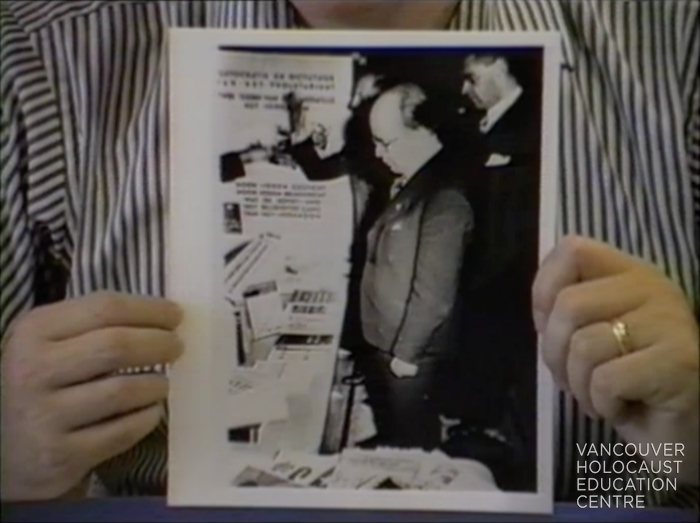 IdentifierRA020
Title NoteTitle based on provenance of collection
Extent & Medium2 albums (including 246 photographs : prints)
164 photographs : prints
52 posters
31 postcards
58 documents
17 booklets
2 newspapers
32 pins
2 medals
2 badges
2 textiles
7 bank notes
7 scrips
2 coins
1 menorah
Date1770–1981, predominant 1930-1945
CreatorMoogk, Peter
Administrative/Biographical HistoryPeter N. Moogk was born in 1943 in West Chiltington, England, to Canadian parents. The family immigrated to Canada in 1946, arriving on the Norwegian ship Stavangerfjord. Moogk’s father was a Military and Air Attache; his family was stationed at the Canadian Embassy in The Hague from 1954–1957. When Moogk was attending school in the Netherlands, he heard first-hand accounts of the German occupation and, in 1957, attended a Dutch Quaker School at Kasteel Eerde. The school was established in 1934 to provide German Jewish students with an education free of Nazi discrimination. After the German invasion of May 1940, fourteen students from the school were unable to avoid capture and died after deportation. When Moogk was a student at the school, classes were taught primarily in Dutch, with some in English; there were a few Jewish teachers as well as students.

Moogk was married in 1965 to Susan Rosa Tovell, and has three children: Jonathan, Benjamin and Anna. He received a B.A. Hons from the University of Toronto (Trinity) in 1965, and an M.A. in History from the University of Toronto in 1966. He was a student in the French Canada Studies Program at McGill University from 1966-1967, and received a PhD from the University of Toronto in 1973. Moogk is Professor Emeritus (History) at the University of British Columbia; his research interests include the social and cultural history of early French Canada, including Acadia; twentieth-century Canadian military history; and the Second World War. Moogk is the author of four books, most recently, La Nouvelle France: The Making of French Canada (East Lansing: Michigan State University Press, 2000), winner of the Heggoy Prize in French Colonial History.
Scope & ContentCollection consists of records gathered or purchased by Peter N. Moogk as a result of his interest in Second World War history. Records document the Holocaust era in Europe, in particular the Netherlands, under the German occupation government. Collection has been divided into the following series: Photographs ([193-]–194-]; 1981); Posters (1940–1946); Postcards ([193-]–[194-]); Correspondence (1934–1987); Clippings and ephemera (1933–1945), Publications (1933–1945), Personal and military records series (1935–1945), Artefacts (1935–[1945]), Currency (1922–1945) and Declaratory documents (1770, 1772).
Immediate Source of Acquisition or TransferRecords were purchased or collected by Peter N. Moogk and donated to the VHEC in 1993, 1994, 2005, 2015, 2016, 2018 and 2019.
AccrualsFurther accruals are not expected.
LanguageDutch, English, German
NoteVideo recording of August 19, 1993 donor interview is available for viewing by request. Tapes 4 and 5.
System of ArrangementCollection was arranged into series by the archivist based on record function and form.
RightsDonor relinquished rights to materials in collection upon their donation to the VHEC but the collection contains third-party materials for which copyright was not transferred. Researchers are responsible for determining the appropriate use or reuse of materials.
Rules or ConventionsISAD(G) informed by RAD
Archivist's NotePrepared by Shyla Seller in October 2017. Revised in 2019 and 2021 with description of accrual.
Date of Description2017, rev. 2021