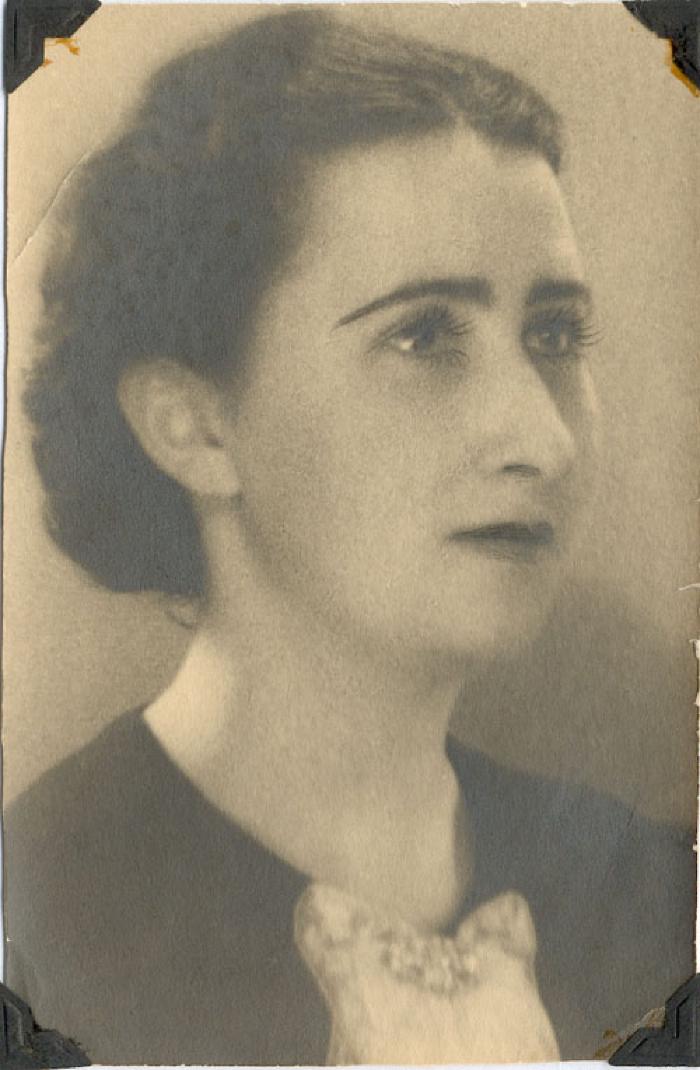 IdentifierRA023
Title NoteTitle based on provenance of fonds.
Extent & Medium4 notebooks
1.5 cm of textual records
4 photographs
2 armbands
Date[194-]–1974
CreatorTeitelbaum, Rebecca
Administrative/Biographical HistoryRebecca (née Buckman) Teitelbaum was born in Antwerp in 1909, to Abraham Backmann and Annie (née Stenfeld) Buckman. She married Herman Teitelbaum (born in Erdőbénye, Hungary, 1904), on April 13, 1938. ﻿﻿Before the Second World War, Teitelbaum lived in Anderlecht near Brussels and worked in the accounting department of a department store, À l’Innovation, in Brussels. Rebecca and Herman had three children, Anny (b. 1939), Christian (b. 1946) and Shirley (b. 1953), and raised Rebecca's nephew, Alex Buckman (b. 1939) after he lost both his parents in the Holocaust.

Teitelbaum and her family emigrated to Montreal via Halifax in 1951, arriving on the ship Conte Biancamano. She became a Canadian citizen in 1957. Teitelbaum passed away in December, 1999, in Ottawa.
Scope & ContentFonds consists of records relating to the pre- and post-war experience of Rebecca (née Buckman) Teitelbaum, Herman Teitelbaum and their family. Fonds is arranged into five series: Notebooks (1944–1945), Correspondence (1944–1945), Identification and related records (1938–1974), Photographs ([1941]–1947) and Objects [1944].
Archival HistoryAccession 1999.008; Accrual 2018.009
Immediate Source of Acquisition or TransferRecords were donated to the VHEC by Alex Buckman in 1999. Alex Buckman found the recipe book in his aunt Rebecca's belongings in 1997. Two armbands belonging to Jacques Backman, member of the Belgian resistance, were donated in 2018.
AccrualsFurther accruals are possible.
LanguageFrench, English, German, Flemish, Danish, Dutch
System of ArrangementFonds was arranged based on categories established when the records were first donated to the VHEC. Item-level descriptions are based on legacy Filemaker Pro database records. Select item descriptions only have been input into Collective Access. Other items have been digitized and scans used to illustrate fonds and series-level descriptions. Consult the archivist for more information.
RightsDonor relinquished rights to materials in fonds upon their donation to the VHEC but the fonds contains third-party materials for which copyright was not transferred. Researchers are responsible for determining the appropriate use or reuse of materials.
Rules or ConventionsISAD(G), informed by RAD
Date of DescriptionCollection arranged in November, 2017 by Shyla Seller. Updated August, 2018 to include description of accrual.