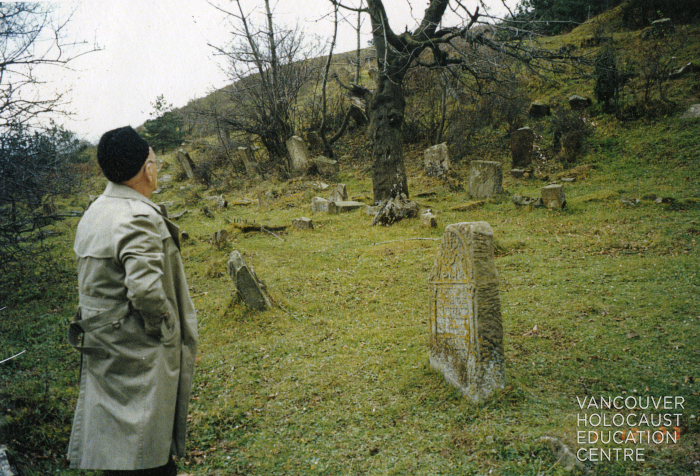 IdentifierRA025
Title NoteTitle based on provenance and contents of fonds.
Extent & Medium3.5 cm of textual records
32 laser printed photographs
1 photographed document
Date[194-]–2001
CreatorGardner, Jack
Administrative/Biographical HistoryJack Gardner (b. 1915–d. 2003) was a Holocaust survivor from Sambir and Staryy Sambor, formerly in Poland, now Ukraine. The Jewish population of Staryy Sambor was decimated by German soldiers in the war; Gardner lost his parents, two older sisters and many other relatives. Gardner enlisted in the Red Army circa 1941 and was assigned to the 216th Rifle Division, but was wounded in 1942 and received pensions in 1944–1945. He returned to Staryy Sambor in 1944 but nothing remained of the Jewish community of which he was a part. Gardner was a resident of the Foehrenwald Displaced Persons Camp in Germany in 1945–1949. He married Chaja Jachniuk in 1948; their first child, Moses Izrael, was born in the camp. The family emigrated to New York in 1949, and eventually settled in San Antonio, Texas. After his first wife passed away at age 45, Gardner remarried a woman with relatives in Victoria, BC. They moved to Victoria in 1981. Gardner had four children and eight grand-children.

In 1996, after years of writing letters to Soviet and Ukrainian authorities about the condition of the historic Jewish cemetery in his birthplace, Gardner hired Jawl & Bundon, a law firm in Victoria who arranged a meeting between Gardner and the Canadian Ambassador of Ukraine. This meeting led to years of advocacy and legal work and in 1999, Gardner received permission to restore the neglected Jewish cemeteries in Sambir and three mass graves in the Ralivka forest, where over 9,000 Jews from the Sambor ghetto were executed. He hired a local architect to plan and carry out the restoration, and establish a memorial to victims of Nazism and Fascism. In 2000, the City Council in Sambir ordered that work stop on the restoration after receiving a petition from Ukrainian nationalist organizations requesting that large crosses be put up in the Jewish cemetery to commemorate Ukrainians who may have been buried there. Gardner was opposed to erecting crosses in the cemetery. Gardner’s architect worked with the Sambir government to redesign the restoration project in order to respect any non-Jewish victims who may have been buried in the cemetery. The project cost approximately $200,000 US at the time. The cemetery was rededicated on October 24, 2001.
Scope & ContentFonds consists of records generated as a result of Jack Gardner’s role in the Red Army, his medical leave, residency in the Foehrenwald displaced persons camp, immigration to North America and his advocacy work in restoring Jewish cemeteries and mass graves in Sambir, L’viv Oblast, Ukraine. Records include correspondence, identification, permits, licenses, certificates, legal documents and clippings.
Immediate Source of Acquisition or TransferRecords were in the custody of Jack Gardner prior to their donation to the VHEC in 1993 and 2001.
AccrualsNo further accruals are expected.
LanguageRussian, Ukrainian, German, English, Hebrew, Yiddish
NoteSee also finding aid, survivor clippings file and research file. Select items only have been digitized and described at the item level. Other items have been digitized and used as media representations for fonds and series-level descriptions. Consult the archivist for more information.
System of ArrangementRecords are arranged following divisions established upon donation of the records to the VHEC. Some materials moved from survivor clippings file into collection, accrual 2001.018. Item-level descriptions based on legacy FileMaker Pro database records.
RightsMaterials available for research and education purposes only. Permission to publish, copy or otherwise use these materials must be obtained from the VHEC.
Rules or ConventionsISAD(G) informed by RAD
Archivist's NoteCollection arranged in December 2017 by Shyla Seller.
Date of Description2017