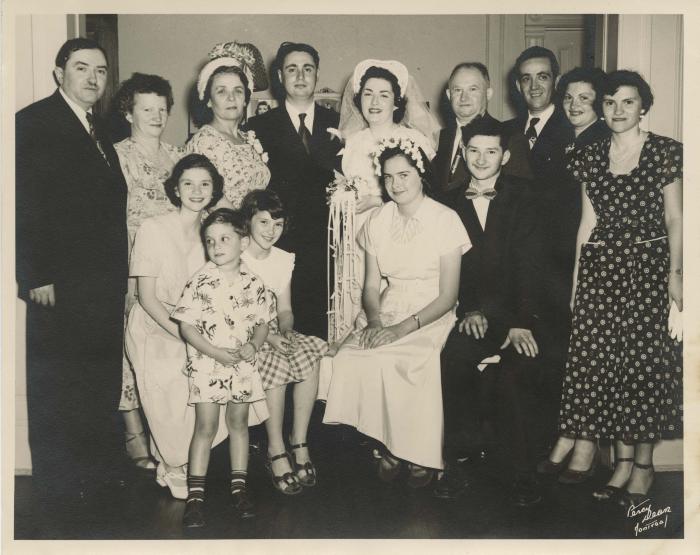 IdentifierRA029
Title NoteTitle based on provenance of fonds
Extent & Medium2 cm of textual records
23 photographs : prints
Date1917–[2015]
CreatorKnoll family
Administrative/Biographical HistoryBert Knoll (birth name Berthold Knoll, b. February 8, 1923, in Vienna, Austria) was an Austrian Jew from a family of Polish origin. He was born to Josef Knoll (b. May 11, 1897 in Stanisławów, Poland, now Ivano-Frankivs’k, Ukraine, d. November 19, 1938 in Vienna, Austria) and Regina (or Regine) Knoll (née Schmetterling, b. May 15, 1898 in Zaleszczyki, Poland, now Zalishchyky, Ukraine).

In the late 1990s, Bert and Molly moved to Ottawa to live closer to family. Bert spoke at schools, clubs and cultural organizations about his life experience in Vienna, his escape to England on a Kindertransport train and his life as an enemy alien in Canada. He was a committed philanthropist who donated to many charitable organizations. Bert Knoll died March 6, 2015, in Ottawa. Molly Knoll died June 27, 2007, in Ottawa. They are buried in the Mt. Pleasant Cemetery (Young Israel of Chomedey section) in Montée St-François, QC. Bert and Molly had two children, Joel and Jeff.
Scope & ContentFonds consists of personal records, passports, Canadian certificates of citizenship, Bert Knoll’s notes, speeches and drafts of his life writing and photographs taken in Austria, Germany, Israel and Canada. Most of the documents pertain to the Knoll family’s life in Austria until the Anschluss and Bert’s experience as an "enemy alien" in camps in England and Canada.

Fonds has been arranged into the following three series: Knoll, Klein family photographs series (1922–[2015]), Bert and Molly Knoll documents series (1929–2008) and Josef and Regina Knoll documents series (1917–1939).
Archival HistoryAfter the deaths of Molly and Bert, records were maintained by Joel Knoll until their donation to the VHEC, with the exception of Bert’s German passport, which Bert donated in 2009.
Immediate Source of Acquisition or TransferRecords were donated to the VHEC by Bert Knoll in 2009 and Joel Knoll in 2015 and 2019, 2021. Accessions 2009.007, 2015.002, 2015.004, 2019.027.
AccrualsFirst accrual by Bert Knoll in 2009. Second and third accruals donated by Joel Knoll to the VHEC on two occasions in 2015. Fourth accrual donated by Joel Knoll in 2019, 2021. No further accruals are expected. Accruals one through three were processed together.
LanguageCzech, Dutch, English, Hebrew, Hungarian, Italian, French, German, Polish, Russian
NoteSelect items only have been digitized and described to the item level. Other items have been digitized and used as media representations for fonds, and series and file-level descriptions. Consult the archivist for more information.
System of ArrangementArrangement into series by provenance and material form by the archivist.
RightsDonor relinquished rights to materials in fonds upon their donation to the VHEC but the fonds contains third-party materials for which copyright was not transferred. Researchers are responsible for determining the appropriate use or reuse of materials.
Rules or ConventionsISAD(G) informed by RAD
Archivist's NotePrepared by Lorenzo Camerini in August 2018. Revised in February 2019 and April 2019.
Date of Description2019