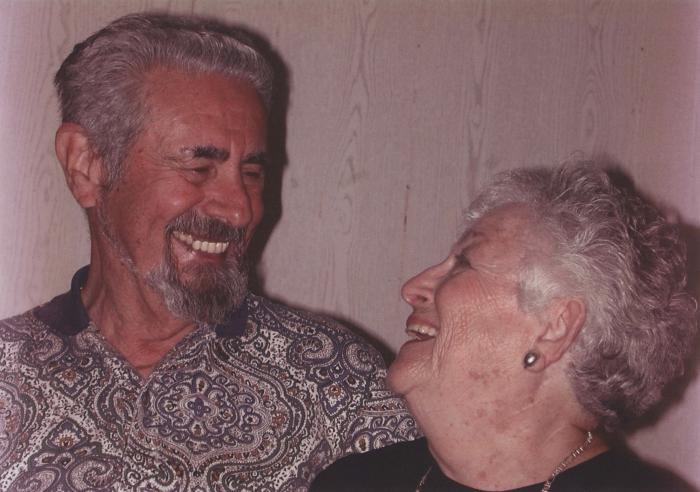 [Photograph of Bert and Molly Knoll, 199-]
Rights
Conditions on Use
Materials available for research and education purposes only.
Conditions on Reproduction and Publications
Permission to publish, copy or otherwise use these materials must be obtained from the VHEC.
Licensing

In the late 1990s, Bert and Molly moved to Ottawa to live closer to family. Bert spoke at schools, clubs and cultural organizations about his life experience in Vienna, his escape to England on a Kindertransport train and his life as an enemy alien in Canada. He was a committed philanthropist who donated to many charitable organizations. Bert Knoll died March 6, 2015, in Ottawa. Molly Knoll died June 27, 2007, in Ottawa. They are buried in the Mt. Pleasant Cemetery (Young Israel of Chomedey section) in Montée St-François, QC. Bert and Molly had two children, Joel and Jeff.
Scope & ContentSeries consists of loose photographs documenting the Knoll and Klein families before and after the Second World War in Austria, Germany, Palestine and Canada.
NoteUSB drive with three JPGs of family photographs provided by the donor available in research file.
System of ArrangementPhotographs are arranged chronologically by the archivist.
RightsMaterials available for research and education purposes only. Permission to publish, copy or otherwise use these materials must be obtained from the VHEC.

Knoll family fonds (RA029)
Fonds consist of personal records, passports, Canadian certificates of citizenship, Bert Knoll’s notes, speeches and drafts of his life writing and photographs taken in Austria, Germany, Israel and Canada. Most of the documents pertain to the Knoll family’s life in Austria until German Anschluss and Bert’s experience as an enemy alien in camps in England and Canada.