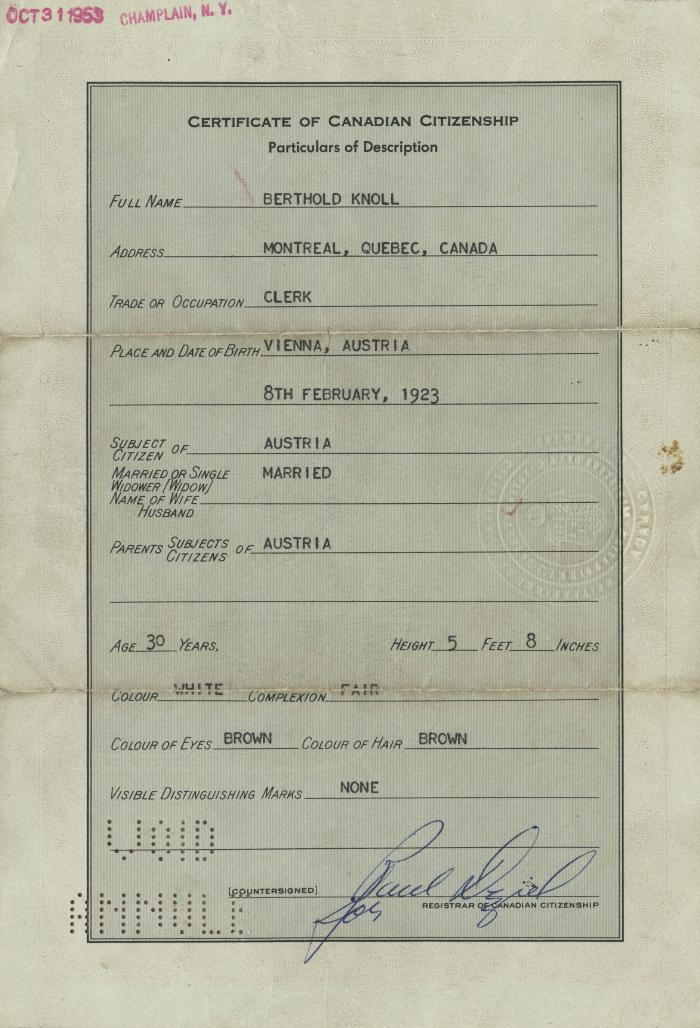 IdentifierRA029-02-00-02
Title NoteTitle taken from contents of file.
Extent & Medium13 documents
Date1930–2008
CreatorKnoll family
Administrative/Biographical HistoryBert Knoll (birth name Berthold Knoll, b. February 8, 1923, in Vienna, Austria) was an Austrian Jew from a family of Polish origin. He was born to Josef Knoll (b. May 11, 1897 in Stanisławów, Poland, now Ivano-Frankivs’k, Ukraine, d. November 19, 1938 in Vienna, Austria) and Regina (or Regine) Knoll (née Schmetterling, b. May 15, 1898 in Zaleszczyki, Poland, now Zalishchyky, Ukraine).

In the late 1990s, Bert and Molly moved to Ottawa to live closer to family. Bert spoke at schools, clubs and cultural organizations about his life experience in Vienna, his escape to England on a Kindertransport train and his life as an enemy alien in Canada. He was a committed philanthropist who donated to many charitable organizations. Bert Knoll died March 6, 2015, in Ottawa. Molly Knoll died June 27, 2007, in Ottawa. They are buried in the Mt. Pleasant Cemetery (Young Israel of Chomedey section) in Montée St-François, QC. Bert and Molly had two children, Joel and Jeff.
Scope & ContentFile contains public and private documents related to the life of Bert and Molly Knoll in Austria, Germany, England and Canada. Documents include Bert Knoll’s British certificate of registration, German passport, Austrian birth certificate, photocopies of passenger list and ship information for the S.S. Roussillon, a news article about the Ripples internment camp, Bert’s testimonies, Molly’s Canadian immigration identification card, Bert and Molly’s ketubah agreement and their certificates of Canadian citizenship.
LanguageCzech, English, Hebrew, German, French, Hungarian
System of ArrangementRecords in file are arranged in chronological order by the archivist.
RightsMaterials available for research and education purposes only. Permission to publish, copy or otherwise use these materials must be obtained from the VHEC.