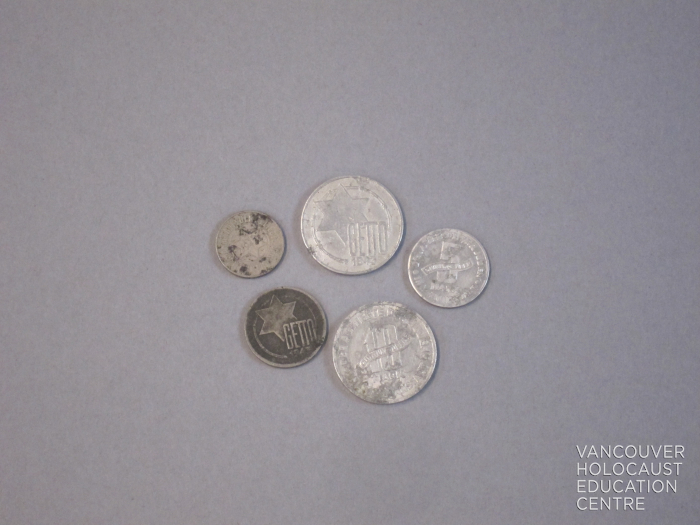 Alexander died March 9, 1998, in Vancouver. Saul died May 1, 2002 in Vancouver. Gina lives in Vancouver.
Scope & ContentSeries is comprised of currency issued in the Łódź ghetto in Poland: one 50 pfenning note and one 5 mark note issued in 1940, one 10 mark coin issued in 1942, four 10 mark coins and two 5 mark coins issued in 1943. Currency was purchased by Alexander Dimant in Warsaw after the war. Series also consists of two thimbles found by Alexander Dimant in the rubble of what was the Warsaw ghetto in 1947, and a pane of 20 32-cent US stamps commemorating Raoul Wallenberg.
Archival HistoryAccessions unknown, 2019.004
RightsMaterials available for research and education purposes only. Permission to publish, copy or otherwise use these materials must be obtained from the VHEC.

Alexander and Gina Dimant fonds (RA016)
Fonds is comprised of correspondence, photographs, identity and personal documents, society registration documents, minutes, clippings, memorabilia and ephemera created or collected by Alexander and Gina Dimant in Poland, the Union of Soviet Socialist Republics (USSR), Italy and Canada. Records pertain to their family history, work, school, and social and volunteer activities prior to and after the Second World War.