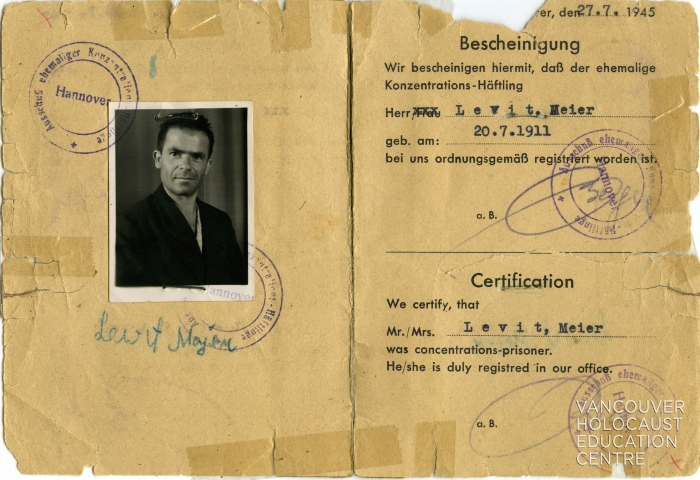 Mayer worked as a tailor in Kraków, and worked a year in Paris in 1937. In 1938, he returned to Kraków, and to Działoszyce when the war began. When the Germans began deporting Jews in his home community, he and one of his brothers were put on a train and assigned to a small labour camp near Kraków (possibly a satellite of Płaszów). His mother, unable to walk to the train station, was shot on the outskirts of Działoszyce along with many others.

Mayer and his brother were sent to Buchenwald and separated. His tallis and tefillin were taken from him. From Buchenwald he was transferred to the Mittelbau main camp, then to Bergen-Belsen. He was liberated when the British army arrived in the spring of 1945. At the time of his liberation he was given a prayer book and hand towel. None of his siblings survived the Holocaust.

Mayer lived as a displaced person at Bergen-Belsen and Hanover. In 1948 he received a visa to immigrate to Canada. On June 2, 1948, Mayer left Bremerhaven for Halifax, where his ship, the Ernie Pyle, was met by representatives of the Canadian Jewish Congress, who wanted him to proceed to Winnipeg. Instead, Mayer moved to Montreal, where he found work as a tailor.

Mayer married Eva Levit in 1949; the couple had one daughter, Bluma (Judy). In 1960, the family moved to Vancouver, where Mayer eventually opened a tailor shop. He was a member of Chabad Downtown Vancouver. In 1977, he provided testimony to Yad Vashem Martyrs’ and Heroes’ Remembrance Authority recording the names and birth and death dates of members of his family who were murdered in Poland during the Holocaust.

Eva Levit died in 1993. Mayer Levit died in April, 2000.
Scope & ContentThe records in this fonds pertain to the experience of Mayer Levit after his liberation from Bergen-Belsen. These include transit and identification documents, a prayer book, embroidered towel, ration card and official documents attesting to his status as prisoner and his subsequent application for compensation.
Archival HistoryAccession 2000.012
Immediate Source of Acquisition or TransferItems were in the possession of Mayer Levit until his death in April, 2000, after they were in the possession of his daughter, Judy. Judy Levit donated them to the VHEC in 2000.
AccrualsNo further accruals are expected.
LanguageGerman, English, Hebrew
System of ArrangementRecords are arranged in the order in which they were catalogued upon donation to the VHEC in 2000.
RightsMaterials available for research and education purposes only. Permission to publish, copy or otherwise use these materials must be obtained from the VHEC.
Rules or ConventionsISAD(G) informed by RAD
Archivist's NoteFonds arranged in 2019 based on legacy Filemaker Pro item-level descriptions.
Date of Description2019

Mayer Levit fonds (RA031)
The records in this fonds pertain to the experience of Mayer Levit after his liberation from Bergen-Belsen. These include transit and identification documents, a prayer book, embroidered towel, ration card and official documents attesting to his status as prisoner and his subsequent application for compensation.