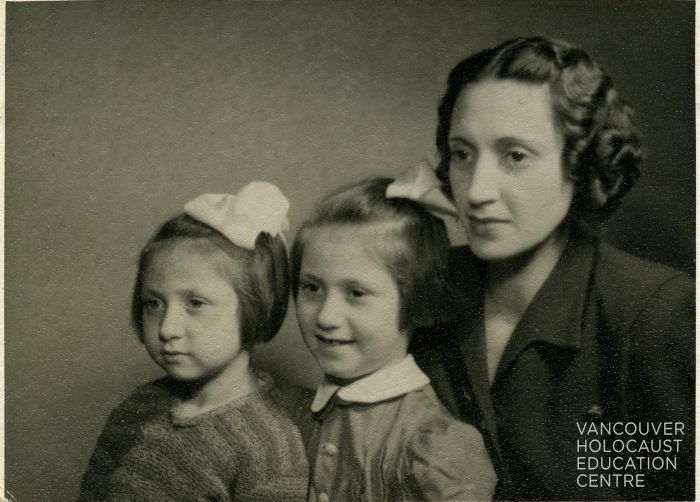 Erika died in 2005 of pulmonary disease. Eva died in 2018.
Scope & ContentCollection consists primarily of records generated or used during the period of the Second World War by the Vilcsek family in Budapest, Hungary. These include vital statistics and personal records of the Vilcsek family, photographs, and postcards mailed to the family from Ernő Vilcsek while he was in a labour camp in Hungary. Collection also consists of artworks, several on the theme of the Holocaust, created by Eva Kero after her immigration to Vancouver, BC.

Collection has been arranged into four series: Correspondence (1942), Family records ([after 1881]–1949), Artworks (1969–1971) and Photographs (1917–[before 1943]).
Archival HistoryAccessions 1993.013, 2008.003, 2010.001, 2019.039
Immediate Source of Acquisition or TransferRecords were in the custody of Erika Fleischer and Eva Kero, who donated them to the VHEC in three accessions. Erika Fleischer donated in 1993; Eva Kero donated once in 2008 and once in 2010. Photographs were in the custody of Eva Kero until her death in 2018, after which they were kept by the executor of her will, who donated them to the VHEC in 2019.
AccrualsNo further accruals are expected.
LanguageHungarian, German, English
System of ArrangementCollection has been arranged into series by the archivist; item-level descriptions based on legacy Filemaker Pro database entries. Donations from Erika Fleischer and Eva Kero were processed together.
RightsMaterials available for research and education purposes only. Permission to publish, copy or otherwise use these materials must be obtained from the VHEC.
Rules or ConventionsISAD(G) informed by RAD
Archivist's NoteArranged in April, 2019 by Shyla Seller. Revised May, 2019 with description of accrual.
Date of Description2019

Vilcsek family fonds (RA033)
Collection consists primarily of records generated or used during the period of the Second World War by the Vilcsek family in Budapest, Hungary. These include vital statistics and personal records of the Vilcsek family, photographs, and postcards mailed to the family from Ernő Vilcsek while he was in a labour camp in Hungary. Collection also consists of artworks, several on the theme of the Holocaust, created by Eva Kero after her immigration to Vancouver, BC.