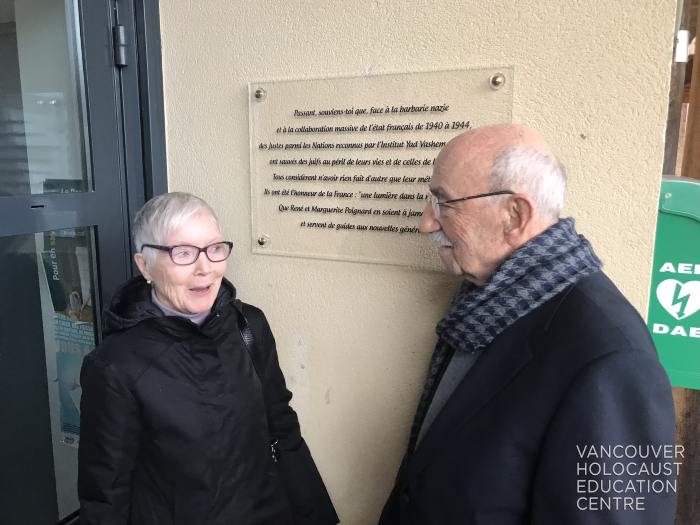 IdentifierRA035
Title NoteTitle based on the provenance of the records.
Extent & Medium7 documents
7 photographs : prints, b&w
5 photographs : JPGs, colour
9 photocopies
1 speech
Date1940–1946; 2018
CreatorVanry, Serge
Administrative/Biographical HistorySerge Vanry [Wajnryb] was born in Paris June 22, 1931, to parents Solomon [Salomon, Szlama] Wajnryb (b. March 23, 1898, Warsaw, Poland, d. October 19, 1968, Vancouver) and Suzanne [Sarah] Kouchelewicz/Kuszelewicz/Kouchelevitz Wajnryb (b. November 19, 1903, Lida, Lithuania, d. August 5, 1996, Vancouver). Serge’s younger brother Édouard, was born in 1939 in France and died 1944 in Auschwitz. Before the war, the Wajnryb family lived in the 17th arrondissement of Paris, and Solomon ran a leather goods business. Solomon and Suzanne had, respectively, Polish and Lithuanian citizenship, so though they lived in France for around twenty years, their French identity cards labelled them as Jewish foreigners. Serge and Édouard were French citizens and therefore had different papers from those of their parents.

In 1941, Solomon’s business was confiscated by state officials. Shortly afterwards, Solomon left Paris for unoccupied France, in Vichy, and connected with the resistance. He left money for Suzanne and their children, who remained in the family apartment. On July 16, 1942, during the Vel’ d’Hiv roundup, Serge recalls two French policemen coming to the door of the apartment; the family was told to pack up for relocation. Suzanne packed Serge a bag, took off his yellow star and told him to leave Paris for the home of the Poignard family, family friends and farmers in Neuvy-en-Sullias. René and Marguerite Poignard sheltered him for six months before an uncle on his mother’s side, Samuel Solnica, picked him up and smuggled him across the border to Vichy, where he briefly reunited with his father.

Serge and his father were warned not to remain together, to avoid compromising his father’s identity, as Solomon was using false papers. Serge stayed hidden in youth camps and houses arranged by the resistance. He and his father moved to the Italian occupied zone and were in Grenoble at the time of its liberation. At that time neither knew what had happened to the rest of their family. The two returned to Paris in order to search for Suzanne and Édouard. Serge remembers going to the Hotel Luticia shortly after arriving in Paris, and seeing crowds of survivors waving photographs of their loved ones, looking for lost family members.

Eventually Serge and his father found out that, three weeks before the liberation of Paris, Édouard had been rounded up with other children from an orphanage at Varenne Saint-Hilaire and taken to Drancy July 23, 1944, then deported to Auschwitz July 31, 1944, where he was murdered.

Suzanne was arrested July 16, 1942 and interned at Pithiviers, Drancy, and then Auschwitz. She was liberated at Ludwigslust May 5, 1945 and repatriated to Paris May 19, 1945. According to Serge, she was one of only two survivors out of 1,200 people in her convoy from Drancy to Auschwitz. Suzanne was reunited with Solomon and Serge a year after liberation. She received a deportee’s pension from the French government after the war. Serge recalls her being very sick and emaciated when they were finally reunited; she wasn’t the same person he remembered from before the war, and never told Serge about her experiences. Her sister, Léa Rosemblum (née Kouchelevitz), did not survive the war. The Vanrys were close with Solomon’s sister, Sonia (Sira) Borowka, her husband, Julius and their child, Eliane, who had moved from Poland to Paris before the war. The Borowkas were arrested in Paris and deported to Auschwitz, where they were killed. Their names appear in Le mémorial des enfants juifs déportés de France (Beate and Serge Klarsfeld, Paris, 1978).

In 1946, the Vanry family applied to emigrate to Canada, but were turned down. In early 1947, a cousin in Canada approached the Speaker of the House of Commons and personally appealed for help to get them to Canada. The family was permitted to enter Canada at the end of that year, when Serge was 16 years old. They moved to Vancouver and Serge went to King Edward High School. He connected with the French Club, learned English and graduated in 1949. After graduation he briefly attended UBC and worked with his father, who operated a leather goods store, Vanry Fine Leather Goods, on Granville Street.

In his early thirties, Serge returned to university. He graduated from dental school at the University of Manitoba at age 35, and subsequently ran a successful dental practice in Vancouver. Serge Vanry is past president of the College of Dental Surgeons, of the Vancouver and District Dental Society and was the first president of the BC Dental Association.

At the age of sixty, Serge Vanry met Dr. Robert Krell and came out as a hidden survivor. He joined the Vancouver Holocaust Education Centre’s hidden children group and has volunteered as a Holocaust survivor speaker. In 2018, Serge went with his family to Paris to participate in a ceremony honouring René and Marguerite Poignard, Righteous Among the Nations, for hiding him in 1942.
Scope & ContentFonds is comprised of photographs, certificates, identity and repatriation cards, correspondence and photocopies of administrative records. Records pertain to the experiences of the Vanry family during the Holocaust in France. Fonds also includes photographs and a speech created as a result of Serge Vanry’s participation in a ceremony honouring his rescuers, René and Marguerite Poignard of Neuvy-en-Sullias, held in France in 2018.

Fonds is arranged into the following two series: Family records ([1942 or 1943]–1945, 2018) and Photographs (1940–[circa 1945]; 2018).
Archival History1998.002; 2002.014; 2019.066
Immediate Source of Acquisition or TransferRecords were in the custody of Dr. Serge Vanry until their donation to the VHEC in three accessions.
AccrualsNo further accruals are expected.
LanguageFrench, English
NoteBiographical history prepared in part with information from Serge Vanry's memoir, "The Hidden Childhood," prepared in 2017 as part of the Langara College Writing Lives project. See also testimony video recording and case file.
System of ArrangementFonds is arranged into two series by the archivist. Accruals were processed together.
RightsMaterials available for research and education purposes only. Permission to publish, copy or otherwise use these materials must be obtained from the VHEC.
Rules or ConventionsISAD(G) informed by RAD
Date of Description2019

Dr. Serge Vanry fonds (RA035)
Fonds is comprised of photographs, certificates, identity and repatriation cards, correspondence and photocopies of administrative records. Records pertain to the experiences of the Vanry family during the Holocaust in France. Fonds also includes photographs and a speech created as a result of Serge Vanry’s participation in a ceremony honouring his rescuers, René and Marguerite Poignard of Neuvy-en-Sullias, held in France in 2018.