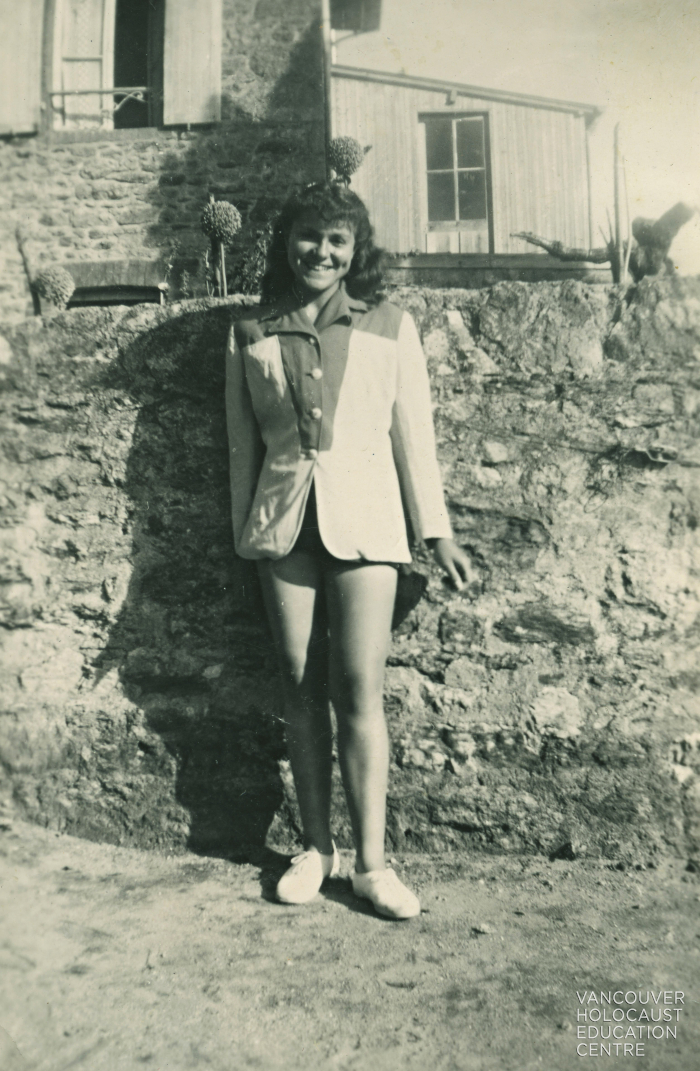 IdentifierRA003
Extent & Medium1 memoir
1 artefact
1 file textual records
4 electronic records (tifs)
Dateoriginally created [circa 1930]–1994; digitized 2016, 2019
CreatorJakoubovitch, Jannushka Elisheva
Administrative/Biographical HistoryJannushka Elisheva Jakoubovitch (b. June 20, 1933 in Paris, France, d. December 2019 in Vancouver) was a child survivor of the Holocaust from France. Born to Jewish parents—her father from Poland and her mother from France—she spent her early years in Paris before mounting political pressure forced her parents to send her and her brother to safe houses operated by the French resistance in the countryside. Her, her brother and parents survived the war isolated when one another, and lost everyone in their extended family.

After the war, the family had a difficult time reorienting to life together in Paris without their relatives. Jannushka left Paris at age 19 and travelled extensively, eventually working for the United Nations and other international non-governmental organizations. She came to Canada in 1967, married a United Nations employee in 1970 and had two children, a daughter in 1971 and a son in 1973. The family lived in Vienna and Rome, and then returned to Canada. Jannushka and her husband divorced in 1991 after living apart for many years, him in Vienna and her and her children in Victoria. In Victoria, she reconnected with her Jewish heritage, joined a synagogue, and began to speak openly about her childhood experiences. After her divorce she travelled to different cities in Canada and to Singapore. She settled in Vancouver and joined the Vancouver Holocaust Education Centre, where she was a dedicated outreach speaker and recognized for special contributions to Holocaust education and remembrance.
Scope & ContentThe fonds consists of Jakoubovitch’s yellow cloth star, her memoir, a typewritten manuscript detailing Jakoubovitch’s experience of the Holocaust, digital copies of family photographs, one photocopied newspaper clipping and one item of correspondence relating to the manuscript and the testimony recorded therein.

Fonds has been arranged into two files: 1. Memoir, testimony and associated materials; 2. Digitized photographs.
Archival HistoryAccession 1996.012; Accession 2016.007; Accession 2020.001
Immediate Source of Acquisition or TransferRecords were donated to the VHEC by Jannushka Elisheva Jakoubovitch in 1996, 2016 and 2019.
AccrualsAugust 31, 2016 accrual of digital copies of family photographs and photocopied articles: Accession 2016.007. Photocopies available in related survivor file. January 2020 accrual of records given by Jannushka to Donna Cantor, survivor services coordinator of the VHEC, in December 2019. No further accruals are expected.
LanguageEnglish
RightsDonor relinquished rights to materials in fonds upon their donation to the VHEC but the fonds contains third-party materials for which copyright was not transferred. Researchers are responsible for determining the appropriate use or reuse of materials.
Rules or ConventionsISAD(G), Rules for Archival Description
Archivist's NoteFinding Aid prepared by Myron Groover in July 2013 and updated in September 2016 and February 2020 by Shyla Seller.
Date of Description2013