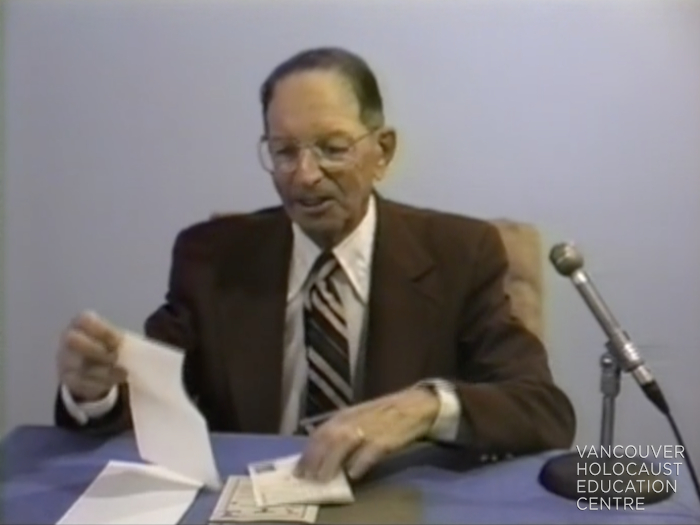 They settled in Vancouver, BC, where Paul and Max started a pottery business and their mother, Alice, worked for the Red Cross. In 1954, Paul returned to Cologne and visited the former location of his family’s lace business, on Apostelnstrasse II. The original building was damaged but the basement remained intact. Paul retrieved samples and other materials produced by M. Meyer & Co. in the basement and brought these materials back to Vancouver.

In 1874 Max Meyer established a successful lace business in Cologne, Germany, which eventually grew to 300 employees and moved to a new building, M. Meyer & Company in 1906. The business became a prosperous and well-known lace producer for the European fashion industry before being Aryanized during the late 1930s. The Meyer family left for Canada in September 1939 and never resumed their lace business.
Scope & ContentFonds consists of records pertaining to the life, military service and work of members of the Meyer family in Germany before 1939, records related to their attempts to leave Germany and personal objects used by Paul Meyer in Vancouver. Records include identity and transit documents, records related to taxes and fines, diaries, photographs, publications, personal items and correspondence. The fonds has been arranged by the archivist into the following five series:

Family records series (1875–1939), Correspondence series (1938–1939), Writings, publications and ephemera series (1915–1976), Photographs series ([1900-1901?]–[after 1980s?]) and Artefacts series ([19--]).
Archival HistoryAccessions: 1996.025, 2002.001, 1998.007, 1993.033 (Paul), 1996.015 (Max), 2011.004 (Huberman), 2015.005 (Jahnke). Physical storage is in numerical order of original item number assigned upon the donation of the artefact to the VHEC. In some cases, more than one item was assigned a single identifier and stored together. New unique item numbers were generated in 2019 in preparation for collection to be described in aggregate and ingested into the CMS.
Immediate Source of Acquisition or TransferTextual records, lace samples and photographs were in the custody of Paul or Max Meyer prior to their donation to the Vancouver Holocaust Education Centre. Embroidery was in the custody of Evelyn Huberman and donated to the VHEC in 2011. Leather bag and tuxedo were purchased by Claus Jahnke from the Paul Meyer estate and gifted to the VHEC in 2015.
AccrualsAccruals were processed together. No further accruals are expected.
LanguageGerman, English, French, Spanish
NoteSee also Meyer family survivor file.
System of ArrangementArrangement of the items into series provided by the archivist. Unless otherwise stated, items within each series have been arranged chronologically by the archivist according to the date of creation of the original item. Fonds has been described to the item level.
RightsMaterials available for research and education purposes only. Permission to publish, copy or otherwise use these materials must be obtained from the VHEC.
Rules or ConventionsISAAD(G) informed by RAD
Archivist's NoteArchival items described by Ally Bebbling and informed by information in original Filemaker Pro database records. Museum objects described by Caitlin Donaldson. Series arrangement and description by Shyla Seller.
Date of Description2019

Meyer family fonds (RA038)
Fonds consists of records pertaining to the life, military service and work of members of the Meyer family in Germany before 1939, records related to their attempts to leave Germany and personal objects used by Paul Meyer in Vancouver. Records include identity and transit documents, records related to taxes and fines, diaries, photographs, publications, personal items and correspondence. The fonds has been arranged by the archivist into the following five series: