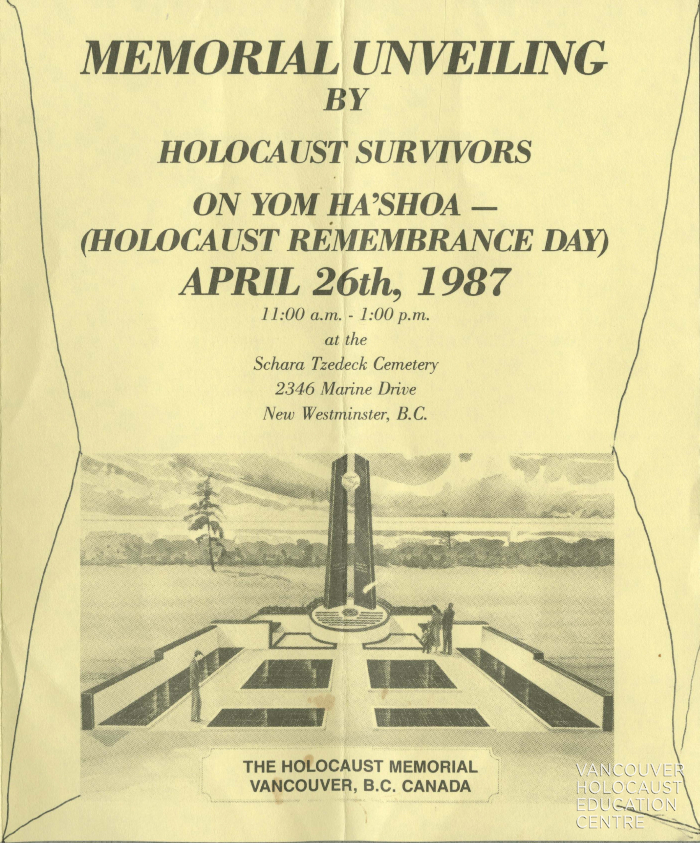 The committee presented a model of the proposed memorial at the April 9, 1986 annual general meeting of the VHCS, which authorized its construction at that time. Construction of the monument at the Schara Tzedeck Cemetery in New Westminster began in August 1986 and was completed in February 1987. It is inscribed with the following: “Dedicated to the six million of our beloved people brutally murdered during the Nazi Holocaust 1933–1945. They shall live in our hearts forever.”

The monument was unveiled on Yom HaShoah on April 26, 1987. It is the site of an annual High Holidays cemetery service first programmed by the Cemetery Service Committee of the VHCS, and later, by staff of the VHEC.

Key contributors to the Holocaust memorial were:
Naomi Spiers, artist
Jack Lutsky, architect
Ralph Schwartzman, structural engineer
Renia Perel, chairperson, names collection
Morris Perel, memorial assistance fund
Robert Krell, president, VHCS
Josef Auerhahn, funding eternal light
Jack Kowarsky, chairman, Holocaust Memorial Project and co-editor, commemorative book
Freda Kaplan, co-editor, commemorative book
Scope & ContentFonds is comprised of administrative and other records generated as a result of the activities of the Holocaust Memorial Committee of the VHCS. The Holocaust Memorial Committee managed the design and construction of a Holocaust memorial monument and an accompanying commemorative book project. The VHCS initiated and funded the committee’s work; its board members at the time of the memorial unveiling were Robert Krell, Leon Kahn, Dave Shafran, Freda Kaplan, Robbie Waisman, Leon Dales, Mariette Doduck, David Ehrlich, Lili Folk, Rome Fox, Paul Heller and Jack Kowarsky. Records in fonds include administrative files, inscription requests, correspondence, draft text of commemorative book, architectural drawings and photographs.
Archival HistoryFiles one through seven were originally in the possession of Freda Kaplan, board member of the Vancouver Holocaust Centre Society and member of its Holocaust Memorial Committee, and transferred to the archives in accession 1996.001 Kaplan. File 13 was stored with the VHEC’s institutional records and added to the fonds in 2019.
AccrualsNo further accruals are expected.
LanguageEnglish
NoteOne item in fonds is described. For more information about and access to materials in fonds described to the file level, contact the archivist.
System of ArrangementFiles 1 through 7 were arranged and described to the file level by the VHCS. Remaining files were added to the fonds in approximate chronological order by the archivist.
RightsMaterials available for research purposes only. Permission to publish, copy or otherwise use these materials must be obtained from the VHEC.
Rules or ConventionsISAD(G) informed by RAD
Archivist's NoteCreated in 2019 by Shyla Seller. Updated January 2020 with addition of DVD recording of unveiling event. Updated June 2020 with addition of VHS recording of unveiling event. Updated August 2020 with addition of architectural plans.
Date of Description2019