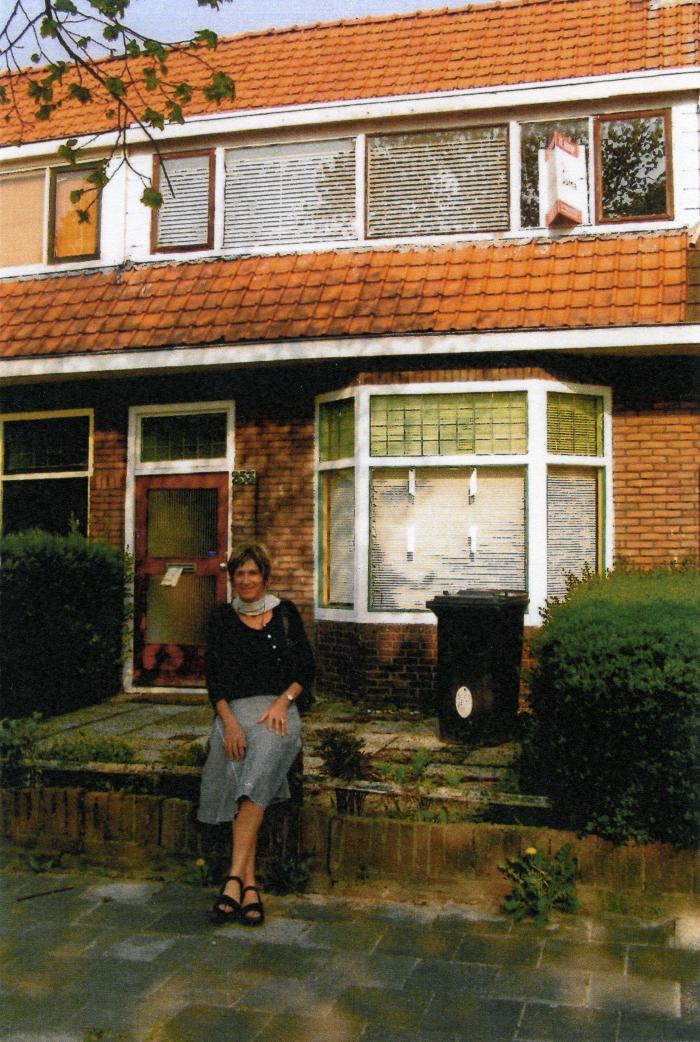 Amalia Boe-Fishman in front of the house she hid in during the Second World War, 1999.
Access Points
Survivors
Righteous Among the Nations
Hiding
Download

IdentifierRA041
Extent & Medium530.9 MB electronic records (.pdf, .txt, .rtf, .doc, .jpg, .htm, .pages) 17 photographs : black and white, colour 1 album : 26 pages
Date1930–2018
CreatorBoe-Fishman, Amalia
Administrative/Biographical HistoryAmalia Boe-Fishman was born in Leeuwarden, the Netherlands, in 1939 to Johanna (née de Leeuw) (1908–1992) and Arnold van Kreveld (1909–1992). The van Kreveld family were a secular Jewish family well integrated into life in the province of Friesland in the Netherlands prior to the Second World War. Amalia survived the Holocaust in hiding at the home of a colleague of her father’s named Jan Spiekhout, a member of the Dutch resistance. Amalia’s parents and older brother (David, born 1937) were separated and the family hid in different places during the war. A second brother (Jan, named after Jan Spiekhout) was born during the war, in November 1944. After the war, the family rented a house on the same street in Leeuwarden where they had lived before the war. Amalia attended summer camp hosted by the Humanistich Verbond Ethical Society in 1947. She remained close to the Spiekhouts throughout her life.

Amalia met her ex-husband, a Canadian Jew, while in Israel at age 21; they moved to Canada in 1962 after marrying in Holland that same year. The couple had three children. They divorced in 1983. Amalia remarried in 1994 to Kristen Boe.

In 1999, Amalia visited the Netherlands and her foster brother, Simon Spiekhout, who was her baby brother while she lived in hiding. Jan Spiekhout and his parents, Durk and Froukje Spiekhout, were recognized as Righteous Among the Nations by Yad Vashem’s Holocaust Martyrs’ and Heroes’ Remembrance Authority in 2008 for their role in sheltering Amalia during the war. Amalia and her children attended the ceremony honouring the Spiekhouts in The Hague in 2009.

Amalia lives in Vancouver and is an active Holocaust survivor speaker.
Scope & ContentFonds consists of documentation supporting Amalia Boe Fishman’s application to Yad Vashem’s Holocaust Martyrs’ and Heroes’ Remembrance Authority to have Fishman’s foster family, the Spiekhouts, recognized as Righteous Among the Nations, and one letter and photographs belonging to the van Kreveld family of Leeuwarden, the Netherlands. Fonds is arranged into three series: Correspondence, Spiekhout album (1942–2009), Family photographs (1930–1999) and My War Story website documents (2007–2018).
Archival HistoryAccession 2019.099. Digital documents donated in 2020 were processed as part of the 2019.099 accession.
Immediate Source of Acquisition or TransferMaterials were in the custody of Amalia Boe-Fishman prior to being donated to the VHEC in 2019. Amalia’s son, Ben Fishman, provided access to the family’s digital documentation in support of the Yad Vashem application to the VHEC in January 2020.
AccrualsFurther accruals are not expected.
LanguageDutch, English
System of ArrangementRecords are arranged into series by the archivist based on groupings established by the creator.
RightsDonor relinquished rights to materials in fonds upon their donation to the VHEC but the fonds contains third-party materials for which copyright was not transferred. Researchers are responsible for determining the appropriate use or reuse of materials.
Rules or ConventionsISAD(G) informed by Rules for Archival Description
Archivist's NoteCreated January 2020 by Shyla Seller with assistance from Amalia Boe-Fishman.
Date of Description2020