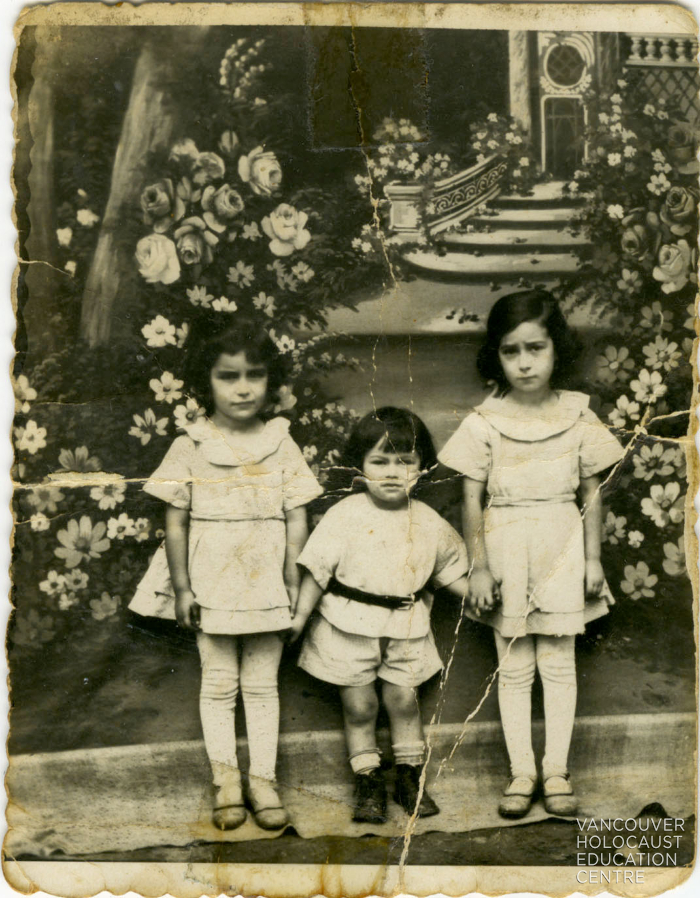 IdentifierRA045
Title NoteTitle based on subject of collection
Extent & Medium13 photographs : prints, black and white
Date[192-]–[before 1942]
collectorFidelman, Shoshana
Administrative/Biographical HistoryShoshana Fidelman (b. 1933, d. 2022) was born in Poland to parents Shlomo Dov Ejnesman (b. circa 1908, d. 1944) and Rakhel (Rukla, Rivka, Rozia) Kornwaser (b. circa 1908, d. 1945). Shlomo, a leather-goods dealer, and Rakhel were cousins. They were married in 1929, and had three children: daughters Lea (b. 1931, d. 1944) and Shoshana, and a son, Noakh Khaim (b. 1935, d. 1944). Shlomo was one of seven children, and Rakhel was one of eight children. The family lived in Starachowice, Poland, then the Wierzbnik ghetto, where they were forced to move in 1939. The Wierzbnik ghetto was liquidated on October 27, 1942. The night prior to the liquidation, Shoshana and her family moved from the ghetto to the Starachowice factory slave labour camp where her father was on the Jewish camp council.

Just prior to the camp’s evacuation in July 1944, a group of camp internees planned and executed a mass escape attempt. Shlomo managed to escape but was later killed, likely in a nearby forest. Shoshana’s two siblings, Lea and Noakh Khaim, were killed during the attempt. Shoshana recalls that she and her mother saw the body of her brother and likely the body of her sister as they were being evacuated from the slave labour camp and put on a train destined for Auschwitz-Birkenau. In Auschwitz-Birkenau, she and her mother received numbered tattoos. After Auschwitz was liberated, Shoshana and her mother returned by train to Starachowice-Wierzbnik to search for relatives but the only person who came back was her uncle, Noah Ejnesman, who returned at around the same time as them.

The Jewish survivors who returned congregated together in a few homes in Starachowice-Wierzbnik. On June 19, 1945, Shoshana and her mother were in a home with Sara Wolfowich and her two sons, when three Poles entered the home and shot Rakhel and the Wolfowiches. Shoshana was shot in the pogrom but survived. Her uncle Noah took her to the hospital and, the next day, he was also murdered by Polish anti-Semites. A total of eleven Jews from Wierzbnik, Wąchock and Bodzentyn were killed by Poles after they returned to Poland at the end of the war. After two months in the hospital, Shoshana was taken to a farm in the countryside to recover, where a distant relative came to get her, and put her in an orphanage in Łódź.

Shoshana Fidelman worked as a nurse. She immigrated to Canada in 1967 with her husband, Moshe, and their two daughters. They lived in Lethbridge and Calgary, and later moved to White Rock and Surrey.

Shoshana Fidelman removed her tattooed number in 1987, after people in Canada kept asking her why she had her phone number on her arm. In 2008 she gave an interview about her experiences to Holocaust historian Christopher R. Browning. Shoshana Fidelman lived in Surrey, BC.
Scope & ContentCollection is comprised of original photographs and photo postcards of Shoshana Fidelman’s grandparents, parents, uncles and aunts and siblings, none of whom survived the Holocaust. Photographs were taken in Poland prior to the Second World War and mailed by Shoshana Fidelman’s family living in Starachowice-Wierzbnik and Bodzentyn to family members in Canada and Israel.
Archival HistoryAccession 2020.012. Ten photographs of the donor’s father’s side of the family were given to Shoshana Fidelman in the 1970s by an aunt living in Edmonton, who had received them by mail from the Ejnesmans. Three photographs of her mother’s side of the family were in the possession of an aunt living in Israel.
Immediate Source of Acquisition or TransferPhotographs were donated to the VHEC by Shoshana Fidelman in March, 2020.
AccrualsAccruals are not expected.
LanguageEnglish, Yiddish
NoteName spellings taken from pages of testimony provided by the donor to Yad Vashem. Donor interview recorded Monday, March 2, 2020. See donor file for photographs of a page and cover of a 1973 memorial book about the Starachowice-Wierzbnik community which records the names of the eleven Jewish people killed by Poles after the war.
System of ArrangementPhotographs arranged in the order in which the donor presented them to the archivist in a meeting on March 2, 2020.
RightsMaterials available for research and education purposes only. Permission to publish, copy or otherwise use these materials must be obtained from the VHEC.
Rules or ConventionsISAD(G) and Rules for Archival Description
Archivist's NoteDescription created by Shyla Seller in March, 2020.
Date of Description2020

Ejnesman, Kornwaser family photograph collection (RA045)
Collection is comprised of original photographs and photo postcards of Shoshana Fidelman’s grandparents, parents, uncles and aunts and siblings, none of whom survived the Holocaust. Photographs were taken in Poland prior to the Second World War and mailed by Shoshana Fidelman’s family living in Starachowice-Wierzbnik and Bodzentyn to family members in Canada and Israel.