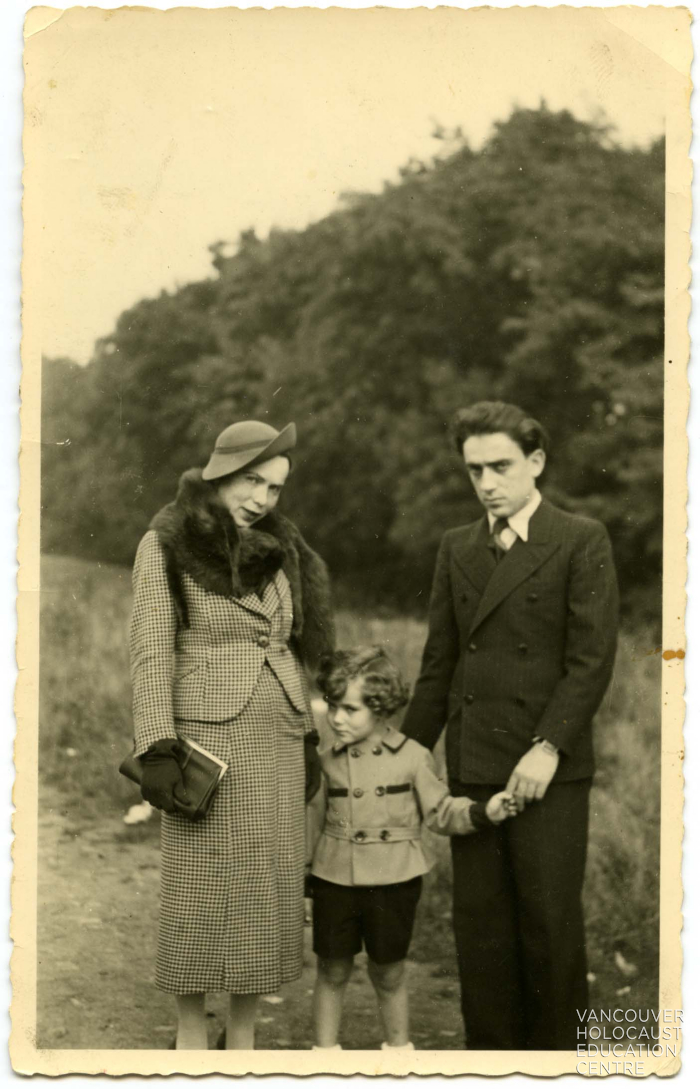 IdentifierRA046
Title NoteTitle based on provenance of fonds.
Extent & Medium24 documents
1 photograph album : 23 x 32 cm (82 photographs : black and white)
Date1917–1965
CreatorGoldman, René
Administrative/Biographical HistoryRené Goldman was born on March 25, 1934 in Luxembourg, Luxembourg to Wolf Goldman (b. May 9, 1911 in Wieruszów, Poland, d. January 1945) and Mirel (Mira) Shaindl Goldman (neé Arensztein, b. April 17, 1907 in Kalisz, Poland, d. after September 1942 in Auschwitz, Poland). Wolf and Mirel Goldman lived in Poland until around 1930, then moved to France and Luxembourg, where they were married in October 1931.

In 1953, René moved to Beijing to study Chinese language, literature and history. He left China in 1958, returned briefly to Poland, then moved to France. In October 1960, he moved to the United States to pursue a graduate degree in the Department of History at the Weatherhead East Asian Institute at Columbia University in New York. René Goldman moved to Vancouver in 1963, where he completed his post-graduate studies and taught Chinese history at the University of British Columbia until his retirement.

René Goldman lives in Summerland, British Columbia, Canada, with his wife Terry Dekur. He is associate professor emeritus in the Department of Asian Studies at the University of British Columbia.
Scope & ContentThe records in this fonds pertain mostly to René Goldman and his parents, Wolf and Mira Goldman from Poland, Luxembourg and France. Fonds consists of family photographs, travel and identity documents, disappearance reports, certificates and post-war school records from orphanages resided in by René Goldman. Records have been arranged into the following two series: Goldman family photographs series (1917–[195-?]) and Goldman family records series (1929–1965).
Archival HistoryAccession: 2018.037
Immediate Source of Acquisition or TransferRené Goldman donated the records in this fonds to the VHEC in 2018.
AccrualsAccruals are not expected.
LanguageEnglish, French, Polish, Yiddish, Hebrew, German
System of ArrangementCollection has been arranged into two series by the archivist.
RightsDonor relinquished rights to materials in fonds upon their donation to the VHEC but the fonds contains third-party materials for which copyright was not transferred. Researchers are responsible for determining the appropriate use or reuse of materials.
Rules or ConventionsRules for Archival Description and ISAD(G).
Archivist's NoteFinding aid prepared by Lorenzo Camerini and Shyla Seller with assistance from René Goldman, 2020.
Date of Description2020