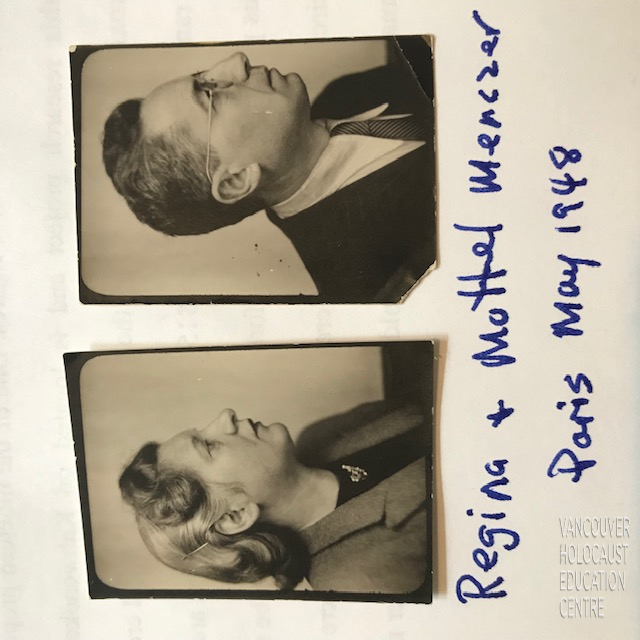 IdentifierRA047
Extent & Medium2 cm of textual records
Date1944–[1959]
CreatorMenczer, Mottel E.
Administrative/Biographical HistoryMottel Elieser Menczer was born February 7, 1901 in Gura Humorului, Romania, to Mechel and Sheve (née Körner) Menczer; the family lived in Storozhinets, in the region of Bukovina. He was the youngest of four siblings: a sister, Perl Spiegel, was killed by Nazis in Vienna in 1942, and a sister, Esther, and brother, Simon, emigrated to Israel in the 1930s and lived in Haifa.

After the First World War, Mottel E. Menczer went to Vienna to study at the Wiener Handelsakademie (Vienna Academy of Commerce). Upon completion of his studies, he returned to Storozhinets, where he operated a woolens and dry goods store and was active in Jewish affairs and community life. On August 18, 1935, he and Regina (Reghina) Dermer were married.

In 1940, Storozhinets was occupied by Russian forces, which controlled the region until the spring of 1941, after which the Nazis seized control over the town and forced Jewish families, including Mottel and Regina Menczer, into a ghetto. The Menczers were deported from the Storozhinets ghetto to Transnistria in the fall of 1941, first by railway cattle cars and later by walking, for five weeks, after which they were interned in the Bershad ghetto. Many members of the Storozhinets’ Jewish community, including the Menczers’ close family and friends, died on this journey, or in camps and ghettos in Transnistria, from exhaustion, hunger and illness, and at the hand of the Nazis.

In the spring of 1944, the Nazis retreated and the Menczers left Bershad. Mottel Menczer briefly taught in an elementary school for child evacuees in Rădăuţi before moving to Bucharest. In 1948, the Menczers were temporary residents of Paris and applied to immigrate to Canada. They arrived in Canada in January, 1949 and took up residence in Ottawa, where Mottel Menczer worked as a retail salesman and Regina worked as a bookkeeper. They had one child, Micha Jacob Menczer, born November 8, 1950.

Mottel E. Menczer contributed material on the Holocaust period and concentration camp life to publications like the Ottawa Citizen and the chapter on Berschad in Geschichte der Juden in der Bukowina, edited by Dr. Hugo Gold (https://www.jewishgen.org/yizkor/Bukowinabook/buk2_073.html).

Mottel E. Menczer passed away in his home in Ottawa on December 23, 1959.
Scope & ContentFonds is comprised of personal documents, correspondence, ephemera and stories written and/or used by Holocaust survivor Mottel E. Menczer during and after the Second World War. Fonds is arranged into three series: Travel, identification documents and ephemera (1944–1948), Writings [195-] and Correspondence [1952].
Archival HistorySome records in fonds were maintained by Mottel E. Menczer until his death in 1959, then by Regina Menczer until her death in 1982, after which they were kept by their son, Micha Menczer. Some stories were given to Micha from his cousin, Dora Steininger, daughter of Perl Speigel.
Immediate Source of Acquisition or TransferMicha Menczer donated the records in this fonds to the VHEC in a single accession in 2002.
AccrualsFurther accruals are possible.
LanguageYiddish, French, Russian, Romanian, English, German
System of ArrangementFonds is arranged into three series by the archivist.
RightsMaterials available for research and education purposes only. Permission to publish, copy or otherwise use these materials must be obtained from the copyright holder.
Rules or ConventionsISAD(G), Rules for Archival Description
Archivist's NoteFinding aid prepared in May 2020 by Shyla Seller, with information from Filemaker Pro records created in 2002.
Date of Description2020
Existence and Location of CopiesMicha Menczer, My Father's Stories, part of the University of Victoria's Stories of the Holocaust: Local Memory and Transmission project.