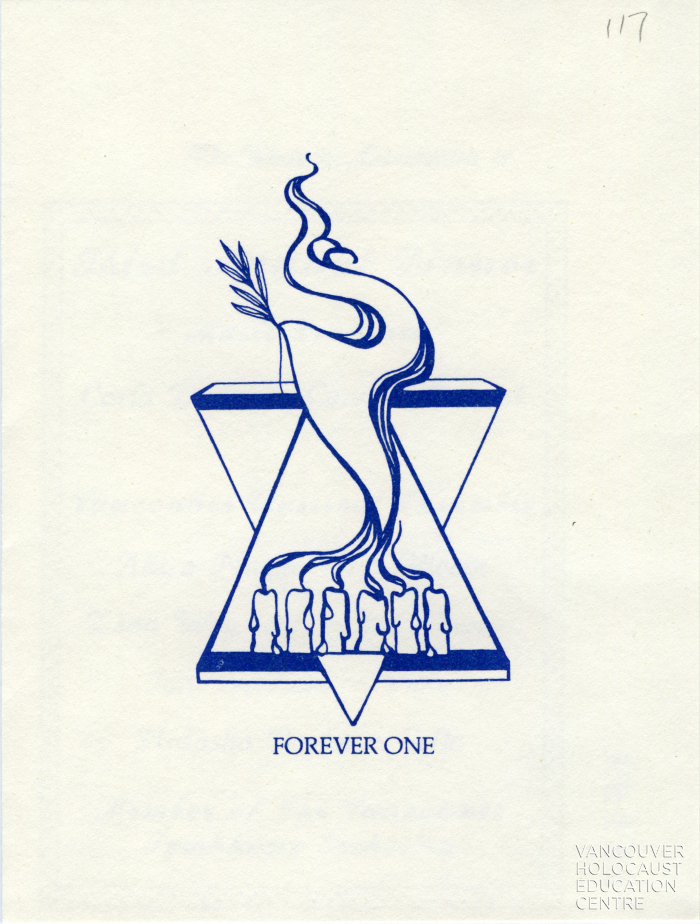 IdentifierRA049
Title NoteTitle of fonds based on provenance of records.
Extent & Medium13.75 cm of textual records 1 PDF : 39.4 MB 4 photographs : prints
Date1930–2020, predominant 1987–1994
CreatorKarsai, Helen
Administrative/Biographical HistoryDr. Helen Karsai was born in 1948 in Žilina, Slovakia, to parents Klara Kulka and Kornel Wertheim (later Vigor). Her grandfather, Leon Wertheim, was a leader in the city’s Maccabi movement and participated in the Maccabiah Games. Leon and his wife, Helena Wertheim, were deported to Auschwitz in 1944, where they were murdered. Karsai’s parents did not talk to her about what happened to her grandparents during the Holocaust.

Karsai immigrated to Canada with her mother in 1968. She obtained her MD from the University of Toronto in 1972, married and had two sons. The family moved to Vancouver in 1980, where Karsai worked as a clinical associate in medical oncology at the BC Cancer Agency until her retirement in 2015. In 1986, Karsai met Rudolf Vrba in the Czechoslovakia pavilion during Vancouver’s Expo 86; Vrba encouraged her to learn more about the events of the Holocaust. She did, and as a result, became active in Holocaust-related cultural, remembrance and educational activities in Vancouver. Karsai volunteered as a docent for the Danzig 1939: Treasures of a Destroyed Community exhibition at the Vancouver Museum in 1989. She was a member of the Second Generation Group and the Canadian Jewish Congress’s Standing Committee on the Holocaust and organized Kristallnacht and Yom HaShoah commemorative events as part of that committee. She taught the subject of the Holocaust to groups of students at Temple Shalom, participants embarking on the March of the Living, and at her son’s high school in Point Grey.

With Renia Perel, Karsai co-founded and co-chaired a group entitled the Western Association of Holocaust Survivor Families and Friends, active from 1989 to 1993. Members of this group included Frances Belzberg, Stanley A. Schwartz, Michel Mielnicki, Sala Zimmerman and others. With this association, Karsai participated in the organization of a Holocaust Awareness Day interfaith symposium at UBC (for an adult audience) in 1989, banquet dinners, movie nights and other social, cultural and educational activities.
Scope & ContentFonds is comprised of records generated as a result of Dr. Helen Karsai’s volunteer activity in Vancouver, BC, organizing and participating in Holocaust-based social, educational and cultural events, and teaching the context and events of the Holocaust. Fonds has been arranged into the following seven series: Western Association of Holocaust Survivor Families and Friends records ([circa 1989–1992], 2020), Teaching materials ([199-]), March of the Living project file (1992–1993), Danzig exhibition docent records (1989), Second Generation Group file (1987–1992), BC Cancer Agency multicultural committee file (1991–1992) and Vancouver Holocaust Centre Society records (1988–1993).
Archival HistoryAccession: 2020.026 Karsai
Immediate Source of Acquisition or TransferRecords in fonds were donated to the VHEC by Dr. Helen Karsai in 2020.
AccrualsNo accruals are expected.
LanguageEnglish
NoteThe majority of items in fonds are not described to the item level and are not available in digital form. For access, please contact the archivist.
System of ArrangementArrangement provided by the archivist based on groupings established by the creator.
RightsDonor relinquished rights to materials in fonds upon their donation to the VHEC but fonds contains third-party materials for which copyright was not transferred. Researchers are responsible for determining the appropriate use or reuse of materials.
Rules or ConventionsRules for Archival Description, ISAD(G)
Archivist's NoteFinding aid prepared by Shyla Seller in August 2020 in consultation with donor.
Date of Description2020