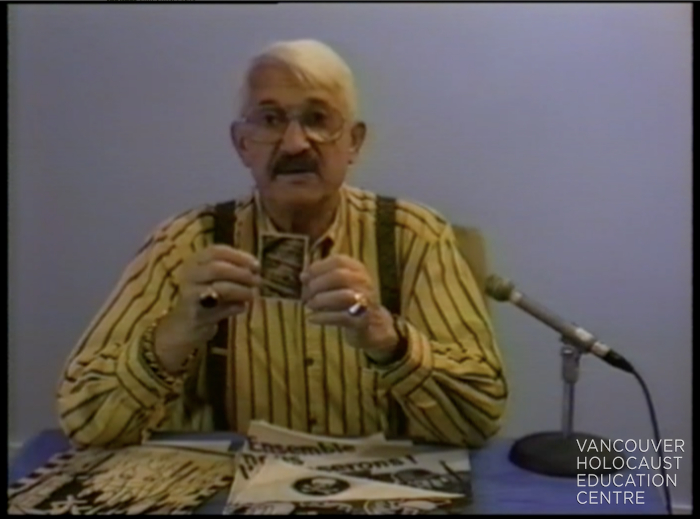 IdentifierRA056
Extent & Medium14 cm of textual records 40 photographs 3 artefacts 1 drawing 1 poster 26 audio cassettes
Date[1939–2005]
CreatorMielnicki, Michel
Administrative/Biographical HistoryMichel (Mendel, Misha) Mielnicki was born in Wasilków, a suburb of Białystok, Poland on March 20, 1927 to parents Chaim (b. 1895 Russia, d. 1942 Birkenau) and Ester (Esther, née Kulecka, b. 1903 Michałowo, d. 1942 Birkenau). He was the youngest of three siblings, with an older brother, Aleksei (Aron) and a sister, Lenka. Mielnicki studied at the Jewish high school in Białystok and was president of the student photography club. He spoke Yiddish, Russian, Polish and German.

In June 1939, after the German invasion, the Mielnicki family fled from Baiłystok to Zabłudów, where Michel’s mother’s brother and sister lived. The family eventually returned and were forced into the ghetto in Białystok for one year. They were transferred to the Prużana ghetto and lived there for just over a year. In 1941, the family was arrested and taken to Auschwitz-Birkenau; Mielnicki’s parents died shortly after their arrival. Mielnicki and his siblings were selected for labour and separated; Mielnicki worked at Auschwitz III-Monowitz, also known as Buna.

From 1943 to 1944, Michel laboured as an electrician in the IG Farben Buneverke rubber and synthetic methanol plant. He was transferred to Mittelbau (Dora), near Nordhausen, and worked in an underground factory producing rockets. In March 1945, Michel was transferred from Mittelbau to Bergen-Belsen. He was liberated from Bergen-Belsen on April 15, 1945. After liberation, Mielnicki found his sister Lenka in Czechoslovakia; they were unable to find their brother. He and Lenka survived with the help of the Haganah and moved to Paris together in 1945.

In Paris, Mielnicki apprenticed in the fashion industry; he married Fredericka (June) Frischer, who had also survived the Holocaust, in 1949. The couple had two children: Alain and Vivian. The Mielnickis moved to Canada in 1953. They settled in Montreal, where Michel worked as a fur designer, and in 1966, moved to Vancouver. In Vancouver, Mielnicki worked in the fashion industry and later, in real estate.

In June 1991, in Duisburg, Germany, Mielnicki testified at the trial of an SS officer, Heinrich Johannes Kuhnemann, Unterscharfuhrer, who had selected Mielnicki's parents for death at Auschwitz II-Birkenau. Mielnicki had witnessed Kuhnemann killing a friend of his. With the help of the German prosecutor at this trial, Mielnicki located his brother, Aleksei Mielnicki, who was living in Ivano-Frankivs'k, Ukraine. The brothers reunited in 1992.

Mielnicki volunteered with several organizations, including the VHEC, where he served as an outreach speaker and board member. In 2000, he put out a biography, as told to John A. Munro, co-published by Ronsdale Press and the Vancouver Holocaust Education Centre. He died in 2016.
Scope & ContentFonds consists of records created by, accumulated by, or about Michel Mielnicki related to his experience as a survivor of the Holocaust, the publication of Bialystok to Birkenau: The Holocaust Journey of Michel Mielnicki and Mielnicki’s reunion with his brother after nearly fifty years of separation. Records include photographs, newspaper clippings, correspondence, ephemera, video and audio cassette tapes, identity documents, notes and research materials.
Fonds is arranged into the following eight series: —Identity documents (1945–1966) —Photographs ([ca. 1939–1996]) —Memorabilia ([194–198-?]) —Mielnicki correspondence (1954–2005) —Clippings and publications (1947–2000) —Notes, research and speech ([198-]–[6 Oct. 1992]) —Leon Mendelewicz documents ([198-]–5 Mar. 1989) —Audio records (1995)
Archival History1993.035 Mielnicki, 1994.014 Mielnicki, 1996.004 Mielnicki, 1997.011 Munro, 2002.013 Mielnicki, 2020.025 Claman
Immediate Source of Acquisition or TransferRecords in fonds were donated to the VHCS and VHEC in several accessions by Michel Mielnicki. In 1997, John A. Munro donated cassette recordings of his audio interview with Mielnicki. Mielnicki’s daughter, Vivian Claman, donated materials in 2020.
AccrualsNo further accruals are expected.
LanguageRussian, English, Yiddish, French
NoteAccessions note: Mielnicki donated copy photographs of originals taken by the British Army at Bergen-Belsen and available from the Imperial War Museum: items 96.004.004, 96.004.005, 96.004.006, 96.004.007, 96.004.008, 96.004.009. Copies deaccessioned and destroyed in July 2020. Mielnicki donated two VHS video cassettes containing an unlicensed recording of a German-language documentary Der Prozess: Eine Darstellung des Majdanek-Verfahrens in Düsseldorf von Eberhard Fechner (1984): #176 VT, #177 VT. Legacy catalogue records from FileMaker Pro enhanced and ingested with funding from Library & Archives Canada Documentary Heritage Communities Program.
System of ArrangementArrangement provided by the archivist. Records donated in multiple accessions were processed together.
RightsRights assigned to the VHCS for preservation, display, publication, research and publicity in deeds of gift on file. Fonds contains third-party materials for which copyright was not transferred. Researchers are responsible for determining the copyright status and appropriate use or reuse of materials.
Rules or ConventionsISAD(G) informed by RAD
Archivist's NoteArranged and described in the spring and summer of 2021 by Shyla Seller and Chase Nelson. Biographical sketch drafted by Lorenzo Camerini. Item-level descriptions based in part on legacy Filemaker Pro catalogue entries.
Date of Description2021