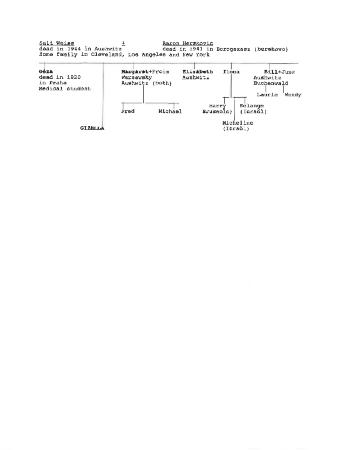 IdentifierRA061
Extent & Medium5 documents 27 photographs
Date[1922?–1946]
CreatorReisman family
Administrative/Biographical HistoryDavid Reed (née Reisman) was born in Brussels, Belgium, in 1942, to Samuel Reisman (b. 29 June 1903, Selvius, Hungary) and Gizella (née Herskovic) Reisman (b. 1911, Czechoslovakia). He had an older sister, Evelyn, born 1938. The family lived in Brussels at the onset of the Second World War, and had relatives in Beregszász, near the border of Hungary and Ukraine.

David Reed was placed in hiding in early 1943; his father, Samuel, was involved with the Belgian resistance, which he joined in 1942. David Reed was housed with other Jewish children and children of members of the resistance.

On April 3, 1943, Samuel Reisman was captured and sent to Breendonck in Belgium and then to Buchenwald in Germany, where he was imprisoned as a political prisoner and worked as an interpreter, which allowed him some freedom of movement. He helped move children in Buchenwald to the political prisoners camp, where they would be better fed. Reisman was saved from execution by an SS officer who helped him to hide in a salt mine after he was sentenced to death for his role in helping move the Jewish children. Later, Reisman travelled to Nuremberg to testify in that officer’s defense. Samuel Reisman received military honours from the Belgian government for his service as a resistant.

In October 1960, David Reed emigrated to the United States. He moved to Canada in 1974, and moved to Vancouver in 1991, where he worked as a freelance professor.
Scope & ContentFonds is comprised of photographs and correspondence pertaining to the Reisman family and their relatives, some of whom survived the Holocaust in Hungary and Belgium.
Archival HistoryAccession 1996.064
Immediate Source of Acquisition or TransferItems in fonds were aquired from David Reed in 1996. David Reed obtained the items from his mother, Gizella Reisman, whose parents were murdered in the Holocaust.
AccrualsNo further accruals are expected.
LanguageHungarian, German
NoteFinding aid created with the assistance of Library and Archives Canada's Documentary Heritage Communities Program.
RightsRights to materials in fonds were transferred by the donor to the VHEC in a deed of gift signed in 1996.
Archivist's NoteCreated in 2022 by Shyla Seller
Date of Description2022