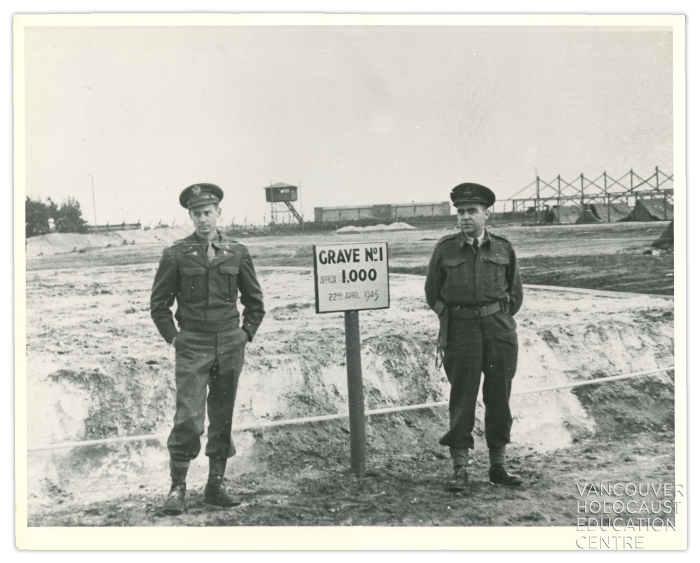 IdentifierRA066
Title NoteTitle based on contents of collection.
Extent & Medium13 photographs : prints
Date1945
Date NoteDate based on date of creation of original prints. Date of copy prints is unknown.
collectorKrell, Robert
ownerMcCreary, John Ferguson
Administrative/Biographical HistoryJohn F. McCreary (b. 1910 in Eganville, Ontario, d. October 14, 1979 in Gibsons, British Columbia) was a pediatrician and nutritional consultant with the Royal Canadian Air Force (RCAF). McReary, Hugh Branion, Sauve and McRae were part of a team assigned by the Supreme Headquarters Allied Expeditionary Force to assess the nutritional status of the people of the Netherlands (many of whom were starving) at the end of the Second World War, and to make recommendations about how restore their health. For his service, McCreary was recognized as an officer of the Royal Orange Order of Nassau by the Netherlands.

In 1951, McCreary joined the University of British Columbia as Professor and Head of the Department of Paediatrics and was Paediatrician-in-Chief of the Vancouver General Hospital's Health Centre for Children. In 1959 he became Dean of the Faculty of Medicine, a position he held until 1972.
Scope & ContentCollection consists of 13 black-and-white copies of photographs collected by John F. McCreary related to his visit to the Bergen Belsen concentration camp after its liberation. Photographs document the aftermath of atrocities and clean-up efforts organized by liberating soldiers.
Archival HistoryJohn F. McCreary and Robert Krell met at UBC when McCreary was Dean of Medicine. McCreary showed Krell an album of photographs from while he was stationed in Holland, on a visit to Bergen Belsen. Krell asked if he could have copies of the photographs, and McCreary agreed.
Immediate Source of Acquisition or TransferDonated to the VHEC by Robert Krell in 1998. Accession 1998.006.
AccrualsNo further accruals are expected.
NotePossible that two of the photos are not from Bergen Belsen.
System of ArrangementPhotographs arranged in numerical order of original unique identifiers assigned at the time of donation.
RightsPhotographs likely taken by a Royal Canadian Air Force photographer
Rules or ConventionsISAD(G) informed by Rules for Archival Description
Archivist's NoteDescription created in 2022 by Michaela Sawyer based on Filemaker Pro catalogue records created at the time of the donation of these photographs. Supported by funding from Library and Archives Canada Documentary Heritage Communities Program.
Date of Description2022