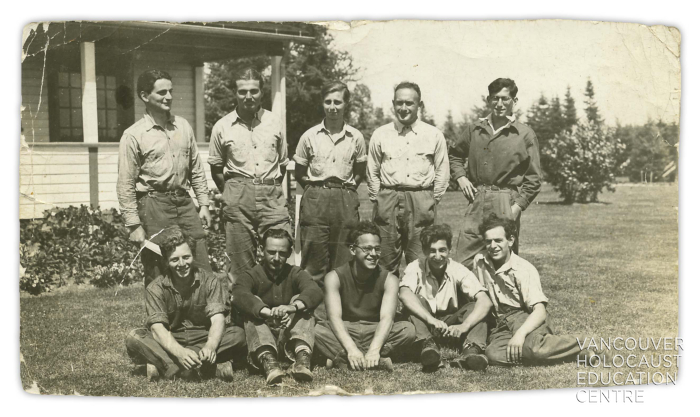 IdentifierRA070
Extent & Medium51 documents
8 photographs : prints
Date1931-2009
CreatorBardeleben, Gunter
Administrative/Biographical HistoryGunter Bardeleben was born in 1920 in Berlin, Germany. He attended the International Quaker School Eerde in Holland. As the situation for Jews in Nazi Germany worsened, Gunter’s parents were lucky. Because his father was a chemist, he and his wife were able to escape to London. Around the same time, Bardeleben was accepted into a university in Scotland.

In 1940, while Bardeleben was preparing for his exams, he and other ‘enemy aliens’ were arrested in Edinburgh and sent to the Isle of Man. They were later deported to Canada on the SS Sobieski. Upon arrival, he was interned in Camp B (Ripples, New Brunswick) and Camp N (Sherbrooke, Quebec).

Bardeleben was released in 1942 as a sponsored agricultural student in Guelph, Ontario. In 1945, he was deployed to Germany as part of the Royal Canadian Medical Corps. After demobilization, he returned to Canada with his parents and continued his education, receiving a degree in chemistry from the University of Toronto. Gunter Bardeleben passed away in 2017.
Scope & ContentFonds is comprised of photographs, correspondance, ephemera, memoir, and newspaper clippings created or collected by Gunter Bardeleben. Records pertain to Bardeleben's experience in a Canadian internment camp as well as the lives and experiences of fellow internees. Records arranged in the following series: Photographs (1931-1952), Robert Wolf memoir (1990-1994), Correspondance and ephemera ([194-]-[2008]), and Newspaper clippings, Internment and former internees (1980-2009).
Archival HistoryAccession 2011.012
Immediate Source of Acquisition or TransferDonated to the VHEC by Gunter Bardeleben in 2011.
AccrualsNo further accruals are expected.
LanguageEnglish, German
System of ArrangementFonds is split into four series by the archivist.
RightsDonor relinquished rights to materials in collection upon their donation to the VHEC but the collection contains third-party materials for which copyright was not transferred. Researchers are responsible for determining the appropriate use or reuse of materials.
Rules or ConventionsISAD(G) informed by Rules for Archival Description
Archivist's NoteDescription created in 2022 by Ryan Sun and Michaela Sawyer.
Date of Description2022