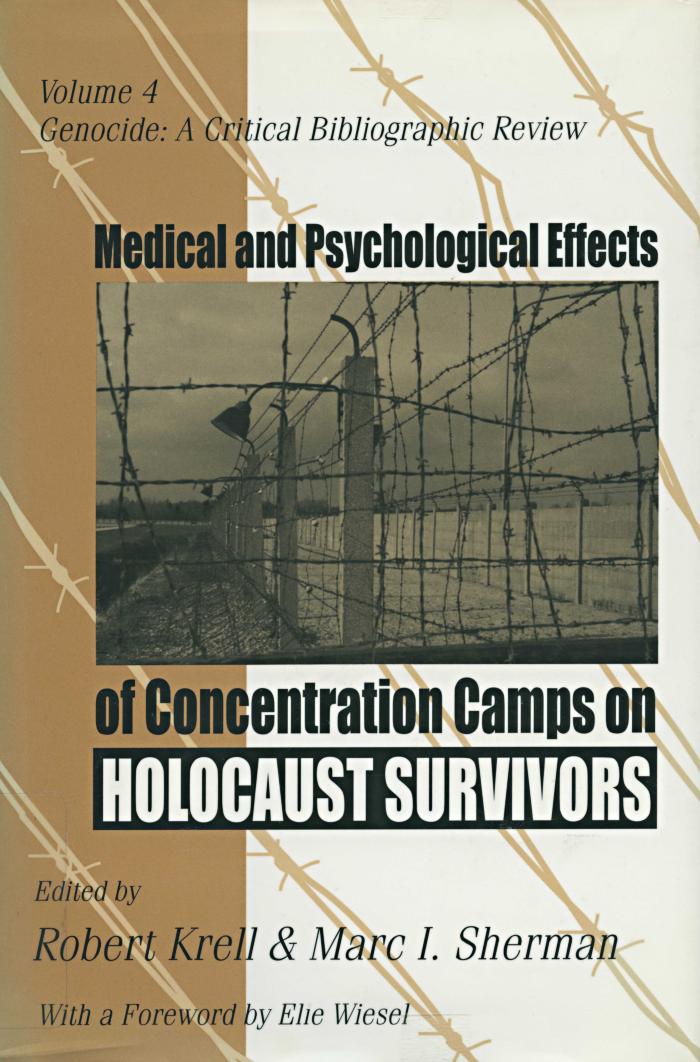 Medical and psychological effects of concentration camps on Holocaust survivors

Find or request this item
Medical and psychological effects of concentration camps on Holocaust survivors
Call No: 016.9405318 M48m
Available
Call Number016.9405318 M48m
Dates[1997]; ©1997
Statement of Responsibilityedited by Robert Krell and Marc I. Sherman ; with a foreword by Elie Wiesel.
Creators & ContributorsWiesel, Elie (contributor)
Krell, Robert (editor)
Sherman, Marc I. (editor)
Eitinger, Leo (contributor)
Institute on the Holocaust and Genocide (Jerusalem) (contributor)
Summary"This unique research bibliography is offered in honour of Professor Leo Eitinger of Oslo, Norway. Dr. Eitinger fled to Norway in 1939, at the start of World War II. He was caught and deported to Auschwitz, where he operated on, among others, Elie Wiesel who has written the foreword to this volume. After the war, Eitinger became a pioneering researcher on a subject from which many shied away. His contributions to the understanding of the experience of massive psychological trauma have inspired others to do similar work. His many books and papers are listed in this special volume of the acclaimed bibliographic series edited by Israel W. Charny of The Institute on the Holocaust and Genocide in Jerusalem. In order to acquaint users of this bibliography with the topic, two introductory articles are offered. The first is titled "Survivors and Their Families" and deals with the impact of the Holcoaust on individuals. The second, "Psychiatry and the Holocaust," examines the general impact of the Holocaust on the field of psychiatry. Robert Krell writes that until now the psychiatric literature has reflected critically on the survivor due to preconceived notions held by many mental health professionals. For many years, the exploration of victims' psychopathology obscured the remarkable adaptations made by some survivors. The problems experienced by survivors and possible approaches to treatment were entirely absent from mainstream psychiatric textbooks such as the Comprehensive Textbook of Psychiatry throughout the 1960s and 1970s. Fifty years of observations about survivors of the concentration camps and other survivors of the Holocaust (in hiding, as partisans, in slave labor camps) have provided a new body of medical and psychiatric literature. This comprehensive bibliography contains a plethora of references to significant pieces of literature regarding the Holocaust and its effects on survivors." —Book jacket
Contents
Physical Description xx, 365 pages ; 24 cm.
Carrier Typevolume
LanguageEnglish
PublisherNew Brunswick, NJ : Transaction Publishers
SeriesGenocide : A Critical Bibliographic Review ; volume 4
Notes"Institute on the Holocaust and Genocide" —Title page verso
RecognitionGifted by Dr. Robert Krell
Permalinkhttps://collections.vhec.org/Detail/objects/111

Institute on the Holocaust and Genocide (Jerusalem) (contributor)