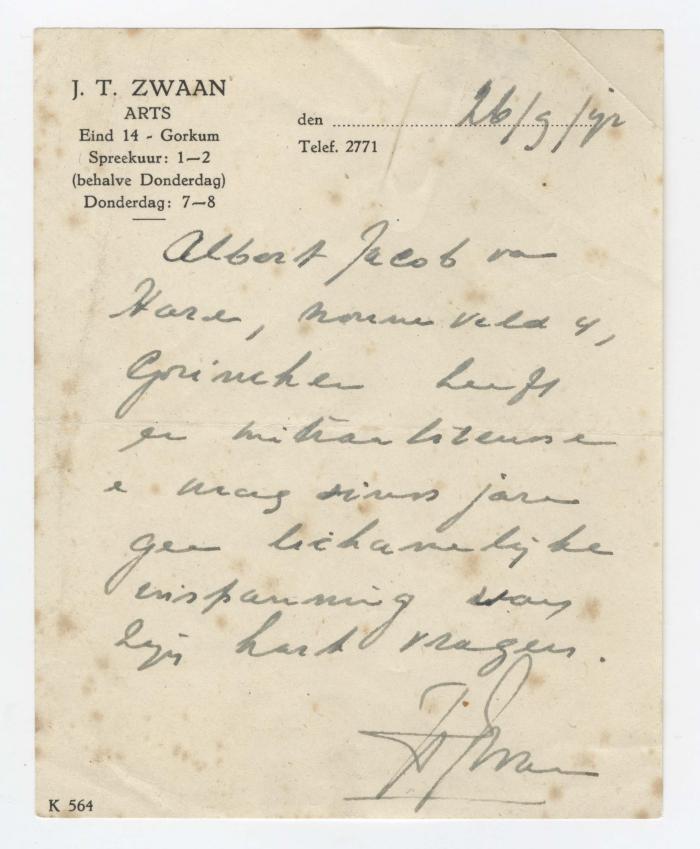 Resource TypeDocuments
Date of Creation26 September 1942
GenreCorrespondence & Philatelic Materials
Object ID1993.060.006
Previous NUmber93.08.201, 0093.008.0201
CreatorJ.T. Zwaan
Place of CreationGorinchem, Netherlands
DescriptionA note from a gentile doctor, J.T. Zwaan, attesting that Albert Jacob van Haren has a heart condition and is not able to do heavy work. This explanation was fraudulent and prevented van Haren from being deported from the Netherlands for forced labour.

The van Harens fled their home and went into hiding on October 15th, 1942. After hearing about round-ups in their town, Nazis arrived to arrest them that morning and they fled out the back door of their home. They spent the remainder of the war in hiding very near to their home in Gorinchem.

Dr. Zwaan was a family physician in Gorinchem and was involved in the Dutch resistance from early on after occupation. In addition to his work as a physician, he is believed to have helped Jews in hiding, distributed ration cards and helped allied pilots who were shot down over the Netherlands. He was arrested twice and imprisoned in Amersfoort concentration camp for a few months. At the end of the war, he was arrested by the Gestapo, but was released a few days later.
Materials/Techniquesink on paper
Measurements10.5 x 9 cm
LanguageDutch
ProvenanceGifted to the Vancouver Holocaust Education Centre in 1993 by Duifje Van Haren.
Classificationmedical records, physicians, memorandums
Legal StatusPermanent Collection
Auxiliary Documentation