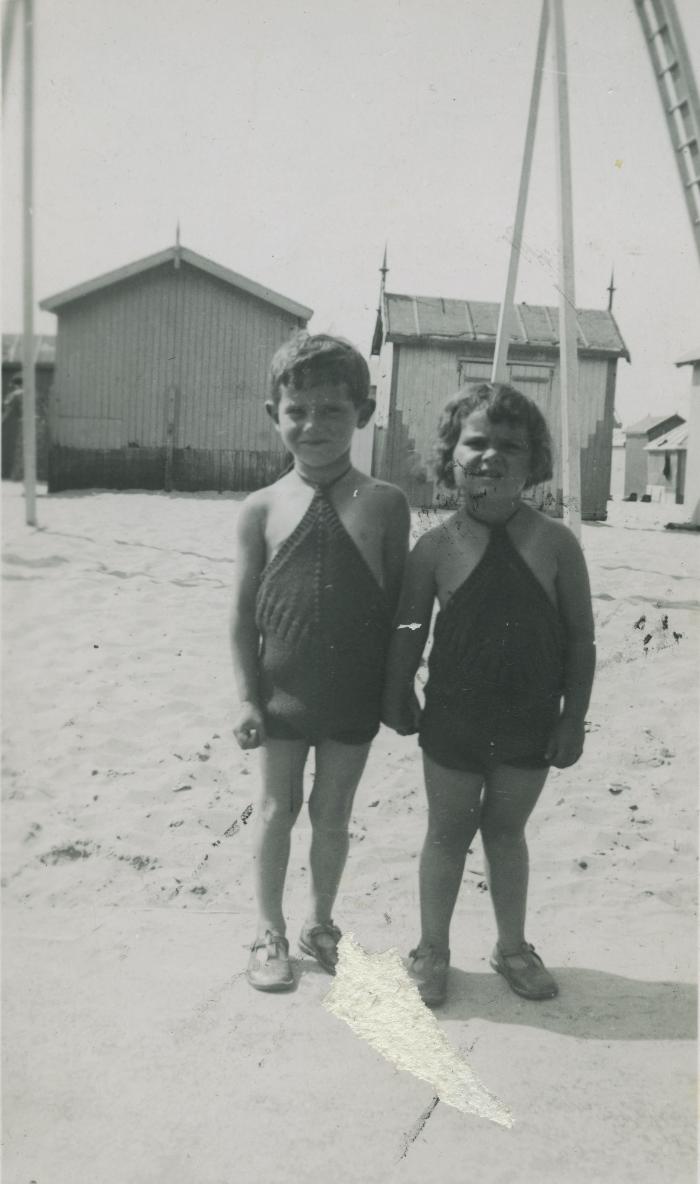 [Jannushka Jakoubovitch and her brother]
Access Points
Children
Pre-war life
Survivors
more...
Rights
Conditions on Use
Materials available for research and education purposes only.
Conditions on Reproduction and Publications
Permission to publish, copy or otherwise use these materials must be obtained from the VHEC.
Licensing

Resource TypeStill Images
Date of Creationoriginally created [before 1938]; digitized 2016
GenrePhotographs;Sports & Recreation
IdentifierRA003-00-00-02-04
CreatorJakoubovitch, Jannushka Elisheva
Location in CollectionJannushka Elisheva Jakoubovitch fonds > Digitized photographs
Administrative/Biographical HistoryJannushka Elisheva Jakoubovitch (b. June 20, 1933 in Paris, France, d. December 2019 in Vancouver) was a child survivor of the Holocaust from France. Born to Jewish parents—her father from Poland and her mother from France—she spent her early years in Paris before mounting political pressure forced her parents to send her and her brother to safe houses operated by the French resistance in the countryside. Her, her brother and parents survived the war isolated when one another, and lost everyone in their extended family.

After the war, the family had a difficult time reorienting to life together in Paris without their relatives. Jannushka left Paris at age 19 and travelled extensively, eventually working for the United Nations and other international non-governmental organizations. She came to Canada in 1967, married a United Nations employee in 1970 and had two children, a daughter in 1971 and a son in 1973. The family lived in Vienna and Rome, and then returned to Canada. Jannushka and her husband divorced in 1991 after living apart for many years, him in Vienna and her and her children in Victoria. In Victoria, she reconnected with her Jewish heritage, joined a synagogue, and began to speak openly about her childhood experiences. After her divorce she travelled to different cities in Canada and to Singapore. She settled in Vancouver and joined the Vancouver Holocaust Education Centre, where she was a dedicated outreach speaker and recognized for special contributions to Holocaust education and remembrance.
Extent & Medium1 photograph (tiff)
Scope & ContentItem is a digitized photograph of Jannushka Jakoubovitch and her brother before the Holocaust.
Caption, signatures and inscriptionsYann, my brother and me, Jannushka, before the Holocaust.
Archival HistoryRecords were maintained by Jannushka Jakoubovitch until their donation to the VHEC in 1996. A second accrual of photocopied articles and digital copies of family photographs was donated in August, 2016.
Part ofDigitized photographs
Existence and Location of OriginalsJannushka Jakoubovitch holds the original photograph
Existence and Location of Copies
Related Units of Description
Permalinkhttps://collections.vhec.org/Detail/objects/1702

In focus : the Holocaust through the VHEC collection. Faces of survival : photographs by Marissa Roth : teachers' guide