Home > Library > "Estimate your distance from the Belsen heap" : acknowled... 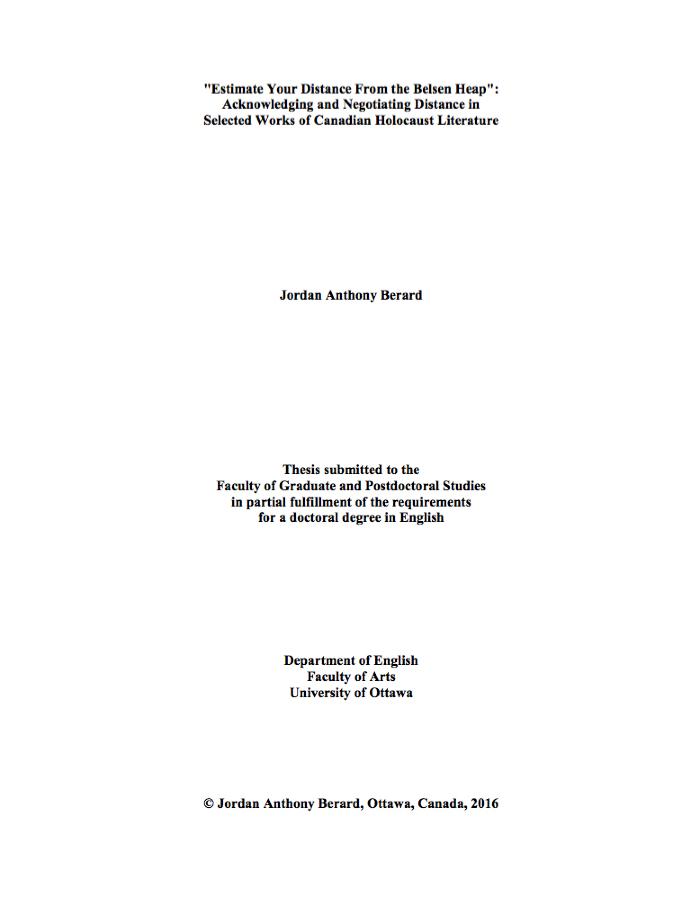 "Estimate your distance from the Belsen heap" : acknowledging and negotiating distance in selected works of Canadian Holocaust literature

Find or request this item
"Estimate your distance from the Belsen heap" : acknowledging and negotiating distance in selected works of Canadian Holocaust literature
Call No: Online - click URL below for access
Available
Call NumberOnline - click URL below for access
Dates©2016
Statement of ResponsibilityJordan Anthony Berard.
Creators & ContributorsBerard, Jordan Anthony (author)
Stacey, Robert David (contributor)
University of Ottawa. Department of English (contributor)
Klein, A. M. (Abraham Moses) (subject)
Layton, Irving (subject)
Cohen, Leonard (subject)
Eisenstein, Bernice (subject)
Steinfeld, J. J. (subject)
Findley, Timothy (subject)
Martel, Yann (subject)
Michaels, Anne (subject)
Summary"In his 1987 essay 'Canadian Poetry After Auschwitz,' Michael Greenstein argues that A.M. Klein's mock-heroic poem, The Hitleriad (1944), ultimately fails to portray the severity and tragedy of the Holocaust because 'it lacks the necessary historical distance for coping with the enormity' of the event. Greenstein's criticism is interesting because it suggests that in order for a writer to adequately represent the horrors of a traumatic event like the Holocaust it is 'necessary' for him to be distanced from the event. While Greenstein specifically addresses historical (or temporal) distance, Canadian authors writing about the Holocaust have also, inevitably, had to negotiate their geographical and cultural distance from the historical event as well. Not surprisingly, their works tend to be immensely self-reflexive in nature, reflecting an awareness of the questions of authority and problems of representation that have shaped critical thinking about Holocaust literature for over half a century. This dissertation examines the role that distance has played in the creation and critical understanding of representative works of Canadian Holocaust literature. It begins with an extensive analysis of the poetry and prose of geographically-distanced poet A.M. Klein, whose work is unique in the Canadian literary canon in that it mirrors the shifting psychological state of members of the Canadian Jewish community as news of the Holocaust slowly trickled into Canada. This is followed by a discussion of the Holocaust texts of Irving Layton and Leonard Cohen, both of whom experimented with increasingly graphic Holocaust imagery in their works in response to the increasingly more horrifying information about the concentration camps that entered the Canadian public conscience in the 1960s. The dissertation then turns its attention to the uniquely post-memorial and semi- autobiographical works of two children of Holocaust survivors, Bernice Eisenstein and J.J. Steinfeld, before focusing on the Holocaust works of Timothy Findley and Yann Martel, both of whom produce highly metafictional novels in order to respond to the questions of appropriation and ethical representation that often surround works of Holocaust fiction created by non-Jewish writers. The dissertation concludes with an analysis of Anne Michaels' novel Fugitive Pieces—a text that addresses all three types of distance that stand at the center of this dissertation, and that illustrates many of the strategies of representation that Canadian writers have adopted in their attempts to negotiate, highlight, erase, and embrace the distance that separates them from the Holocaust." —Abstract
ContentsIntroduction - "Distance Matters" Chapter One - "His Stuttering Innocence a Kind of Guilt": A.M. Klein and the Effects of Cultural Trauma Chapter Two - "Make Clear for Us Belsen": Irving Layton, Leonard Cohen, and the (R)evolution of Canadian Holocaust Literature Chapter Three - "Beyond My Reach": Bernice Eisenstein, J.J. Steinfeld and the Burden of Second-Generation Postmemory Chapter Four - The "Proper Subjects of Holocaust Fiction: Cultural Distance and the Issues of Holocaust Representation Conclusion - Measuring Distance in Anne Michaels' Fugitive Pieces
Physical Description 1 online resource (vi, 296 pages) : PDF file
Carrier Typeonline resource
LanguageEnglish
PublisherOttawa : University of Ottawa
Notes
URLhttp://hdl.handle.net/10393/34541, Access the freely available full text from the University of Ottawa
Permalinkhttps://collections.vhec.org/Detail/objects/1703