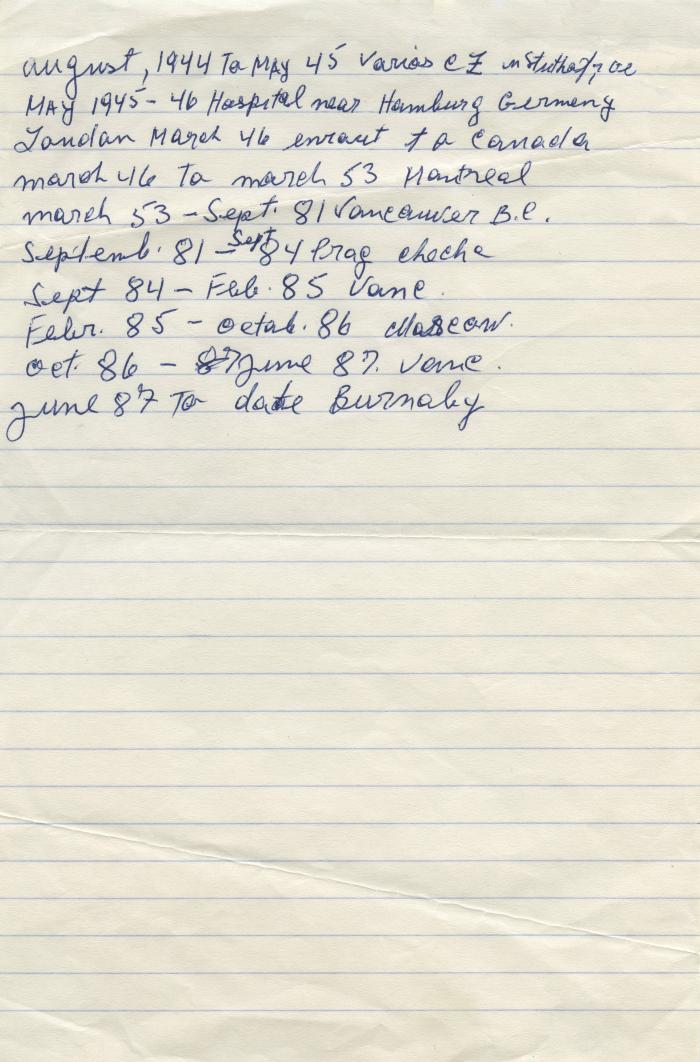 Access Points
Movement
Rights
Conditions on Use
Materials available for research and education purposes only.
Conditions on Reproduction and Publications
Permission to publish, copy or otherwise use these materials must be obtained from the VHEC.
Licensing

Resource TypeDocuments
Title NoteTitle supplied from content of item
Date of Creation[after 1987]
GenreDaily Life & Household
IdentifierRA013-03-00-00-02
CreatorPhillips, Jennie
Location in CollectionJennie Phillips fonds > JP personal papers series
Administrative/Biographical HistoryJennie Phillips (birth name Jennie Lifschitz, b. July 8, 1924, in Montreal, Quebec, Canada) was perhaps the only Canadian-born Holocaust survivor. Jennie was born to Abraham Lifschitz (b. 1899; d. 1970) and Paula Blumberg (b. 1897; d. 1941), Jewish immigrants from Liepāja (Libau), Latvia. Their eldest son, Ruben, was born in Liepāja in 1920. Jennie and her older sister, Dora (b. 1922; d. 2005), were born in Montreal. Shortly after Jennie was born, Abraham and Paula separated and Paula and the children left Montreal for Liepāja in November 1924. In Liepāja, Paula and the children lived in poverty. Jennie and her siblings were separated so that their mother could work. In 1931, Abraham sent for the two oldest children, Ruben and Dora, and they returned to Montreal to live with him. Jennie lived with her mother in Liepāja until her mother remarried in 1937 and moved to Telz, now Telšiai, Lithuania. Jennie went to live with her grandmother, Malke Blumberg (b. 1863; d. 1941).