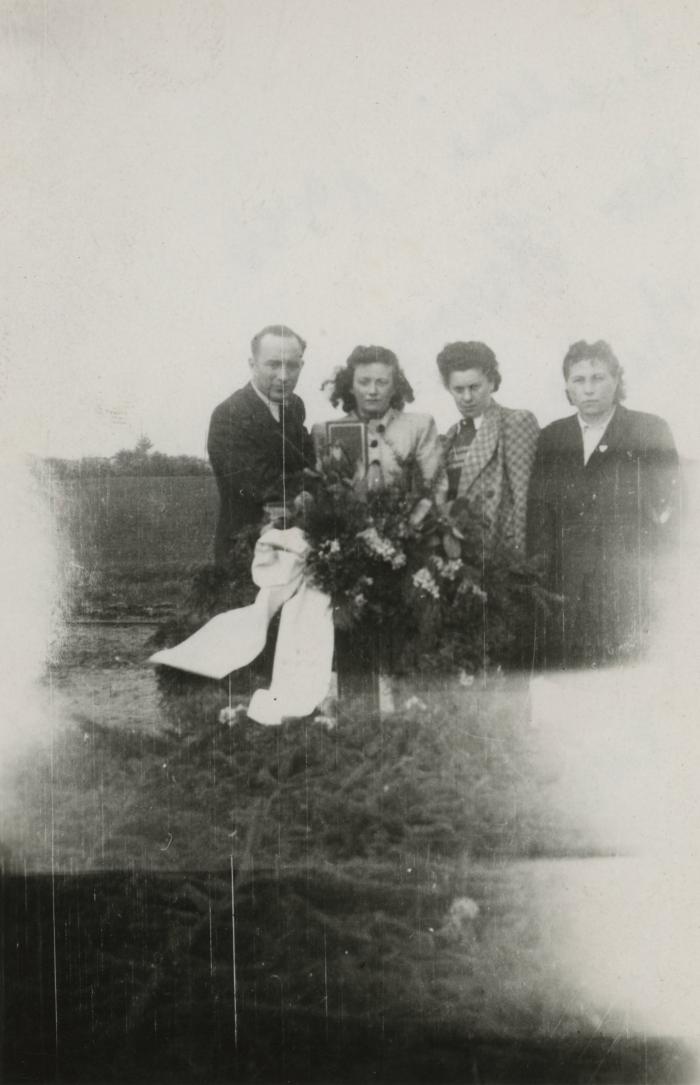 Access Points
Commemoration
Liberation
Rights
Conditions on Use
Materials available for research and education purposes only.
Conditions on Reproduction and Publications
Permission to publish, copy or otherwise use these materials must be obtained from the VHEC.
Licensing

[Photograph of unidentified man and three women with flower wreath]

Resource TypeStill Images
Date of Creation1946
GenrePhotographs
IdentifierRA014-01-00-00-07
CreatorMines, Sender
Location in CollectionSender Mines fonds > SM photographs series
Administrative/Biographical HistorySender Mines (b. March 18, 1909, in Skuodas, Lithuania), a Lithuanian Jew and Holocaust survivor, was born to Mayer Mines and Rachel Aizen. He was the youngest of nine children. The family was poor and Sender left school at age eight to work on the family farm. He eventually learned to be a shoemaker, or bootleg maker. In 1936, Sender moved to Kaunas (Kovno), which was, at the time, the capital city of Lithuania. In 1937, he married his Uncle Yossel’s daughter, Chaja Mines (b. 1904), who had a daughter, Miriam (b. 1932; d. 1944). Sender and Chaja had a son, Emanuel Mines (b. 1938; d. 1944).

Sender Mines died August 26, 1982, in Vancouver.
Extent & Medium1 photograph : black and white ; 9 x 6 cm
Scope & ContentPhotograph of unidentified man and three women standing with flower wreath at the liberation site in Neustadt in Holstein, Germany. Inscription in German and date, May 3, 1946, on back.
LanguageGerman
Archival HistoryRecords maintained by Sender Mines until his death in 1982. Records maintained by his daughter, Rachel Mines, until their donation to the VHEC in 2011.
Part ofSM photographs series
Permalinkhttps://collections.vhec.org/Detail/objects/2128

[Photograph of woman with grave wreath at liberation site in Neustadt in Holstein, Germany]

[Photograph of group of people at liberation site in Neustadt in Holstein, Germany]