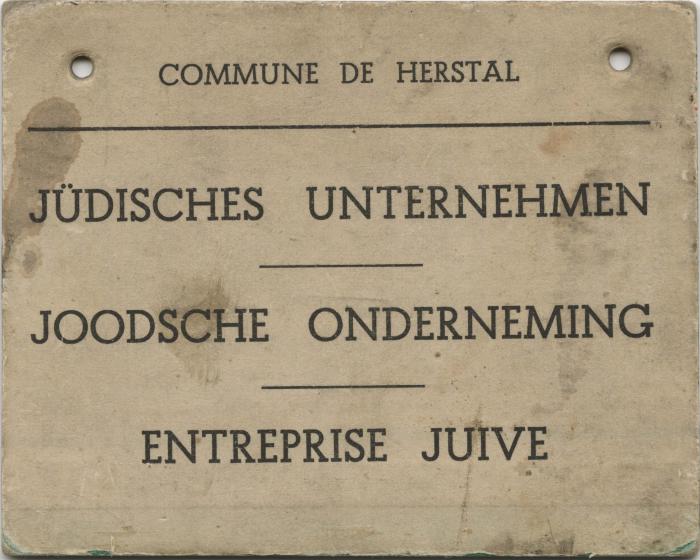 Resource TypeObjects
Date of Creation1941
GenreBusiness & Economics
Nazism & Propaganda
Object ID2008.009.001
CreatorIssued by local Belgian authorities
Place of CreationBelgium
DescriptionSmall, rectangular sign printed in black ink on heavy weight card stock. Holes punched in top corners.
Materials/Techniquespaper, ink
Measurements9.5 x 7.5 cm
InscriptionsCOMMUNE DE HERSTAL / JUDISCHES UNTERNEHMEN / JOODSCHE ONDERNEMING / ENTREPRISE JUIVE
[Jewish Business]
LanguageGerman, French, Dutch
Language Note"The sign was made in such haste by the Belgian authorities that were eager to show their allegiance to the Nazis, that there is a grammatical error in the German translation (Unternehmen is the verb "enterprise" not the noun)." -- interview with the donors
ProvenanceGifted to the Vancouver Holocaust Education Centre in 2008 by Charles Spica and Arnold Szpicak.

The donors aquired the sign from their parents who were the original owners of the textile business where the sign was displayed.
Classificationsignage
Legal Statuspermanent collection
NoteThe Szpicak family owned a textile store in Herstal, a suburb of Liege, Belgium. In 1941, they were ordered to hang this sign in the window of their shop. Two weeks afterwards, Belgian authorities returned with a larger replacement sign. Within a few months, the Szpicak family was forced to close their shop, which they had owned for about five years. They were forced into hiding to avoid deportation.
Permalinkhttps://collections.vhec.org/Detail/objects/2229

In Focus: The Holocaust through the VHEC Collection — Digital Captions (displayed)