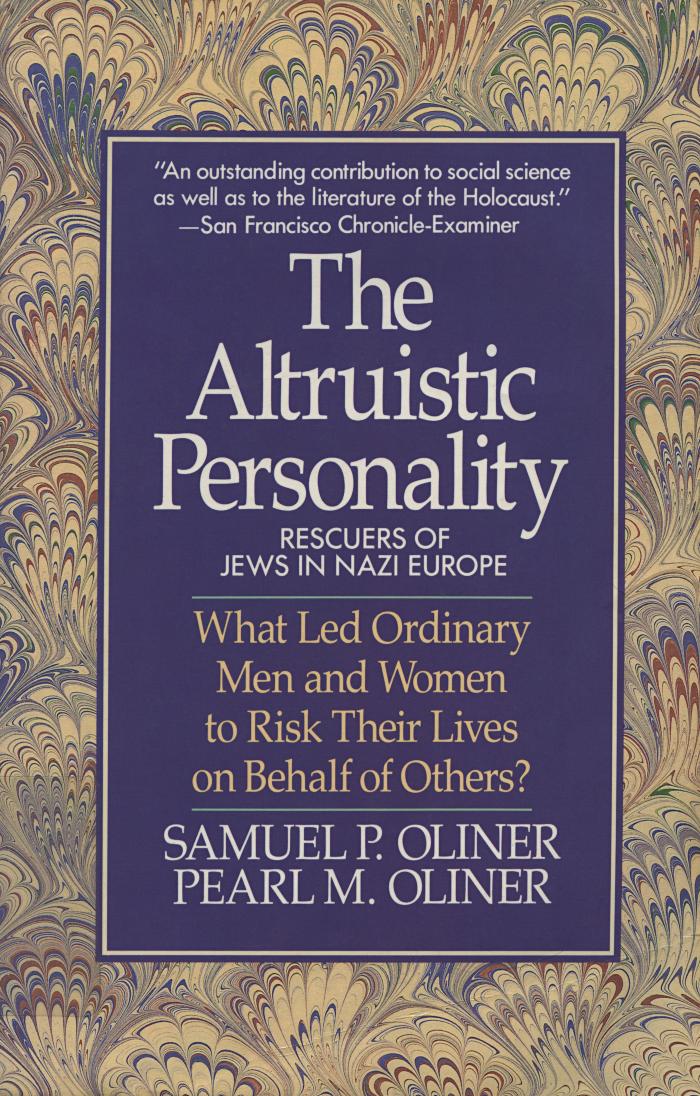 The altruistic personality : rescuers of Jews in Nazi Europe

Find or request this item
The altruistic personality : rescuers of Jews in Nazi Europe
Call No: 155.2 O46a
Available
Call Number155.2 O46a
Dates1992; ©1988
Statement of ResponsibilitySamuel P. Oliner, Pearl M. Oliner ; with foreword by Rabbi Harold M. Schulweis.
Creators & ContributorsOliner, Samuel P. (author)
Oliner, Pearl M. (author)
Schulweis, Harold M. (contributor)
Baron, Lawrence (contributor)
Summary"We regard the rescue of Jews as an example of an altruistic behavior. To be sure, there were those who helped Jews out of greed and self-interest; these individuals are not the subjects of our study. The individuals we are interested in are those who helped out  of humanitarian considerations alone—without material rewards of any kind. What makes their behavior of particular interest is not only the fact that it was undertaken in the context of terror but that it was undertaken on behalf of  an 'outsider' minority group, marginal under normal conditions and increasingly rejected and despised as the poisonous seeds of Nazism spread all over Europe... We interviewed almost 700 persons living in several countries in Nazi-occupied Europe—406 rescuers, 126 non-rescuers, and 150 survivors. The rescuers in our sample were all identified as such by Yad Vashem, Israel's memorial to the victims of the Holocaust... This book examines what led rescuers to choose their particular course of action. It looks at what led them to place themselves and their families at risk on behalf of Jews - often unknown to them previously—and what experiences, values, and personality characteristics moved them to act while others stood silently by." —Pages 1, 2 and 12
ContentsForeword / Rabbi Harold Schulweis
Preface
Acknowledgments Appendices
Notes
Selected bibliography
Index
Physical Description xxv, 419 pages ; 24 cm
Carrier Typevolume
LanguageEnglish
PublisherNew York : The Free Press ; Toronto : Maxwell Macmillan Canada
EditionFirst Free Press Paperback Edition
NotesIncludes bibliographical references (pages 382–414) and index
RecognitionGifted by Ronnie Tessler
Permalinkhttps://collections.vhec.org/Detail/objects/2468