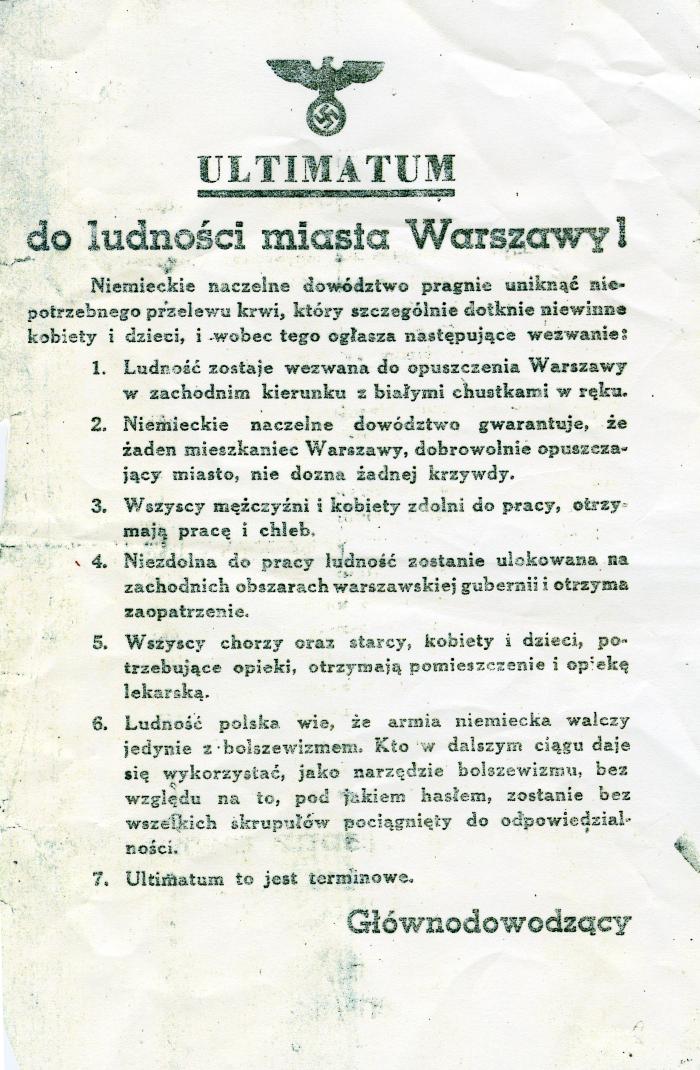 Resource TypeDocuments
Date of Creation[1939?]
Date NoteDate refers to date of original document; date of photocopy is unknown.
GenrePublications & Ephemera
IdentifierRA022-00-01-00-02
CreatorKomar, Leon
Location in CollectionDr. Leon Komar collection > German leaflet dropped from planes
Administrative/Biographical HistoryLeon Komar was born on January 30, 1915 in Warsaw. His parents, Moses and Sara Komar, temporarily relocated the family to Moscow when he was six months old. Komar's father died of typhus in Russia; his mother had a small factory, and imported and resold loofas and other items. Komar's aunt helped to care for Leon and his younger brother, Iza. Komar returned to Warsaw at the end of 1935. An uncle helped pay for his travel to and education in London, and in 1938, he went to Glasgow, Scotland to study medicine. In 1939, when the Second World War broke out, the Jewish community in Glasgow helped finance the completion of his degree. During this time, Komar corresponded with his family, who were living in the Warsaw Ghetto, through an uncle in the neutral city of Tangiers. Komar graduated as a doctor in July, 1944. After the Second World War, Komar searched for his family and learned that his aunt was deported to Treblinka; his mother and brother briefly found jobs in KG Schultz's factories, working for the German army. All perished.

While in the UK, working in a hospital, Komar met and married his wife, Liselott (née Frey), a German-born Jew. Komar immigrated to Canada shortly after their marriage, in 1947; he first settled in Edmonton. His wife followed, three months later. The couple moved to Fort St. John after Komar found work as a civilian medical practitioner on an air force base, then briefly lived in Hazelton, Kemano and Philadelphia before moving to Vancouver, where Komar had a private medical practice for over forty years. Leon and Liselott Komar had two children: David and Elizabeth, and two grand-children.

In 1955, Komar visited the Lohame HaGeta'ot ghetto, and briefly worked for health services of Israel. He met Noemi Judkowski; the two would correspond throughout their lives. Upon his retirement he earned a BA in Anthropology and an MA in Arts and Religious Studies. Liselott Komar passed away in 1991. In 1990, he translated and published Judkowski's memoirs, entitled A Requim for Two Families. In 1995, Komar self-published his own memoirs, and published Letters from the Warsaw Ghetto: 1938 to 1942, in 1996.
Extent & Medium1 document
Scope & ContentItem is a photocopy of a handbill dropped from German planes on Warsaw prior to the September, 1939 invasion. Document was given to Leon Komar by a Polish patient of his.
LanguagePolish
Part ofGerman leaflet dropped from planes
Permalinkhttps://collections.vhec.org/Detail/objects/4475