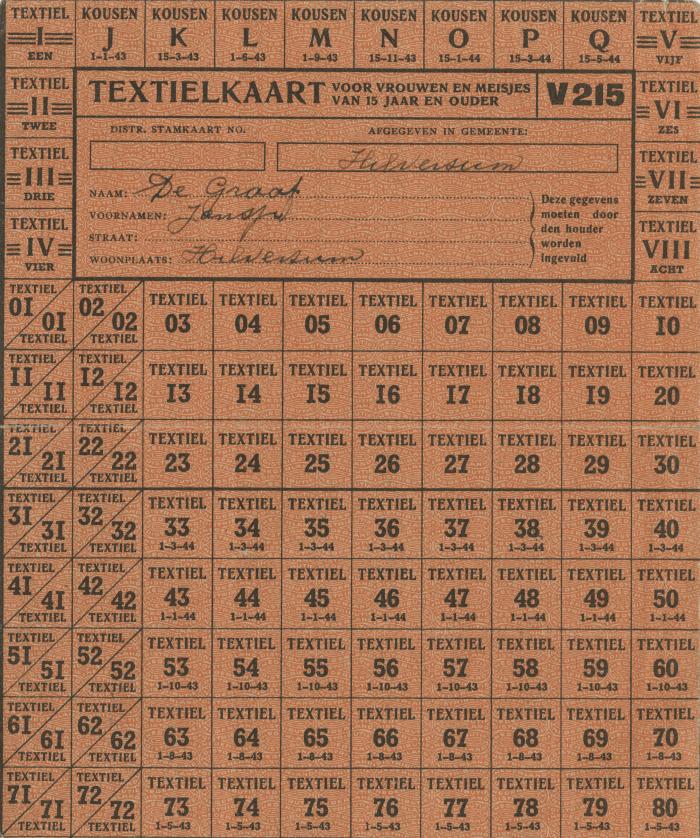 Louise Stein Sorensen graduated from the University of Amsterdam with a degree in Social Psychology in 1956. She married Eigil (Ike) Kaergaard Sorensen in her home town in January 1959. Shortly thereafter, she moved to British Columbia with her husband, a Danish immigrant who already resided there. They had two sons and three grandsons. Sorensen has been an outreach speaker for the Vancouver Holocaust Education Centre since 1985 and was a VHEC board member for ten years. Additionally, she was a member of the Gesher Project, a group of survivors and children of survivors who met regularly to create painting, writing and discussion about the Holocaust. Sorensen is a founding member of the VHEC’s child survivor group and a member of the board of the World Federation of Child Survivors of the Holocaust.
Extent & Medium1 document
Scope & ContentItem is a ration card used to receive textiles in Holland, which were rationed during the war.
LanguageDutch
Archival HistoryItem was formerly titled "Dutch ration card for textiles"
Part ofFamily records
Permalinkhttps://collections.vhec.org/Detail/objects/4515