Home > Library > The anatomy of the Nuremberg trials : a personal memoir 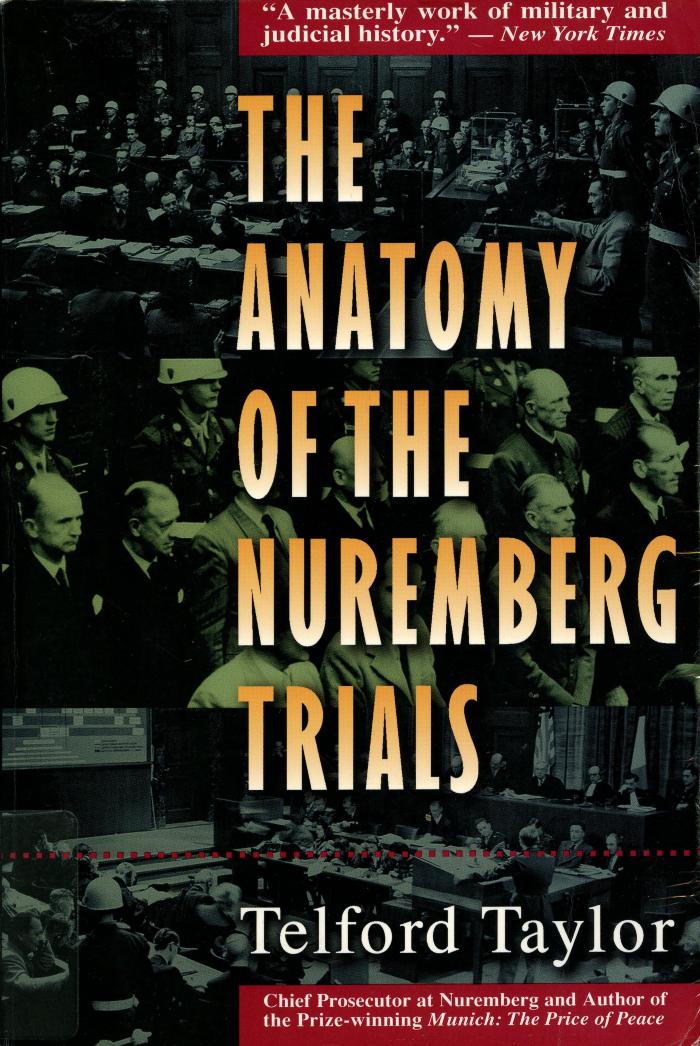 The anatomy of the Nuremberg trials : a personal memoir

Find or request this item
The anatomy of the Nuremberg trials : a personal memoir
Call No: 341.69 T24a
Available
Call Number341.69 T24a
Dates[1993]; ©1992
Statement of ResponsibilityTelford Taylor.
Creators & ContributorsTaylor, Telford (author)
Nuremberg Trial of Major German War Criminals, Nuremberg, Germany, 1945-1946 (subject)
Summary"In vivid recollections meticulously documented, Telford Taylor, the Chief Prosecutor at Nuremberg, portrays events as he 'heard, saw, and otherwise sensed them at the time, and not as a detached historian working from the documents.' The author's firsthand knowledge of what took place both inside and outside the courtroom—as well as his profound grasp of international law—permits him to break new ground in describing the actual trials, which began in November 1945. He details personal vendettas among the Allied representatives, the prosecutors' brilliance and their astonishing gaffes, the judges' private observations of the days' happenings, and the negotiations that preceded the handing down of sentences. Taylor's accounts of Goering, Hess, Kaltenbrunner, Ribbentrop, Speer, and their co-conspirators in the daily give-and-take of the trials are riveting. What emerges, finally, is a penetrating and chilling look at the courtroom drama that finally revealed the full horror of the inhuman acts committed under Hitler." —Back cover
Contents
Physical Description xii, 703 pages : illustrations ; 24 cm
Carrier Typevolume
LanguageEnglish
PublisherBoston : Back Bay Books ; Little, Brown and Company
EditionFirst Paperback Edition
Notes
RecognitionGifted in 1994 by Ivan & Laurie Gasoi and family
Permalinkhttps://collections.vhec.org/Detail/objects/4970