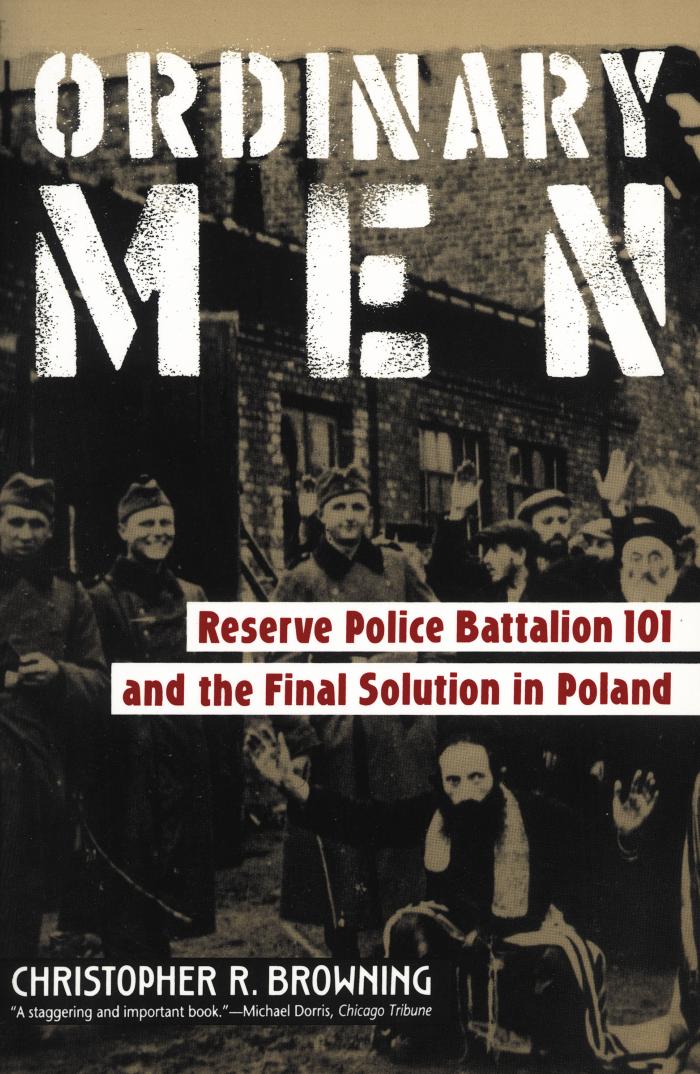 Find or request this item
Ordinary men : Reserve Police Battalion 101 and the Final Solution in Poland
Call No: 940.5318 B88o
Available
Call Number940.5318 B88o
Dates1993; ©1992
Statement of ResponsibilityChristopher R. Browning.
Creators & ContributorsBrowning, Christopher R. (author)
Nationalsozialistische Deutsche Arbeiter-Partei. Reservepolizeibataillon 101 (subject)
Summary"Ordinary Men is the true story of Reserve Police Battalion 101 of the German Order Police, which was responsible for mass shootings as well as round-ups of Jewish people for deportation to Nazi death camps in Poland in 1942. Browning argues that most of the men of RPB 101 were not fanatical Nazis but, rather, ordinary middle-aged, working-class men who committed these atrocities out of a mixture of motives, including the group dynamics of conformity, deference to authority, role adaptation, and the altering of  moral norms to justify their actions. Very quickly three groups emerged within the battalion: a core of eager killers, a plurality who carried out their duties reliably but without initiative, and a small minority who evaded participation in the acts of killing without diminishing the murderous efficiency of the battalion whatsoever. While this book discusses a specific Reserve Unit during WWII, the general argument Browning makes is that most people succumb to the pressures of a group setting and commit actions they would never do of their own volition." —Publisher
Contents Appendix: Shootings and Deportations by Reserve Police Battalion 101
Physical Description xxii, 231 pages, 8 unnumbered pages of plates : illustrations ; 21 cm
Carrier Typevolume
LanguageEnglish
PublisherNew York : HarperPerennial
EditionFirst HarperPerennial edition
Notes
RecognitionGifted in 1994 by Ivan & Laurie Gasoi and family
Permalinkhttps://collections.vhec.org/Detail/objects/5346