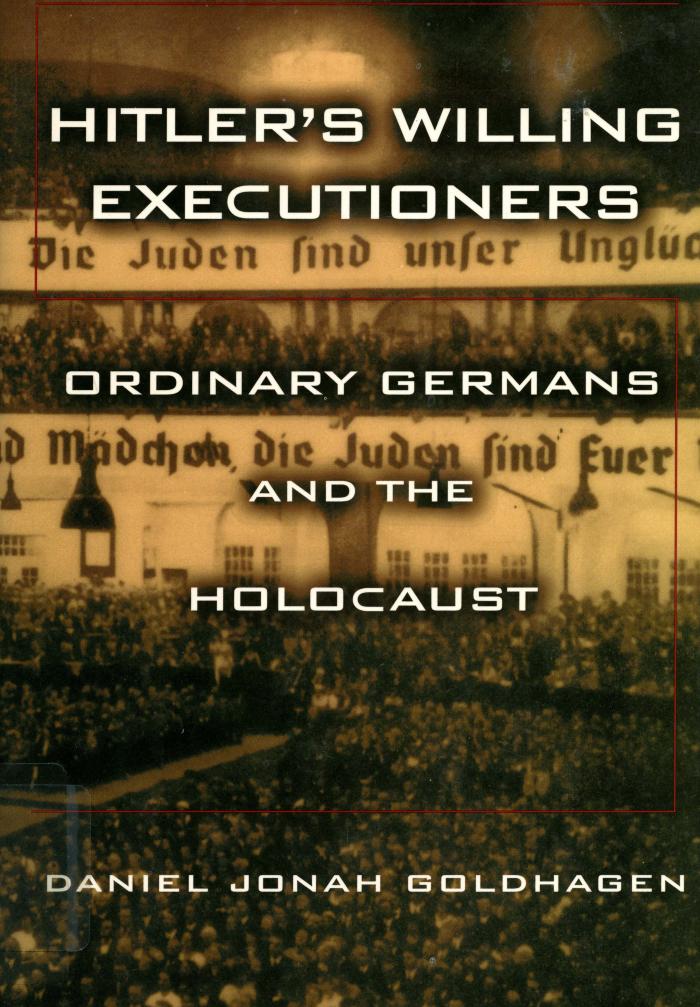 Find or request this item
Hitler's willing executioners : ordinary Germans and the Holocaust
Call No: 943.086 G61h
Available
Call Number943.086 G61h
Dates1996
Statement of ResponsibilityDaniel Jonah Goldhagen.
Creators & ContributorsGoldhagen, Daniel Jonah (author)
SummaryDaniel Jonah Goldhagen has revisited a question that history has come to treat as settled, and his researchers have led him to the inescapable conclusion that none of the established answers holds true. That question is: "How could the Holocaust happen?" His own response is a new exploration of those who carried out the Holocaust and of German society and its ingrained anti-semitism - and it demands a fundamental revision of our thinking about the years 1933-1945.; Drawing principally on materials either unexplored or neglected by previous scholars, Goldhagen marshals new, disquieting, primary evidence - including extensive testimony from the actual perpetrators themselves - to show that many beliefs about the killers are fallacies: They were not primarily SS men or Nazi Party members, but perfectly ordinary Germans from all walks of life, men (and women) who brutalized and murdered Jews both willingly and zealously.; And they did so, moreover, not because they were coerced (for, as he shows irrefutably, so many were informed by their own commanders that they could refuse to kill without fear of retribution) ... not because they slavishly followed orders (a view seemingly supported by Stanley Milgram's famous Yale "obedience experiment") ... not because of any tremendous social, psychological, or peer pressure to conform to the behaviour of their comrades (for no such evidence exists) ... and not for any reasons associated with Hannah Arendt's disputed notion of the "banality of evil." They acted as they did because of a widespread, profound, unquestioned, and virulent antisemitism that led them to regard the Jews as a demonic enemy whose extermination was not only necessary but also just.; Again and again, it is the killers' own words that give us a portrait, both shocking and immediate, of their world: the organization of their daily lives, how they did what they did, their reactions to it, even their recreations in the killings fields, which included everything from sports and entertainment to the hobby of taking snapshots of their deeds and victims - to be freely exchanged and collected among themselves - leaving a devastating record of self-indictment that the author reproduces here.; All of Goldhagen's documentary evidence is set within a fresh analysis of the phenomenon of German antisemitism itself, which revises many conventional views. He shows that it was already deep-rooted and pervasive in German society before Hitler came to power, and that there was a widely shared view that the Jews ought to be eliminated in some way from German society. When Hitler, ultimately, chose mass extermination as the only "final solution," he was thus easily able to enlist vast numbers of Germans to carry it out.
ContentsIntroduction: Reconceiving Central Aspects of the Holocaust

A nation on trial : the Goldhagen thesis and historical truth
People