Home > Library > We are witnesses : five diaries of teenagers who died in ... 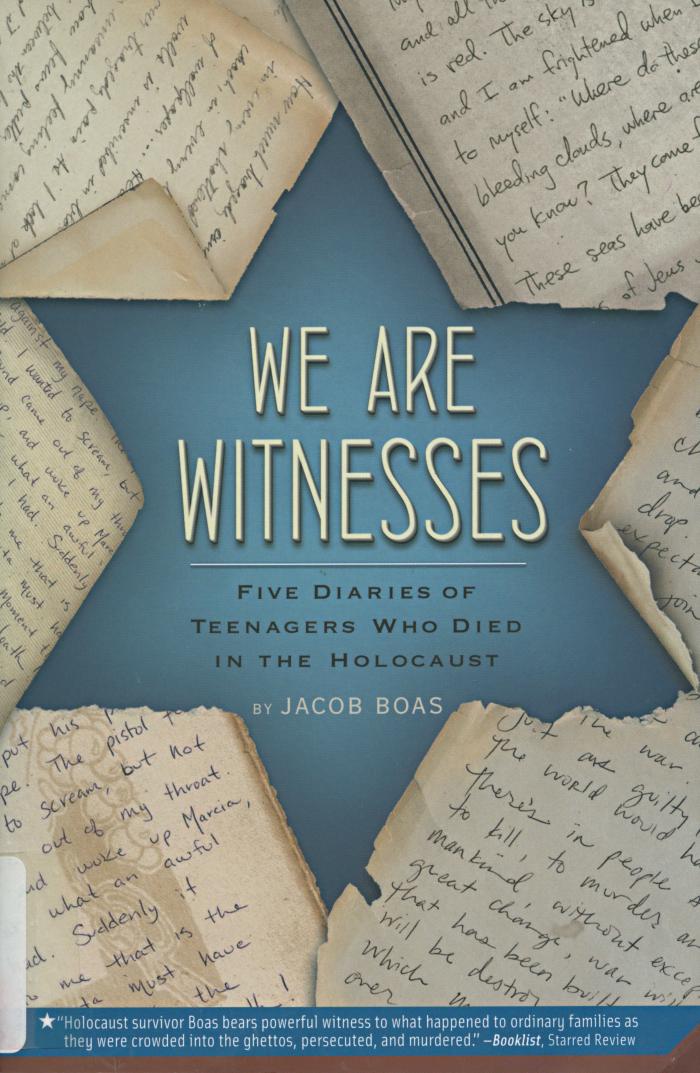 We are witnesses : five diaries of teenagers who died in the Holocaust

Find or request this item
We are witnesses : five diaries of teenagers who died in the Holocaust
Call No: YA 940.53161 B66w
Available
Call NumberYA 940.53161 B66w
Dates2009; ©1995
Statement of Responsibilityby Jacob Boas.
Creators & ContributorsBoas, Jacob (author)
McKissack, Pat (contributor)
Rubinowicz, Dawid (contributor)
Rudashevski, Isaac (contributor)
Flinker, Moishe (contributor)
Heyman, Éva (contributor)
Frank, Anne (contributor)
Summary"The five diarists in this book did not survive the war. But their words did. Each diary reveals one voice, one teenager coping with the impossible. We see David Rubinowicz struggling against fear and terror. Yitzhak Rudashevski shows us how Jews clung to culture, to learning, and to hope, until there was no hope at all. Moshe Ze'ev Flinker is the voice of religion, constantly seeking answers from God for relentless tragedy. Éva Heyman demonstrates the unquenchable hunger for life that sustained her until the very last moment. And finally, Anne Frank reveals the largest truth they all left for us: Hitler could kill millions, but he could not destroy the human spirit. These stark accounts of how five young people faced the worst of human evil are a testament, and an inspiration, to the best of the human soul." —Back cover
ContentsForeword / Patricia C. McKissack
Introduction
Map Notes
Index
Physical Description ix, 196 pages : illustrations, map ; 21 cm
Carrier Typevolume
LanguageEnglish
PublisherNew York : Square Fish/Henry Holt and Company
EditionFirst Square Fish Edition
Notes
RecognitionGifted in 2010 by Shannon LaBelle
Permalinkhttps://collections.vhec.org/Detail/objects/6