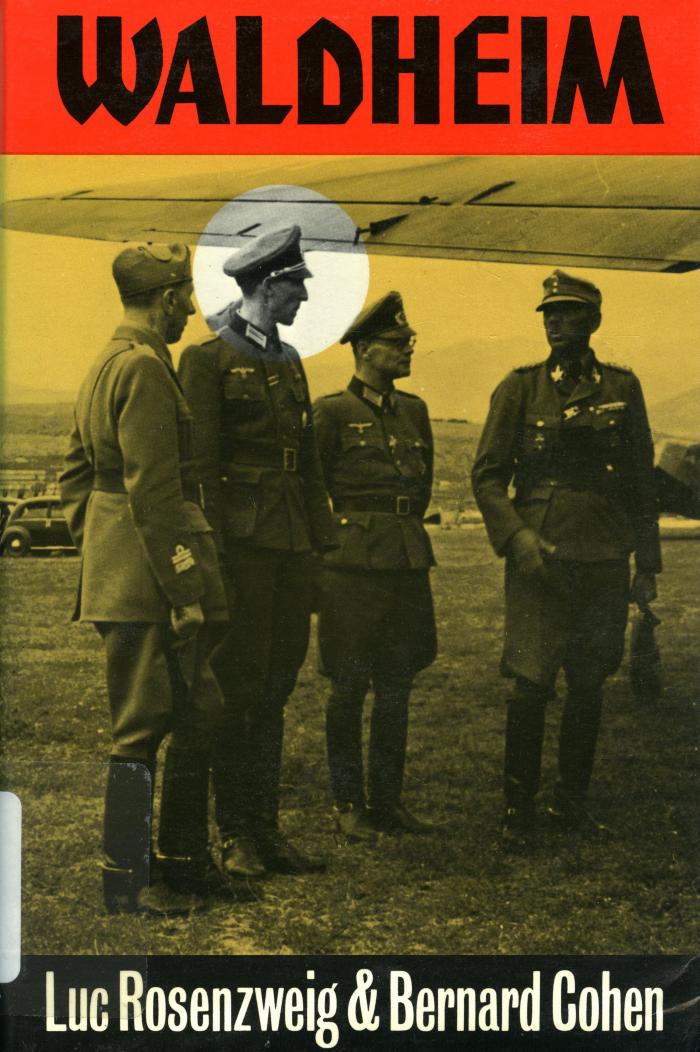 Find or request this item
Waldheim
Call No: 943.605 R81w
Available
Call Number943.605 R81w
Dates©1987
Statement of ResponsibilityBernard Cohen, Luc Rosenzweig ; translated by Josephine Bacon.
Creators & ContributorsCohen, Bernard (author)
Rosenzweig, Luc (author)
Bacon, Josephine (translator)
Waldheim, Kurt (subject)
Rosenzweig, Luc (subject)
United Nations. Secretary-General (subject)
SummaryIn official biographies and interviews, Kurt Waldheim — former UN Secretary General and current president of the Austrian Republic — claimed he had spent most of the Second World War as a law student in Vienna. During the past two years continuing revelations about how he actually spent those years has surfaced: research into the recorded evidence has revealed that as a young man Kurt Waldheim was a member of several Nazi organizations; he was an interpreter, then intelligence officer attached to headquarters of the Wehrmacht's Group Army E, the Army later implicated in grisly reprisals against civilians and partisans in the Balkans and the deportation of Greek Jews to the death camps. After the war, Yugoslavia's war crimes commission asked the Allies for Waldheim's extradition. Even in the face of mounting evidence to the contrary Kurt Waldheim steadfastly continues to deny any wrongdoing or coverup. The evidence didn't stop the Austrian people from electing him their president in a landslide vote on June 8, 1986. Today, Kurt Waldheim cannot enter the United States as a private citizen for he is on the Justice Department's "Watch List" of undesirables. Yet his international isolation has come to an end and he has been received by Pope John Paul II at the Vatican, Chancellor Helmut Kohl of West Germany, King Hussein of Jordan, and others.

What did Kurt Waldheim really do during World War II? How was he able to conceal his Nazi connections for so long? How much did the United States, Russia, and the other Allied nations know? How did the truth finally emerge after years of lies and deceptions? Why has Austria never accepted or been held accountable for its Nazi past? These and other important historical and moral questions are examined by two respected French journalists, Luc Rosenzweig of Le Monde and Bernard Cohen of Liberation, in Waldheim, the first book to explore and document the controversial details of Kurt Waldheim's life.

To unravel the mystery of Kurt Waldheim, the authors traveled to seven countries on three continents. The startling facts they discovered provide a shocking indictment, an incredible tale of 40 years of hidden truths, palliative deceptions, and international complicity.—Book jacket
ContentsIntroduction: The Duty of Memeory
1. The Origins of an Opportunist 2. The Hidden Years 3. The Lie, A Way of Life 4. The Silence of the Nations 5. The Game of Rumor and Chance
Physical Description 183 pages, 8 unnumbered pages of plates : illustrations, map, portraits ; 22 cm
Carrier Typevolume
LanguageEnglish, Translated from the Hebrew by Josephine Bacon.
PublisherNew York : Adama Books
Notes
RecognitionGifted by Myer Grinshpan
Permalinkhttps://collections.vhec.org/Detail/objects/6108