Home > Library > Lodz ghetto : inside a community under siege 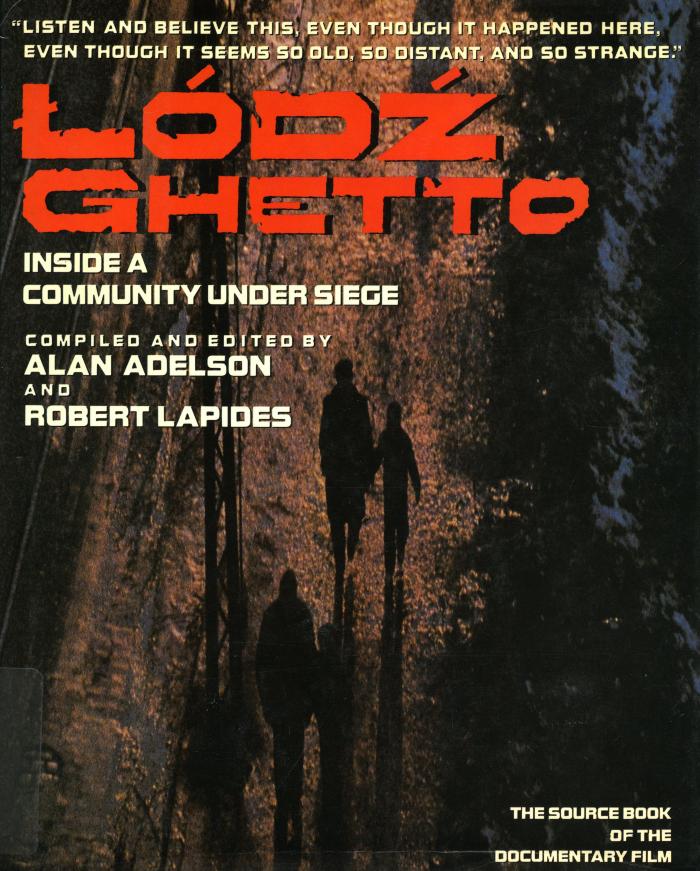 Lodz ghetto : inside a community under siege

Find or request this item
Lodz ghetto : inside a community under siege
Call No: 943.805 L824
Available
Call Number943.805 L824
Dates1989; ©1989
Statement of Responsibilitycompiled and edited by Alan Adelson and Robert Lapides ; with an afterword by Geoffrey Hartman ; annotations and bibliographical notes by Marek Web.
Creators & ContributorsAdelson, Alan (compiler)
Adelson, Alan (editor)
Lapides, Robert (compiler)
Lapides, Robert (editor)
Hartman, Geoffrey H. (contributor)
Web, Marek (contributor)
Summary"Lodz, a city in Southern Poland, had the second largest Jewish population in Europe. In 1940, the Germans forcibly created a ghetto of 200,000 Jews, a sealed self-governing labour camp for the German war effort. It was run by a Council of Elders, a police force and system of informers—all Jewish. From 1943 the ghetto was systematically emptied—first children and the elderly or infirm, then everyone. 200,000 people died, from starvation or in Auschwitz where they were shipped in cattle trucks. Only 800 survived, by hiding in cellars and attics until they were liberated by the Russians. But, while alive in the ghetto, the inhabitants tirelessly recorded their lives, their experiences, their miseries and their hopes. Diaries, letters, poems, sketches and photographs were secreted under floorboards, in cellars and in a dry-well. This testament has been gathered together and edited to provide an account of life and death inside the ghetto." —Publisher
ContentsAcknowledgments
A Collected Consciousness
Prologue Notes on Rumkowski
Notes on the Writers and Manuscripts
Afterword / Geoffrey Hartman
Glossary
Notes on the Text
Street Map of the Lodz Ghetto
Index by Authors
Physical Description xxi, 526 pages, 16 unnumbered pages of plates : illustrations (some color) ; 25 cm
Carrier Typevolume
LanguageEnglish, Translated from German, Hebrew, Polish, and Yiddish.
PublisherNew York : Viking
NotesIncludes bibliographical references (pages 519–522)
RecognitionGifted by Ronnie Tessler
Permalinkhttps://collections.vhec.org/Detail/objects/6166