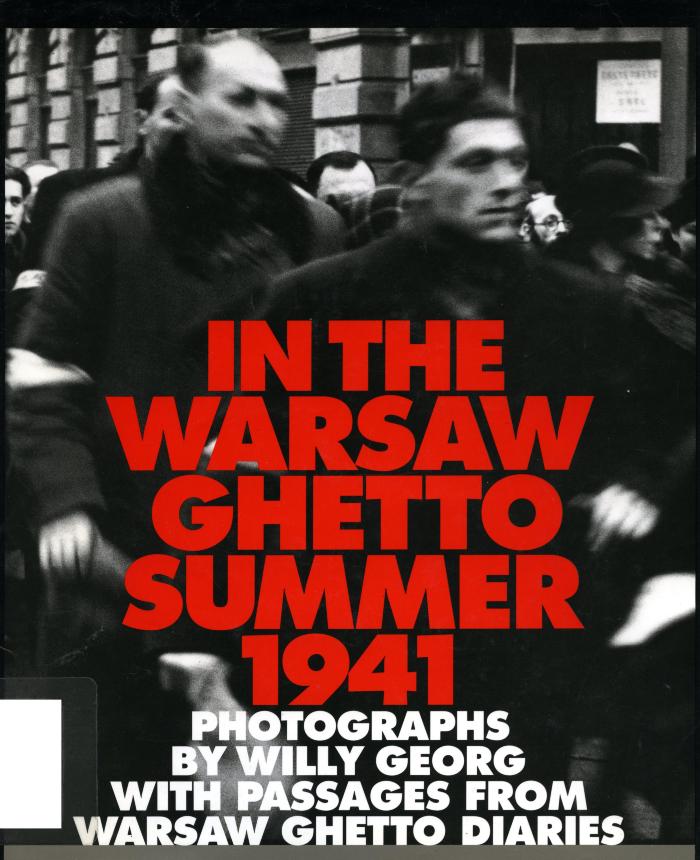 Find or request this item
In the Warsaw ghetto : summer 1941
Call No: 943.8053 I35
Available
Call Number943.8053 I35
Dates1993
Statement of Responsibilityphotographs by Willy Georg ; with passages from Warsaw ghetto diaries compiled and with an afterword by Rafael F. Scharf.
Creators & ContributorsGeorg, Willy (photographer)
Scharf, Rafael F. (compiler)
SummaryTaken by a German soldier and never before published, these photographs record a stage in the destruction of a great Jewish community—one that had been at the forefront of European culture and achievement. While the photographs examine a single day in the life of the gheto, the accompanying passages give voice to the years 1939-1943 through Warsaw Ghetto diaries, extracts from  the Polish Underground Press, and Himmler's final liquidation decree.

Rafael F. Scharf, who compiled the text, writes:" The people caught in these photographs, busy, feverish, emaciated, oppressed, but still living a life of sorts, are unaware of the unthinkably cruel end that awaits them shortly. Virtually none will escape a horrible death. One's instinct is to shout a word of warning—run! hide!—but it is too late."

Photographer Willy Georg was thirty years old and serving the Germany army as a radio operator. On the day his commanding officer issued him a pass and ordered him behind the ghetto walls, he brought with him his lunch and his Leica. He walked through those cruel streets, snapped four rolls of film, and had loaded the fifth before the police stopped him. They confiscated the film in his camera, but the four rolls he saved remained in his possession, the photographs unseen until recovered by Scharf fifty years later. A native of Poland, Rafael F. Scharf left Cracow for London shortly before the war. He later served as a member of a War Crimes Investigation team. He is one of the founders of "The Jewish Quarterly," a London literary and political magazine, and lectures and writes on Jewish and Polish topics. —Book jacket
Physical Description 111 pages : chiefly illustrations ; 28 cm
Carrier Typevolume
LanguageEnglish
PublisherLondon : R. Hale
RecognitionPurchased in 1993 by the Vancouver Holocaust Education Centre in honour of those amongst us who survived and to the memory of those who perished
Permalinkhttps://collections.vhec.org/Detail/objects/6219