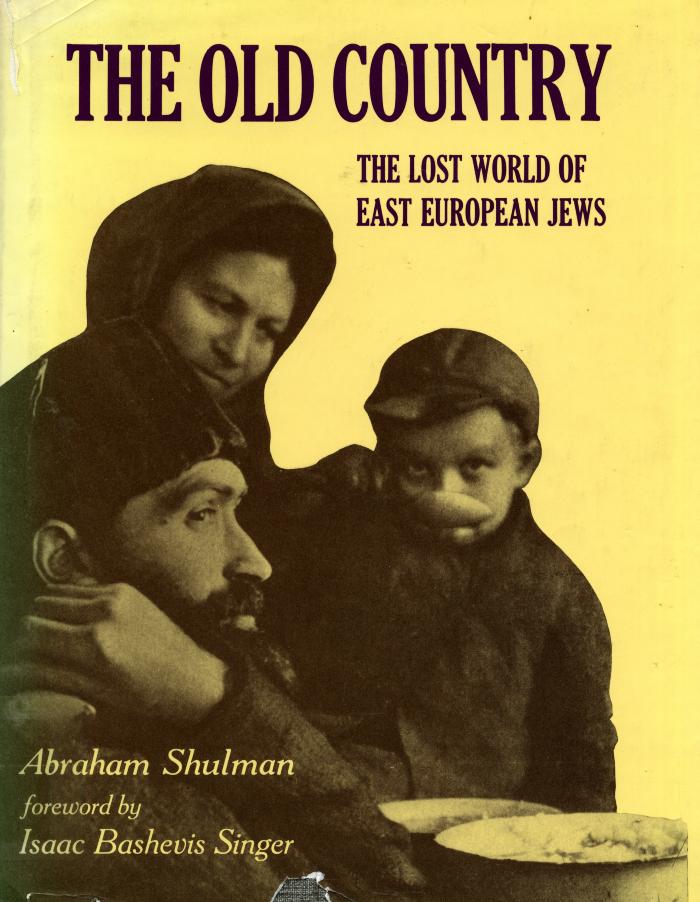 Find or request this item
The old country
Call No: 947 S56o
Available
Call Number947 S56o
Dates1974; ©1974
Statement of ResponsibilityAbraham Shulman ; foreword by Isaac Bashevis Singer.
Creators & ContributorsShulman, Abraham (author)
Singer, Isaac Bashevis (contributor)
SummaryHere is the first book of photographs depicting in full detail the rich and varied world of East European Jews. A rich repository of life in Polan, Lithuania, Rumania, and Russia, the pictures provide an unequalled portrait of the world that gave birth to the grandparents and great-grandparents of most American Jews.

in the 1920's, the New York Yiddish newspaper, The Forward, printed a weekly selection of photographs illustrating Jewish life in East Europe over the previous half century. The aim of the pictures was to show immigrant Jews the towns and the life that they had left behind. From the archives of The Forward, Abraham Schulman, a native of Poland and a notable Yiddish writer of short stories and essays, has selected hundreds of photographs to show exactly what East European Jewish life was actually like. It was not all persecution, poverty, and heartbreak. There were many light and joyous aspects: Pictures of children at play, adults at a village party, and family groups dressed in their Sabbath best to pose for a formal photograph all demonstrate that. Nor were the Jew as isolated from their neighbors as tradition maintains. Photographers here show a Jewish band entertaining at a Polish wedding, and a rabbi who was hired to give Hebrew lessons to the great Russian writer Tolstoy.

The photographs in The Old Country are divided into eight sections, each devoted to a particular aspect of Jewish life. Beginning with a chapter showing life in the shtetl, or small towns, where most Jews lived, the book follows with sections depicting the pleasures of childhood; the life of women; the varied and ingenious ways in which men, and women, made a living; religious traditions; the pious sect of Hasidim; and the secularization that began to erode the old values as early as 1880. A final section entitled "A Family Album" contains poignant portraits of the ordinary people who inhabited this vanished world. —Book jacket
Contents
Physical Description x, 210 pages : illustrations ; 29 cm
Carrier Typevolume
LanguageEnglish
PublisherNew York : Charles Scribner's Sons
Notes
RecognitionGifted by Elizabeth Kavanagh
Permalinkhttps://collections.vhec.org/Detail/objects/6269