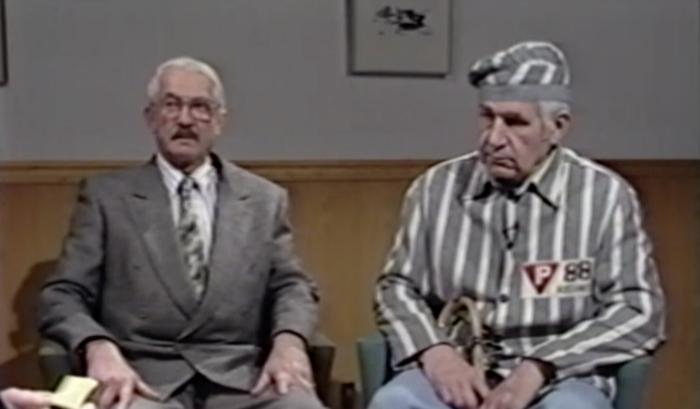 Michel M. was born in Białystok, Poland on March 20, 1927. He describes his background as a middle-class family of Jewish faith. He spent a year in the ghetto and arrived at Birkenau on December 28, 1942.

Sigmund S. was born in Toruń, Poland on May 11, 1923. He was raised Roman Catholic. He recalls his arrest on May 18, 1940 and placement on the first transport to Auschwitz as a political prisoner. Sigmund is wearing a replica of his camp uniform.

Throughout the interview, the development and growth of Auschwitz is discussed and described. They recall the building of crematoria, witnessing violence in the camp, and forced labour. They both recall observing American planes flying over the camp towards the end of the war.

Michel describes his arrival at Auschwitz and the selection process. Michel describes food in the camp, stealing and foraging for food. Michel recalls working in the Buna-Werke slave labour factory and Dora camp.

They both speak about their continued faith and role of religion in their lives. They each discuss contemporary understanding and attitudes about the Holocaust. They both discuss sharing their experiences with others and the importance of education to combat racism and antisemitism. They both share photographs.
Auxiliary Documentation

RightsVancouver Holocaust Centre Society for Education and Remembrance | Holocaust Documentation Project | Principal Investigator: Robert Krell, M.D. | Consent to Record and Retain Records (fn: Under the auspices of the Vancouver Holocaust Centre Society for Education and Remembrance) on file.
NoteTestimony was simultaneously recorded on video and audio cassette.
Funding NoteCataloguing and digitization of this testimony was supported by funding from the Government of Canada.
Permalinkhttps://collections.vhec.org/Detail/objects/629